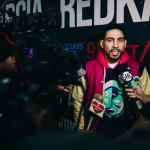 It’s pretty rare to see what Danny Garcia did, two days before the weigh in, and three days away from fight night.

At the famed and fabled Gleason’s Gym in DUMBO, Brooklyn Wednesday afternoon, Garcia, the ex junior welter champ and current top-tier player at 147,  yanked off his shirt, and did shadow boxing nude from the waist up. Garcia is maybe five pounds off weight, he told press at Gleason’s (photo by Amanda Westcott)

Yep, he looked pretty damn close to being on weight, and if you thought that would render him ornery, nah, the 31 year old Garcia was as relaxed as you’ll find a headliner days before a big-stage bout, which will run on Showtime.

OK, noted, I hear you all, you anti-Danny dudes; his foe, Ivan Redkach, isn’t regarded as a heavy threat to down the 35-2 fighter in Brooklyn.

He was working with Shane Mosley, but Shane’s elbow keeps him from working pads. So guess who stepped in? Shane’s dad, Jack Mosley. Jack made the rounds at Gleason’s, and checked in with other sages, like Hector Roca. Jack (left) remembered Hector when the Gleason’s fixture went to Cali, and saw Shane work out. (Picture by Michael Woods)

Anyway, I suspect Garcia would have been in a similar mode even if, as he desires, an Errol Spence or a Manny Pacquiao were to be meeting him Saturday.

“Everything in training camp has been very smooth,” Garcia said to assembled videographers and the odd print guy, after doing a shadow-box session, to show off majestic abs. “Sparring, the diet and running, it’s all gone perfectly. We’re on weight and ready to put on a great performance Saturday.”

I asked him if he’d seen Saturday night’s upset special, Jeison Rosario’s takedown of Julian ‘J-Rock’ Williams, in Philly, and on FOX.

Yep, I watched it, Garcia said.

I suspect he is, isn’t looking past the Ukrainian because he knows that a mega-fight is next for him if he wins. He seemed confident, but not close to cocky at Gleasons. Shoot, he’s 31, he’s a vet now. Fully. Not a grizzled one, but he’s made the rounds at all the rodeos, been there, done that, seen near it all.  And, maybe crucially, he sounded and looked into it. He told us that he’d fallen out of love with the sport, but a rest, some time off, and contemplation, had helped him re-discover his passion for pugilism.

“I’ve been boxing for 21 years,” Garcia said. “All of the big fights and all of the pressure, sometimes you get tired of it. Sometimes it takes something happening to wake you back up. I’ve fallen in love with the sport of boxing again. Sometimes you forget what made you love the sport in the first place. Fighting is what makes me happy though. My last camp before the Adrian Granados fight, I felt really good. I was happy again in this training camp. At this point in my career, I’ve been through it all already. I have to count my blessings and give my fans a great fight.”

And no, he’s not in BS mode, telling is that he’s thinking Redkach, nothing but Redkach, and isn’t even thinking the tiniest bit of a fight against Spence or Pacman.

“My mind was set on a southpaw so after we couldn’t have the Errol Spence Jr. fight, I wanted the next tough southpaw. We’re not looking past Redkach at all, but we wanted the southpaw work for that fight or a Pacquiao fight,” he said. “We’ll be all ready when those fights come up.”

Redkach, on the other hand, is thinking (hoping?) that Garcia will get J-Rock’d on Saturday. Sporting green hair (for the money he’d make in his next fight if he upsets Danny?) after having pink hair at the kickoff presser, he told the media he senses Garcia is looking past the challenger toward bigger game. Redkach has that proverbial puncher’s chance against Garcia in this Showtime main event. (Picture by Amanda Westcott)

“The biggest weakness I see in Danny is that he’s not taking this seriously,” said the fighter coming off a career-best win, over Devon Alexander. “He’s counting on this as a tune-up fight, and that’s a big mistake. This is not going to be a tune-up fight for him…Danny is already looking ahead to a fight with Errol Spence Jr. or Manny Pacquiao, but before he gets to them, he picked me. I know it’s because I’m a southpaw. But he’s going to get a rude wake up on fight night….This win will change my life and I’ve already worked my whole life to get to this moment. I want to win this fight and then the biggest fights at welterweight will be open to me. Right now I’m only focused on my fight Saturday night.”

His prediction? “I’m going to knock him out,” the green-haired hitter said. “That’s how I see this fight going. We’re going to leave it all in the ring and I’m going to come out victorious.”

The shocker win by Jeison Rosario, over J-Rock Williams has had staying power as a topic of discussion. Garcia was asked about it, and sure as heck, Jarrett Hurd was as well. No surprise, being that the “1” in his 23-1 record comes courtesy of J-Rock.

May 11, 2019, Hurd battled Williams, all three of his 154 straps on the line, in Virginia, in front of a big basket of home town friends and fam. And it wasn’t his night, it was J-Rocks.’ Soul searching followed; he changed hair color, and trainers, and Hurd us he isn’t looking past Francisco Santana.

“I’m so focused on taking care of Francisco Santana,” said the 29 year old boxer, a quite amiable type who is easy going and gracious with all press. “I can’t look past him. He’s a guy who comes forward. This is a fight where I want to see how things work out with my new trainer Kay Koroma, but Santana comes to fight just like Jeison Rosario did. I have to be on my toes.”

And will this be a brand new version of Hurd? I asked Hurd if he didn’t have green hair under that winter cap. He laughed, took off the cap, showed the media, no dye. (Picture by Michael Woods)

“People say this is the new Jarrett, but I feel like it’s the old me and I’m just getting back to it. I used my defense and my height against Frank Galarza and other earlier fights. But when I was training for Erislandy Lara, I was developing this pressure style and we didn’t have enough of the fundamentals set behind it,” he shared. “I look back at my fights and it kind of scares me all the hits I was taking. I had back to back Fight of the Year battles. Those were back and forth fights. I don’t want those each and every year. I want to win in one-sided fashion.”

No, he didn’t get spooked by J-Rock’s loss to Rosario…

“I’m not worried about the Julian Williams fight last weekend,” Hurd said. “I have to focus on January 25 or the same thing can happen to me. It just wasn’t his night that night. But J-Rock has bounced back before and I’d count on him bouncing back again.”

And yes, in case you were curious, in the back (middle?) of Hurd’s mind, he wants another crack at J-Rock, he informed us.

And also yes, the underdogs too had Rosario on the mind. Santana, a 25-7-1 hitter, 3-4 in his last 7, coming in off a loss to Abel Ramos taking on Hurd, said, “You can never count out the underdog. You saw what happened last week in the Julian Williams vs. Jeison Rosario fight. I have the utmost respect for Julian, but if you have two good hands, anything is possible. When the opportunity presented itself to fight someone like Jarrett Hurd, I couldn’t turn it down. I’ve faced a lot of elite fighters, but I know they chose me for a reason. But I also picked him for a reason. I’m trying to display a side that no one has ever seen from me before.” Fulton is a full step up, on paper, for Khegai, here loosening up at Gleason’s. (Picture by Amanda Westcott)

“I believe that I can land my power shots against Fulton,” said Khegai, promoted by Dmitriy Salita, who made the rounds at Gleason’s. “I can land the punch that will change the fight and I can do it in any moment. We’ll find out if he can stand up to the power on Saturday night. I might be considered the underdog, but this is boxing. Anything can happen. We’re going to fight. It’s just the two of us in the ring, man vs. man. No one’s opinion matters.”

Jeison Rosario and Julian Williams were nowhere near Brooklyn Wednesday, but their spirits, images of their recent fates, certainly were pin-balling in the minds of plenty of people who were.

I don’t expect Khegai, Santana or Redkach to follow the Rosario footsteps Saturday, but have covered the sport long enough to know it would be foolish to assume we don’t get at least one “theater of the unexpected” result in the top three scraps on the slate.

The post Jeison Rosario and Julian ‘J-Rock’ Williams are practically on Saturday Barclays card appeared first on The Ring.