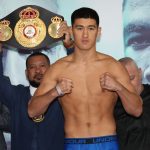 WBA light heavyweight titleholder Dmitry Bivol scored a unanimous decision victory against Lenin Castillo in an underwhelming bout that served as the co-main for Aleksandr Usyk vs. Chazz Witherspoon, streamed live on DAZN from the Wintrust Arena in Chicago, Illinois on October 12.

Bivol charged forward in the first round behind a stiff jab, mixing in feints and occasional looping shots to keep his opponent guessing. Castillo, a former Olympian for his native Dominican Republic, remained on the back foot, fighting tall and attempting to counter. The Russian began to mix in body punches and right hands in the second round. Bivol utilized speedy footwork to attack and then get out of range before Castillo could counter. As the middle rounds approached, the pace wasn’t exactly setting the world on fire, but it was skillful stuff and the defending champion was clearly doing the better work.

Bivol was throwing just about every punch in the book; looping left hooks, overhand rights, jabs and straight rights to the body. The only punch that was missing was the uppercut. About halfway through the sixth round he dropped Castillo with a short counter right hand during an exchange. The Dominican rose to his feet and fought back, landing a few hard body shots, appearing rejuvenated for the moment. Bivol remained calculated and continued to apply relentless pressure for the next couple rounds. Castillo would land the occasional counter, but it come after a combination from Bivol.

The ninth round appeared to be the most competitive round of the fight, with Castillo doing some of his best work. He landed a nice counter left hook that drove Bivol back, however it was once again after the Russian had teed off with a multi-punch combination. This pattern would play out throughout the championship rounds. Although he was competitive in spots and did some quality work, it was too little too late from Castillo. He needed to go for broke but simply never emptied the tank. Bivol meanwhile just continued to work and rack up rounds until the final bell.

The question now is what’s next for Bivol, who fights in a division where the top talent is represented by rival promoters. Can he secure a unification bout with the Gvozdyk-Beterbiev winner next year? Should Sergey Kovalev be successful against Canelo Alvarez next month, could Russian vs Russian unification showdown be in the future? Or will Bivol have to move down to super middleweight to get the big fights he craves? “I want fight the winner of Gvozdyk-Beterbiev or Canelo-Kovalev,” he said. “Why can’t I get the winner of Gvozdyk-Beterbiev? We are in the same division.”