Oleksandr Usyk can look to Evander Holyfield as cruiserweight-to-heavyweight benchmark
ringtv |  October 16, 2019, 03:36 AM 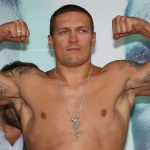 Oleksandr Usyk embarks on a new chapter in his boxing career Saturday night, when he makes his heavyweight debut by facing Chazz Witherspoon at the Wintrust Arena in Chicago, live on DAZN.

In doing so, the former undisputed world cruiserweight champion can look to Evander Holyfield as the benchmark for the boxer who made the move from cruiserweight to heavyweight look better than anyone else.

One would be hard-pressed to name a boxer who made the move up from cruiserweight to heavyweight look more mighty than Holyfield. “The Real Deal” collected his first world championship in the cruiserweight ranks back in July 1986, when he snatched the WBA title from Dwight Muhammad Qawi by a 15-round split decision.

Less than two years later, Holyfield was recognized as the undisputed and best cruiserweight on the planet, when he defeated Carlos de Leon in April 1988 to add the WBC and lineal titles to his WBA and IBF straps. At the time, boxers needed three world titles to be considered undisputed.

It was after that fight that Holyfield announced his move up to heavyweight, where he’d become the only four-time heavyweight world champion in boxing history, having defeated the likes of George Foreman, Larry Holmes, Riddick Bowe and Mike Tyson along the way.

At 32, Usyk is older than Holyfield was when he planted his flag in heavyweight soil. However, if the Ukrainian can get off to a hot start in the heavyweight division and make his presence felt immediately, he’d be likely to garner interest from heavyweight stars. In fact, Matchroom Boxing president Eddie Hearn already told Sky Sports that Anthony Joshua would be interested in facing Usyk if he’s successful regaining his unified world heavyweight titles against Andy Ruiz Jr. in their rematch on Dec. 7.

“Joshua was excited when we signed Usyk, he was excited to see him in the heavyweight division,” Hearn told Sky Sports. “Joshua saw Usyk a lot in the amateurs and he has never been scared to fight anybody, so he’d be up for fighting Usyk. Usyk is the mandatory but has to keep winning, and has to show that he is ready to fight [the champions] of the division.”

When speaking with ESPN last month, lineal champion Tyson Fury even cited Usyk as possibly “the next toughest challenge.”

WBC heavyweight champ Deontay Wilder told Sky Sports that “Oleksandr Usyk is not a threat to me” and “he’s too small for me” in comments that seemed to incite the Ukrainian to widen those signature eyes and say that he wants a crack at “The Bronze Bomber.”

So, as long as Usyk gets off to a strong start Saturday night, he could very well be challenging for a heavyweight world title soon.

Seeing what Holyfield did as a dominating cruiserweight entering the heavyweight picture should give Usyk all the motivation he needs to leave as indelible of a footprint.

The post Oleksandr Usyk can look to Evander Holyfield as cruiserweight-to-heavyweight benchmark appeared first on The Ring.