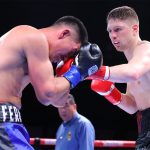 Jason Quigley battered late-sub Fernando Marin before knocking him in round three Thursday night inside The Hangar at the OC Fair in Costa Mesa, California.

With the victory, Quigley improves to 18-1, 14 knockouts.

The 28-year-old, who is originally from Laghy, Ireland and now resides in the Los Angeles suburb of Woodland Hills, was originally scheduled to fight Oscar Cortes, but Marin took the fight on two day’s notice when Cortes backed out of the fight.

Marin was game from the opening bout, but was no match for the aggressive Quigley, who has mostly fought as a middleweight but was fighting Thursday night at a catchweight of 164.4 pounds. Marin weighed 162.2 pounds.

About a minute into the second round, Quigley landed at will, backing Marin up against the ropes and landing vicious combinations to the head. Marin did not seem to be bothered by the punches, at times motioning with his hands for Quigley to move forward.

Midway through the third round, Quigley landed a right hand to Marin’s chin. The impact of the punch caused a delayed reaction where Marin dropped to the canvas, prompting an immediate stoppage by referee Jerry Cantu at 1:47.

In the co-feature, junior middleweight Ferdinand Kerobyan (14-1, 9 KOs) stopped Azael Cosio in the third round.

Kerobyan, who is of Armenian descent and resides in the Los Angeles suburb of North Hollywood, dropped Cosio twice in the opening round, both courtesy of hard jabs to the head. Cosio complained that the soles of his shoes would cause him to slip, but the knockdowns were legit.

In the second round, the 22-year-old Kerobyan unleashed a barrage of punches as he trapped Cosio against the ropes. A series of right hands dropped Cosio to the canvas against the ropes, prompting referee Thomas Taylor to stop the fight at 2:07.

In the opening bout of the ‘Thursday Night Fights’ stream that aired on the Golden Boy Fight Night (Facebook) page, heavyweight prospect Mihai Nistor (2-0, 2 KOs) of Romania knocked out Mexico’s Jaime Solorio (12-4-2 1 NC, 9 KOs) in the first round. A left hook to the body dropped Solorio to one knee, where he was counted out by referee Rudy Barragan at 2:24.

– Gregory Morales, a 19-year-old junior featherweight prospect from Villa Union, Mexico, knocked out Giovanni Delgado (16-10, 9 KOs) of Mexico City at 58 seconds of the fourth round. Morales improves to 11-0, 7 KOs.