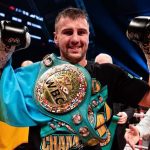 Gvozdyk and Atlas are relaxed. They exude confidence. Both are in a loquacious mood. They know the challenge ahead. They know Beterbiev (14-0, 14 knockouts) has a history against Gvozdyk (17-0, 14 KOs) when they meet this Friday in a WBC/IBF light heavyweight unification fight at Temple University’s Liacouras Center on ESPN (10 p.m. ET). Gvozdyk and Atlas don’t care.

This version of Gvozdyk is far better than the previous one, when he was beaten by Beterbiev as an amateur a decade ago.

There is something else you begin to notice about this version of Gvozdyk, whose name Gvozd actually means “nail” in Russian, hence his nickname, “The Nail.” You sense Gvozdyk is misplaced. He speaks and writes in three different languages (English, Russian and Ukrainian). His bright, blue eyes hardly miss a thing, and when Atlas speaks, Gvozdyk has a natural inclination to lean in and absorb. It’s easy to place Gvozdyk somewhere other than where he is—like in a courtroom dressed in a blue suit, white shirt and black silk tie, defending someone other than defending himself in a boxing ring.

Maybe it’s because Gvozdyk possesses a law degree. He graduated from the Ukrainian National Law Academy in 2014.

“I don’t know about (taking the bar exam in California), because I have a successful boxing career here, but what can happen after boxing, I don’t know,” Gvozdyk said. “Of course, if I stay in the United States, will my Ukrainian law degree apply here in the U.S. and in California, where I live? Do I need to go back to school and study again?

“I don’t know. We’ll see. When I went to the university, I didn’t think I would be a pro boxer. I would like to think I have plenty of my career ahead of me.”

Atlas grins, as Gvozdyk, 32, reveals this unknown not many in the boxing world are aware of.

“Alex allows his great intelligence to be an advantage to him,” Atlas says. “Dumb is getting in the ring and not being prepared. That’s never going to be the case with Alex. With him, what helps is his understanding of what you’re teaching him and his intellect in believing what I’m teaching he trusts and believes.

“You have to be able to put your mind around the things that you’re being taught. How can they perform if they don’t understand what you’re teaching them? Cus (D’Amato, the legendary Hall of Fame trainer who Atlas worked under for many years) always used to tell me, ‘Listen, as a teacher, your responsibility is to show them and convince them that what you’re teaching them will help them and make them better.’

“Who doesn’t want to be helped? Some people are more capable under pressure than others. That’s where Alex excels. You have to think properly under pressure. When there is no cloud that comes over you of fear; that oppressive feeling that comes over you when you’re in a difficult place can be paralyzing. It does paralyze some people. It’s because they don’t use their thought process. It doesn’t mean that they’re incapable, it just means under those conditions, they don’t have the capacity to think the way that you wish they would think.

“They don’t have the capacity to get to those places of thought. Alex has both. It’s why he’s a world champion. He knows right from wrong, and he has the capacity and wherewithal to take knowledge and use it under stress. Cus used to say, ‘Your knowledge isn’t enough.’ I asked, ‘What do you mean?’ Cus would say, ‘What good is the knowledge if only you know it?’ I’m lucky enough to have someone like Alex to recognize and accept what I’m giving him.”

Those conditions Atlas spoke about could not have manifested more than in the 10th round of Gvozdyk’s memorable 11th-round stoppage over Adonis Stevenson in December 2018. Gvozdyk took a heavy left from Stevenson with about 1:30 left in the 10th that rattled “The Nail,” who stumbled back into the ropes. Gvozdyk retreated for the last 90 seconds on the 10th, though was able to gather himself and rebound the following round. Gvozdyk brutally ended the fight against Stevenson in the 11th round.

Gvozdyk is like a sponge. He has the innate ability to slow things down in his head, control his breathing and not panic. It’s a special weapon when someone as powerful as Stevenson, or someone like Beterbiev, is closing in looking to finish. Atlas said that was one of the compelling elements that drew him to Gvozdyk. His victory over Stevenson, a brutal, granite-punching southpaw, told Atlas even more about the 2012 Ukrainian Olympic light heavyweight bronze medalist.

“I try to think in the ring, and I guess it helps,” Gvozdyk said. “I’m blessed to have the right information to absorb. Teddy gives me clean water to drink.”

Gvozdyk, the father of three, ranging in age of 10, 5 and 3, moved from the Ukraine to Oxnard, California, in 2014, which was one of his conditions in signing with Top Rank. For this fight on Friday, Daria, Gvozdyk’s wife, and the three children will stay home, which is now Camarillo, California. Gvozdyk likes it that way. Daria tends to get a little too nervous each time her husband steps into the ring.

Gvozdyk is well aware of Beterbiev. They fought in 2009 as amateurs. Beterbiev, Gvozdyk admits, got the better of him that day—but that comes with a caveat.

“He’s a tough puncher,” Gvozdyk said of Beterbiev. “I lost, but it was in 2009. I am different that who I was then. I’m not looking at revenge or something, no. I understand what I supposed to face and I know what to expect. I don’t really consider that a fight. They just put me in there against someone who had more experience (at the time) than I had.

“He’s strong and will come forward. He’s beatable. It will depend on how ready he will be, and how much focused I will be. I will be focused this time. I wasn’t ready for someone like him the last time. I am now.”

Not many may be willing to argue that point with Gvozdyk in a ring or a courtroom.

The post Oleksandr Gvozdyk is hoping to lay down the law on Artur Beterbiev this Friday appeared first on The Ring.