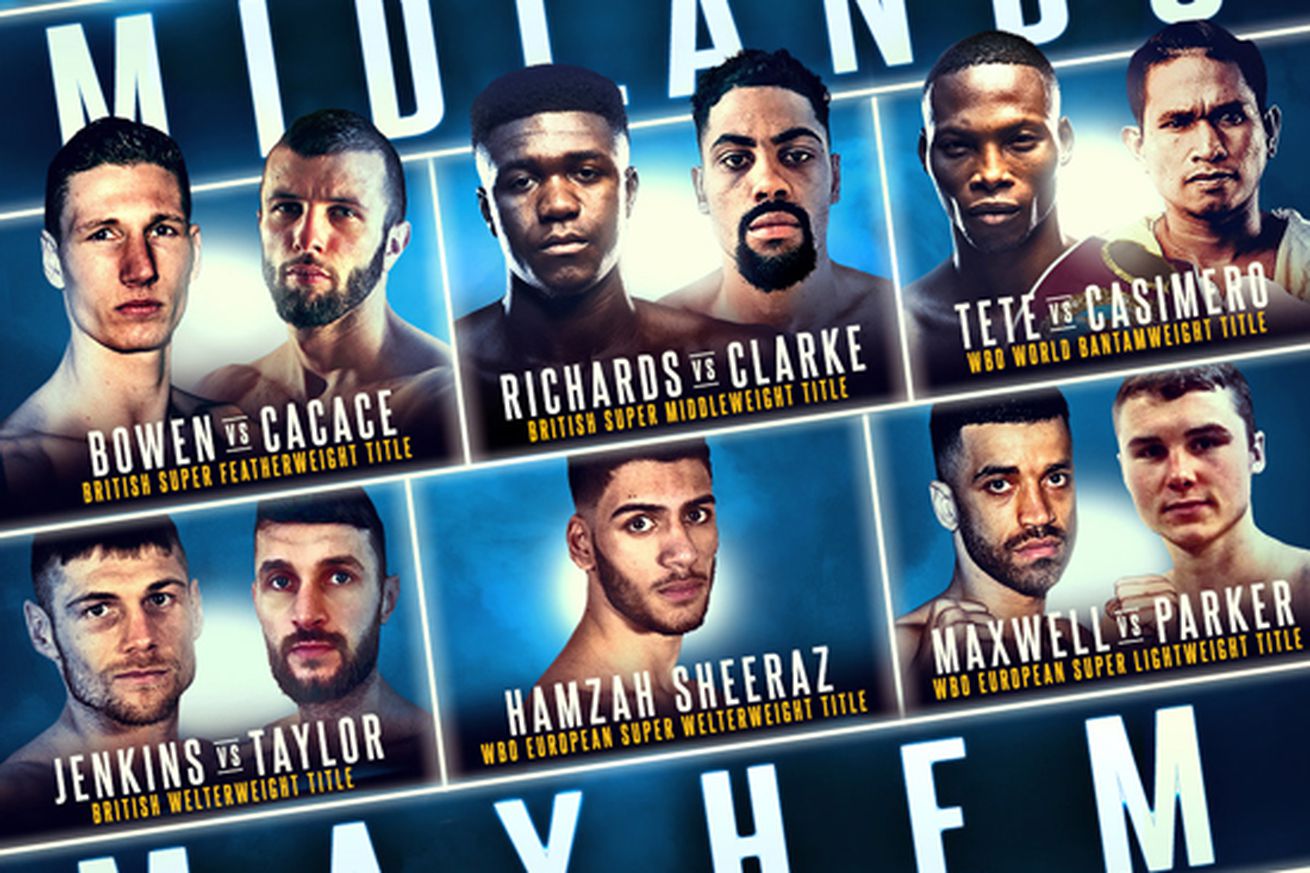 Three British titles, two WBO European titles, one Commonwealth title, and a world title will be on the line on November 30th when Queensberry Promotions rolls into Birmingham for “Midlands Mayhem.”

The event airs on BT Sport.

[Bowen] says: “The plan is to win British outright, although if a world title chance came first I would jump at it.”

Cacace dropped a unanimous points verdict when he challenged Martin J Ward for the British and vacant Commonwealth title in July 2017, but bounced back with two wins.

Cacace said: “There is a lot of momentum with Sam right now. I know what I am up against.”

The fight will be Bowen’s second defense of the title he claimed by beating Maxi Hughes last year.

Unbeaten super middleweights Lerrone Richards (12-0, 3 KO) and Lennox Clarke (19-0-1, 7 KO) duke it out for Richards’ Commonwealth title and the vacant British belt in the co-feature. Richards is coming off of a decision over veteran Tommy Langford, while Clarke will be taking a considerable step up.

New Malden’s Richards is hugely talented, but Halesowen’s Clarke (19-0-1, 7KOs) will have big support, just nine miles from his home. “It is a fight that will obviously motivate me and there is a lot on the line with it being for the British title. Winning would be another launch pad for my career,” said Richards.

Clarke said: “I’m his first real test and I’m prepared to win any which way I have to.”

The most notable matchup as far as world implications is the previously announced clash between WBO bantamweight champion Zolani Tete (28-3-1, 21 KO) and interim champion John Riel Casimero (28-4, 19 KO). Tete was forced out of a Super Series semifinal after a shoulder injury and will be making his first appearance since his quarterfinal victory over Misha Aloyan last October. Casimero, a former flyweight champion, has scored four consecutive knockouts but faces massive height and reach disadvantages.

“I have fully recovered from the shoulder injury and I will be testing it on Casimero’s chin. I am back,” warned the South African.

[Jenkins] said: “I have spoken to boxers who have seen Liam in the gym and they rate him highly.”

Middleton’s Taylor (21-1, 10KOs) booked his British title crack last November by avenging his only career defeat winning a split decision against Tyrone Nurse in an eliminator.

Taylor says: “I have to be honest I didn’t think Chris would beat Johnny Garton who I thought would be too big. He has improved a lot.”

“I want to be entertaining and have a good win, but I don’t particularly want to go viral in pulling out a win from the brink of defeat again!” said Maxwell.

Parker, 24, warned: “I’m a few years younger than him and think that this is my time to shine on the big stage.”

The viral moment in question.