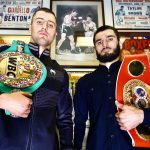 On Friday, Oleksandr Gvozdyk will put his WBC light heavyweight title on the line against IBF counterpart Artur Beterbiev in a potentially explosive unification match-up at the Liacouras Center in Philadelphia (ESPN and ESPN Deportes, 10 p.m. ET with preliminary bouts streaming on ESPN+ beginning at 7 p.m. ET).

Gvozdyk, who is rated No. 1 by The Ring at 175 pounds, was a standout amateur who represented Ukraine at the 2009 and 2011 World Championships and 2012 Olympics, where he won a bronze medal. Since turning professional in the spring of 2014, “The Nail” has risen to prominence, ripping the WBC title from Adonis Stevenson in thrilling fashion in December 2018. Since then, the 32-year-old boxer-puncher has defended his title once.

Beterbiev, who is rated No. 4 by The Ring, was also a top amateur, winning gold at the 2009 World Championships and having fought at the 2012 Olympics. The 34-year-old Russian power-puncher won the vacant IBF title, stopping Enrico Koelling in the 12th round in November 2017. He has made two successful defenses.

How will Gvozdyk (17-0, 14 knockouts) handle the marauding pressure Beterbiev will bring. Will Beterbiev (14-0, 14 KOs) find a way to deal with Gvozdyk’s impressive footwork that worked so well for him against the equally dangerous Stevenson? Both fighters possess fight ending power, so who will take the others power better?

Here’s how the experts see it:

TOM GRAY: GVOZDYK UD
“We’re looking at a potential fight of the year here. Both guys can really whack but they’re also super-durable, so I think we’re in for 12 rounds of hellacious combat. I give the edge to Gvozdyk because, for me, he’s a bit more versatile. He won’t get it all his own way, however, and will have to ship a few bombs, maybe even survive a knockdown, before prevailing on a close decision.”

RON BORGES: GVOZDYK PTS
“Beterbiev is a rough customer and a relentless one who will have his moments but Gvozdyk’s superior legs, jab and command of distance should blunt the bulk of his attacks and earn him a points victory.”

MICHAEL WOODS: GVOZDYK UD
“Gvozdyk’s the younger dude, the better boxer, comes in with the celeb trainer, the better story arc. Gvozdyk takes the unanimous decision. A real fight but, man, I am not confident in saying Beterbiev loses as a pro for the first time. He’s an immovable object who just might have slipped a half-notch in the last two years. Relative inactivity cannot have helped. Coinflip fight, truly. ‘The Nail’ drives home the win, by slim margin.”

MARTY MULCAHEY: BETERBIEV MD
“A great match-up that truly is a 50/50 proposition, given both men’s amateur and professional pedigrees are nearly identical. While Artur Beterbiev packs a bit of a better punch, Oleksandr Gvozdyk has better movement and overall skills, which counteract Beterbiev’s most potent weapon. Juxtapositions like that abound in this pairing. A draw is not a bad proposition as both sacrifice defense for offense. I lean toward Beterbiev negating Gvozdyk’s reach advantage with a straight jab and superior timing, which draw Gvozdyk into a firefight he can’t win. A knockdown (this time late in the fight) gives Beterbiev the advantage on the cards to win a majority decision.” Four months defeating Adonis Stevenson, Oleksandr Gvozdyk (left) was back in the ring against Doudou Ngumbu.

ANSON WAINWRIGHT: GVOZDYK TKO 10
“This is an outstanding fight and has ‘Fight of the Year’ potential. I think this fight will produce fireworks and could see either or both men on the canvas. I remember speaking to Teddy Atlas a few months ago and he was full of praise for Gvozdyk’s footwork. I think the Ukrainian will be dialed in and employ that to great effect to out-maneuver the vicious punching Beterbiev to get the better of things and force the stoppage in an engrossing fight in 10 rounds.”

LEE GROVES: GVOZDYK UD
“I believe that Gvozdyk has more strategic options at his disposal as well as the superior quickness and the sturdier chin. Although Gvozdyk has enough power to stop Beterbiev, I think he will be respectful enough of his opponent’s power to use his speed of hand and foot to dissect Beterbiev and walk out with the points win.”

NORM FRAUENHEIM: GVOZDYK UD
“Gvozdyk’s nickname, ‘The Nail,’ is as fitting as any in the business. He has a lethal combination of footwork that creates angles and heavy-handed power. There’s deadly accuracy in the way he lands his punches. Like a nail. He also steps into the ring as feared as just about anybody in the game today. He helped put Adonis Stevenson into a medically-induced coma last December. Artur Beterbiev is tough and single-minded. He likes to step inside but he does so at his own peril against Gvozdyk, who figures to win on all the cards throughout a punishing 12 rounds.”

DOUG FISCHER: GVOZDYK UD
“I know Beterbiev is an absolute beast and I’m aware of his stellar amateur credentials but I view ‘The Nail’ as the superior boxer-technician in the paid ranks and I believe the Ukrainian has been the beneficiary of better professional development. Beterbiev will push him to the limit but I envision Gvozdyk outboxing and even dropping the Russian (at least once) en route to a close 12-round unanimous decision.”

DUKE MCKENZIE (FORMER THREE-DIVISION WORLD TITLEHOLDER/TV ANALYST): BETERBIEV KO
“Beterbiev vs. Gvozdyk is quite clearly a battle of punchers. To add extra spice, it’s a unified world title fight. This won’t go the distance; that’s quite obvious. I like Beterbiev to get the stoppage between the fifth round and the 10th rounds.”

JOLENE MIZZONE (MATCHMAKER, MAIN EVENTS): GVOZDYK KO
“I am going with Gvozdyk in this one strictly because of the mental, activity and opposition coming up in the pros. The amateurs are very different from the pros and we all know the politics. I think both guys may be down at some point, which is going to make this a very interesting fight to see who has the champion mentality to rise from the canvas. Gvozdyk by knockout.”

KATHY DUVA (PROMOTER, MAIN EVENTS): GVOZDYK UD
“I think Gvozdyk is the better boxer and will be able to withstand Beterbiev’s inevitable early assault. Once that is over, I think that Gvozdyk’s experience fighting superior competition will kick in. Gvozdyk to win by decision.”

RUDY HERNANDEZ (TRAINER): BETERBIEV KO
“A tough fight for both but I give Beterbiev the edge as I think he’s the guy to beat in the division. I think it will be a good fight, I’m leaning towards the puncher in this one. I think Beterbiev wins by knockout within 10 rounds.”

ALEX KUTNETSOV (MATCHMAKER): GVOZDYK PTS
“I think this is 60/40 in favor of Gvozdyk. I think Gvozdyk will win because he is the more intellectual boxer and like his tandem with Teddy Atlas. I think he outpoints Beterbiev.” CAMILLE ESTEPHAN (PROMOTER, EYE OF THE TIGER): BETERBIEV KO
“Fights like these are great for boxing, I’m looking forward to this one. I think Beterbiev is currently the best 175-pound fighter in the world, in a league of his own. Beterbiev by knockout.”

VIKRAM SIVAPRAGASAM (MANAGER): BETERBIEV KO
“It will be a cracker. I am leaning towards Beterbiev. Gvozdyk is the better boxer but Beterbiev has raw power.”

REGGIE JOHNSON (FORMER TWO-DIVISION WORLD CHAMPION): BETERBIEV KO
“I’m going to pick Beterbiev by mid or late (-rounds) knockout. I think he is a bigger puncher who has faced better fighters. His resume is more impressive to me. Beterbiev by KO.”

SERGIO MORA (FORMER JUNIOR MIDDLEWEIGHT TITLIST/COMMENTATOR): BETERBIEV KO 9
“Very Interesting fight. If you look at their records, both are considered punchers, both impressive amateur pedigrees. Gvozdyk boxes looking for openings; Beterbiev creates them. I like Beterbiev by late KO. He’s one of the best at cutting off ring and sets up his power nicely. Beterbiev KO 9.”

VADIM KORNILOV (MANAGER): DRAW
“Both Gvozdyk and Beterbiev are very strong, very powerful fighters. Gvozdyk has, I think, has some technical advantages, a size advantage. Beterbiev has the power advantage. Both are very experienced. I do believe there’s gonna be knockdowns in the fight; I think each of them might be knocked down through out the fight. A very exciting fight to see, to me it’s a 50/50 fight.”

MIKE ALTAMURA (MANAGER): GVOZDYK UD
“I’ve coin-flipped 30 times and feel this could be genuine knockdown-filled firefight. But something tells me Gvozdyk will be ultra-cautious early, pick his spots, tie up inside and steadily build as the fight progresses.”