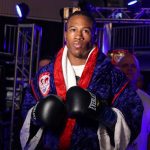 Patrick Day, the junior middleweight boxer who lapsed into a coma following his knockout loss to Charles Conwell this past Saturday, has died. The Freeport, Long Island, N.Y. native was 27.

The news was confirmed Wednesday by promoter DiBella Entertainment, listing “traumatic brain injury” as the cause of death.

The fight took place at Wintrust Arena in Chicago. Day was behind in the fight but appeared coherent until the final sequence in round ten, when he was knocked down by a left hook and his head hit the canvas violently. Day was removed from the ring on a stretcher and was taken to Northwestern Memorial Hospital, where emergency brain surgery was performed.

“Patrick Day didn’t need to box. He came from a good family, he was smart, educated, had good values and had other avenues available to him to earn a living. He chose to box, knowing the inherent risks that every fighter faces when he or she walks into a boxing ring. Boxing is what Pat loved to do. It’s how he inspired people and it was something that made him feel alive,” read the statement from DiBella Entertainment, which was released Wednesday evening.

A flood of condolences came in from around the boxing world, including from Eddie Hearn, the promoter of Saturday’s show, who wrote, “Devastated to hear the news of the passing of Patrick Day.I met him for the first time last Thursday,what a charming young man with a dream and a smile that lit up the room.”

Day’s trainer and manager, Joseph Higgins, was particularly close with his protege’. Higgins is a neighbor of the Day family, and remembers when his parents first brought him home from the hospital after he was born. As Higgins describes it, Day found other sports “awkward” and was drawn to boxing instead, learning how to box by hitting the bag in Higgins’ garage at age 14.

“He’s the nicest guy in the world. If you ever sat next to him and he didn’t talk boxing, you’d never even know the kid put a boxing glove on,” said Higgins in an interview earlier this year.

“He’s like a son, you’ve heard that 100 times before but he truly is like one of our own.”

Within a year of Day first putting on gloves, he won Junior Olympics and Junior Metros titles, Higgins says. Day fell short in the 141-pound New York Golden Gloves finals in 2011, but won the title at 152 pounds the following year and was given the Sugar Ray Robinson Award as the outstanding open class boxer of the tournament.

He also added a title at the 2012 U.S. National Championships, defeating Alex Martin (24-16) in the final, and was an Olympic alternate to Errol Spence after dropping a decision to the more experienced Amir Imam in the sixth straight fight of qualifiers, according to Newsday.

Lou DiBella, who promoted Day through most of his career, called him “the whole package” in an interview with The Ring earlier this year, saying “Pat’s a great kid, and he’s a terrific athlete. He was a great amateur, and he’s a good looking kid, he’s got every intangible…he’s extremely educated, highly intelligent.”

Day was an honors student at Freeport High School, Higgins says, and graduated from Nassau Community College with his Associate’s degree in Food and Nutrition. When his career began to slow down, after a pair of losses in 2015, he decided to pursue his Bachelor’s degree through online classes at Kaplan University (now known as Purdue University Global) as “something to fall back on”, finishing with a degree in Health and Wellness in 2017.

“It’s not that I didn’t believe in myself, it was, when am I gonna get another fight? Will it be for the right pay? Let me get myself some certainty because boxing doesn’t have certainty,” Day said earlier this year.

Day turned pro in 2013 and was undefeated through his first ten fights. Suffering two losses knocked him off lists of top prospects, but his vulnerability earned him fights against other young boxers who were on the way up. He won six straight, including fights against prospects Eric Walker, Kyrone Davis and Ismail Iliev. He lost a decision to Carlos Adames in June prior to getting the fight with Conwell.

Higgins had been off social media after the incident, but broke his silence to respond to Conwell’s open letter to Day, where the 2016 Olympian admitted he considered quitting boxing due to his grief.

“I too am distraught because I feel responsible but do realize there is no fault. Stay strong and please don’t think we blame you,” wrote Higgins on Tuesday.

A prayer service was held Tuesday evening outside the Freeport Police Athletic League gym, where Day had trained throughout his career.

Day is the latest high profile ring death to occur this year, following Maxim Dadashev, who died after his fight on ESPN, and Hugo Alfredo Santillan, both of whom died in July.

“Many people live much longer than Patrick’s 27 years, wondering if they made a difference or positively affected their world. This was not the case for Patrick Day when he left us,” added the statement from DiBella Entertainment.

The post Patrick Day passes away at age 27 from injuries suffered in fight appeared first on The Ring.