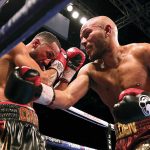 After fighting all of two rounds in 2019, Caleb Truax is hoping to make up for lost time. The super middleweight contender also hopes he can land a world title fight this year.

Before that could happen, Truax will have to win twice in a span of three weeks.

In his first fight in almost a year, Truax will face David Basajjamivule in a 10-round bout Saturday night at the Convention Center in Minneapolis, Minnesota.

Three weeks later, the super middleweight contender is scheduled to take on hard-hitting Ernest Amazu (25-5, 22 knockouts) of Ghana in another 10-round bout in Nashville, Tennessee. The Truax-Amazu fight will take place on the non-televised undercard of the Caleb Plant-Vincent Feigenbutz IBF super middleweight title fight on Feb. 15.

Truax (30-4-2 1 NC, 19 KOs), who resides in the Minneapolis suburb of Saint Michael, last fought on Apr. 13, fighting to a no-decision against Peter Quillin. The fight was stopped in the second round after Truax suffered a cut over his eye that was deemed too deep to continue, prompting the referee to stop the fight after consulting with the ringside physician.

The 36-year-old was scheduled to face Quillin in a rematch on Aug. 31, but he had to withdraw weeks before the fight after suffering a tear in his right Achilles.

After spending time rehabbing the injury and getting back into the shape, Truax welcomes an opportunity fighting Quillin again, but understands that is not in the immediate plans.

“It doesn’t look like it will be in the cards,” Truax told The Ring earlier this week. “I’d be open to a rematch if it were to position me to fight for a title again.”

Truax will face a fighter in Basajjamivule (16-4-1, 11 KOs), who has not fought in two and a half years, when he lost by knockout to then-undefeated Ruslan Fayfer.

He is expected to win but is not overlooking the Uganda-born fighter. Instead, Truax wants to get rounds in to prepare for better opposition, which includes his clash against Amazu in three weeks.

“Saturday is a fight to GET busy,” said Truax, who has a bachelor’s degree in sociology from the University of Minnesota. “I’ve only had two rounds in the last year and a half. I need to get back in the ring and get active.

“I’ve seen a bit of video on Basajjamivule. He looks to counter and loop wide, power shots, so I will stay behind a jab and not get caught with anything stupid while coming forward to pressure him.”

Truax is ranked No. 7 by The Ring. The division is very competitive, but Truax believes he is in the mix to face any of the top fighters.

Two fights within three weeks is a challenge, but Truax is confident he can look impressive while securing two victories over modest opposition in hopes of facing any world titleholder in the division.

“I absolutely want to fight for a (world) title in 2020. That plan is to get some rounds in to sharper up and make sure my Achilles is back to 100 percent, then jump right back into something by the end of the year.”

The post Caleb Truax to combat inactivity by fighting twice in three weeks appeared first on The Ring.