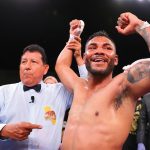 Andrew Cancio, who rose from obscurity in 2019 with a pair of upset knockout wins, has signed a “multi-fight promotional contract” with Top Rank, the company announced Thursday.

Cancio (21-5-2, 16 knockouts) of Ventura, Calif. is expected to make his promotional debut on a Top Rank on ESPN card in April.

The 31-year-old had been virtually retired from 2016 into 2018, but pulled off a pair of surprise victories over the previously unbeaten Alberto Machado to win the WBA “regular” junior featherweight title.

That Cinderella run came to an end in November, when he was stopped after seven rounds against Rene Alvarado. He was dropped by Golden Boy Promotions afterwards, but it didn’t take long to find a new promotional home.

“Andrew Cancio is one of the very best fighters at 130 pounds, a hard-working young man who deserves another opportunity to fight at the sport’s highest level,” said Top Rank chairman Bob Arum.

“He was a free agent, miraculously, and we didn’t hesitate to make a deal with him and his team.”

Cancio maintains his full-time job at the Southern California Gas Company, waking up at 4:30 a.m. to head to his day job before heading to the gym. His blue collar success story made him a fan sensation, and earned him a key to the city last April in his hometown of Blythe, Calif.

“I’m very grateful to begin the next chapter of my career with Bob Arum and the entire Top Rank team in my corner,” Cancio said. “I look forward to returning to the ring in front of my army of supporters and am fully prepared to fight my way towards becoming a world champion again. Thanks very much to my team, particularly my manager, Ray Chaparro, who has always believed in me and has been incredibly supportive of my career and instrumental in the success I’ve achieved.”

“Andrew and I are honored to join Top Rank as we move forward towards the rest of his career. I’ve known for a long time that Andrew is a world-class fighter and am very happy to begin working with Bob Arum and his outstanding team on our march towards another world title,” added Cancio’s manager Ray Chaparro.