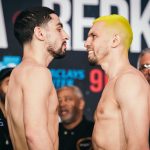 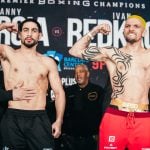 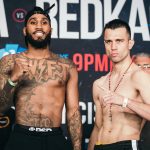 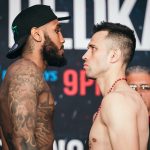 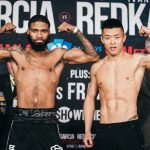 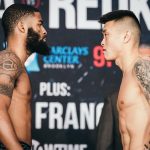 Danny Garcia weighed in at 147 pounds – a quarter pound heavier than his opponent Ivan Redkach – on Friday afternoon, ahead of their 12-round welterweight clash Saturday night at Barclays Center in Brooklyn, N.Y.

The fight will headline a Showtime Championship Boxing tripleheader, with the main card scheduled to begin at 9 p.m.

Garcia (35-2, 21 KOs) last fought in April, knocking out Adrian Granados in Carson, Calif. Prior to that, he lot a hard-fought decision to Shawn Porter for the vacant WBC welterweight title, and is fighting to get back into contention after nearly three years without a world title belt.

“We’re going to go in there and fight the Danny Garcia fight,” said Garcia, 31, of Philadelphia. “If he wants to brawl, he can do his thing, but just don’t get too excited because I’ve got two hammers waiting for him. Don’t try too hard because you might knock yourself out.”

Redkach (23-4-1, 18 KOs) of Los Angeles by way of Shostka, Ukraine is riding a three fight win streak, highlighted by a sixth round KO of former champ Devon Alexander last June.

“This training camp, I didn’t have to work at losing weight, I just had to work at beating Danny,” said Redkach. “I believe in my game plan, I believe in the training camp that we had, that’s why I’m going to knock him out. I’ve already visualized it.”

In the co-main event, Jarrett Hurd (23-1, 16 KOs) is looking to bounce back from his first career defeat last June to Julian Williams. The former junior middleweight champion weighed 154 1/2 pounds for the ten-round non-title bout against Francisco Santana (25-7-1, 12 KOs), a tough spoiler from Santa Barbara, Calif. who has pulled a number of upsets in his career.

All photos by Amanda Westcott/SHOWTIME