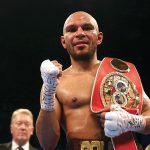 Truax, who once held the IBF super middleweight title, had not fought since Apr. 13, when he fought to a no-decision after his fight against Peter Quillin was cut short due to a cut over his eye from an accidental clash of heads during the fight. Truax and Quillin were scheduled to fight in a rematch on Aug. 31, but the 36-year-old suffered an injury to his right Achilles.

Majority decision. Thanks to all the fans who came out #TeamTruax pic.twitter.com/vqKXetCQjI

From the opening bell, Truax landed the more-effective punches, mostly connecting with one-two combinations to the head. Basajjamivule would throw a looping left or right to the head and immediately grab onto Truax.

Basajjamivule was deducted a point from referee Mark Thomas in round four for hitting Truax in the back of the head as both fighters clinched on the inside, prompting restlessness from the pro-Truax crowd in attendance. Truax, a graduate of the University of Minnesota, resides in the nearby suburb of Saint Michael.

The pace of the second half of the fight was significantly slower, with very few exchanges between the two. Basajjamivule did land occasionally, preventing Truax from landing anything of significance by smothering his punches or clinching.

Basajjamivule was again deducted a point for holding midway through round 10. Both let their hands go during the last minute until the bell sounded to end the round.


After the scorecards were read, Truax was disappointed with his performance.

“I fought like crap and I don’t know why,” said Truax, who lost the IBF title to James DeGale in a rematch in April of 2018. “Perhaps it was the ring rust. I had only fought two rounds last year. I honestly don’t feel like a winner tonight. I’m going to go back to the gym Monday and get sharper.”

Truax is scheduled to face Ernest Amazu (25-5, 22 KOs) of Ghana on Feb. 15 at the Bridgestone Arena in Nashville, Tennessee. The 10-round bout will take place on the undercard of the Caleb Plant-Vincent Feigenbutz world title fight.