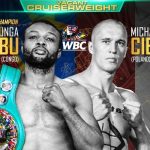 Cieslak, who is rated No. 9 by The Ring at 200 pounds, is excited to finally have his world title shot.

“I’ve been waiting for my chance for so long. This is the moment I’ve worked for since I started boxing,” Cieslak (19-0, 13 knockouts) told The Ring through Michał Koper. “The plan is very simple – I’ll go there and come back to Poland with the WBC belt.

“It’s hard to tell [what Makabu’s weaknesses are] because actually there’re no flaws in his boxing game. He’s a southpaw; he’s a big puncher, has some big wins on his record but I feel strong, I go there to win.”

Cieslak and Makabu will meet in the DRC, formerly known as Zaire, in the first world title bout since Muhammad Ali stunned the world by famously knowing out George Foreman in “The Rumble in the Jungle,” in October of 1974.

Cieslak, who is bidding to become the fifth male Polish world champion, is undeterred by travelling into the unknown.

“I don’t want to complain about things I’m not able to change,” he said. “I’m focused on what I have to do. The fight is in Congo, so I have to win it in Congo.

“Of course the environment will be different but I can’t make things any better by thinking about it or complaining. I just do my job. Actually I think they knew from the start that the fight would eventually happen on January 31 and they rescheduled it twice to get me distracted. But I stayed focused. I go there to grab the WBC belt.” The 30-year-old is battle-tested, having stopped Makabu’s compatriot Youri Kalenga (TKO 7) and rough Nigerian Olanrewaju Durodola (TKO 2) in his most recent outings.

However Cieslak admits the disrupted nature of the promotion hasn’t helped his preparation and feels there may have been some gamesmanship at work by the Africans.

“The camp wasn’t easy,” he explained. “Initially I was supposed to fight Nuri Seferi on December 20. I was in top shape for that date and prepared for that opponent.

“A few days before the Seferi fight, we were informed about the opportunity to fight Makabu on January 18, so we cancelled the Seferi fight and had to find a way to prepare for the new date and remain in shape.

“We also had to find southpaw sparring partners during Christmas/New Year period. Artur Szpilka, who moved down to cruiserweight, was first to offer me his help. My team did their job great and were prepared for January 18 but then the Makabu team changed the date to the 25th and then again for the 31st. But I’m not looking for any excuses here. Things happen but my goal remains the same – to beat Makabu and win the title.”

Wasilewski concurs with his fighter.

“Of course it’s not a comfortable situation for Michal,” explained Wasilewski, “but I believe it has affected both fighters the same. Things like this sometimes happen. Now it’s about who coped better with the change and who wants it more.”

Currently ranked No. 4 at 200 pounds by The Ring, Makabu was stopped in one round in his debut in 2008. Since then he’s built an impressive career fighting in eight different countries. The 32-year-old road warrior had his first world title attempt in May 2016. He went to Liverpool, England, and dropped Tony Bellew in the first round but was stopped in the third. He has rebounded with seven wins to take his record to 26-2 (with 24 KOs) and earn his second world title opportunity.