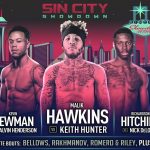 Malik Hawkins and Keith Hunter will square off in a clash of unbeaten junior welterweight prospects on February 28.

Hawkins (18-0, 11 knockouts), who resides in Baltimore, Maryland, has built up an unbeaten record fighting modest opposition. In his last bout, on December 28, he scored a fifth-round stoppage over prospect Darwin Price, who was unable to continue because of a knee injury.

The 24-year-old Hawkins claimed the best win of his career in March 2018 when he defeated former fringe contender Raymond Serrano by unanimous decision. He has only fought on a handful of telecasts but is now poised to headline his first major card.

“It feels great to headline my first ‘ShoBox’ event,” said Hawkins, who trains alongside lightweight titleholder Gervonta Davis. “This is something I wanted to do since I was a kid. A win in this fight and the exposure fighting on a platform like Showtime only brings more recognition to my talent and skills and bigger and better opportunities.”

“I can’t say much about my opponent. I know he’s also undefeated, he’s a durable opponent and he’s coming to fight. But if you watched my last fight, you know I come in to take my opponent’s ‘0.’”

Hunter (11-0, 7 KOs) will be fighting for the fourth time in his hometown of Las Vegas. The 27-year-old notched an impressive victory in his last bout on June 28, defeating gatekeeper Cameron Kreal by unanimous decision.

“I feel confident coming into this fight,” said Hunter. “My last two bouts, I defeated Mayweather (Promotions) fighters and I’m confident with the insight I have. We’re both 6-feet tall, but he’s missing components as a fighter. He has trouble fighting on the outside. He is more comfortable on the inside. I feel I’m the better (and a) more-skilled fighter going into the fight.”

Leonard Ellerbe believes the quality of the fighters on the card, particularly in the main event, makes this a must-watch event.

“Our first stop of the year is at our home venue for club shows and a stacked Friday night ‘ShoBox’ card,” said Ellerbe, CEO of Mayweather Promotions. “These prospects are looking to put on impressive performances to start their year off. They’re putting in the work to take their fight game to the next level.”

In the co-feature, New York City’s Richardson Hitchens (10-0, 5 KOs) will square off against Nick DeLomba (16-2, 5 KOs) of Cranston, Rhode Island in a 10-round junior welterweight bout.

In the opening bout of the telecast, super middleweight prospect Kevin Newman II will face Kalvin Henderson (12-0-1, 8 KOs) of Fayetteville, Arkansas in a 10-round bout. Newman (11-1-1, 6 KOs), who resides in Las Vegas, has won his last four bouts.