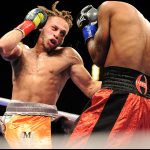 Best night of pro career and why: Williams is happiest with his most recent performance against Rickey Edwards because he was able to fight a different style.

“I fought more aggressive, coming forward, and took the fight to my opponent,” Williams told The Ring. “I was a lot more verbal in the ring, too. I normally don’t trash talk. And I also won my second title (the vacant WBC US junior welterweight title).”

Worst night of pro career and why: The 21-year-old feels he should have stopped Matt Doherty in July 2018.

“I dropped him twice but didn’t get him out of there.” he said.

Next fight: Williams looks to close out 2019 against Tre’Sean Wiggins in a bout scheduled for 10 rounds at the Generoso Pope Athletic Complex, Brooklyn, New York, on Thursday.

“I’m excited to fight in New York City and I’m going there to dominate,” he said confidently. “Wiggins is a tall southpaw but I’ve fought three or four southpaws.”

Wiggins (11-4-2, 6 KOs) turned professional in 2010. He made a good start winning his first two fights inside a round; however his career his been stunted by spells of inactivity. “Trigger” gave Mykal Fox a tough fight in dropping a majority decision in 2017. He also went eight rounds in a losing effort against Richardson Hitchins earlier this year.

The 29-year-old has rebounded to outpoint Samuel Teah and draw with Branden Pizzaro. Williams will start as the favorite but can expect a tough night’s work against the revitalized Wiggins.

Why he’s a prospect: Williams won five national titles but decided against trying to represent his country at the next Olympics for a few different reasons.

“I have a pro style,” he explained. “The amateurs weren’t a good fit for me.” Williams was also too young to qualify for the 2016 Olympics and would have had to wait years without any guarantees to try for the 2020 Olympics. “The time was right for me to transition to the pros.”

Williams feels his intellect is a key strength for him: “Being smart in the ring and able to adjust.”

His trainer Paul Cichon feels his fighter’s versatility will serve him well as he progresses.

“He’s smart and able to adapt in the ring,” said Cichon. “His hand speed and ring smarts serve him well. He can box and fight.”

Jackie Kallen, who has worked with several titlists, notably James Toney in the early-1990s, has seen a lot during her time in boxing and feels Williams could be her next champion. “I definitely see a world title in Mykquan’s future,” stated Kallen. “He has all the right skills and a ring presence that is undeniable. His innate talent plus his training discipline, mixed with his heart, is the perfect recipe for greatness.”

Why he’s a suspect: Williams is a well-rounded fighter but doesn’t appear to excel in any one particular area. He’s achieved a lot in fewer than 60 amateur bouts but didn’t fight internationally. It remains to be seen if he can successfully negotiate that step up in competition.

He either gets rid of an opponent inside the first round, as he has done with six of his seven foes, or they hang around and go the distance. He is still young and will learn but, at the moment, he isn’t working over the opposition and forcing stoppages in later rounds.

Williams realizes he must improve across the board on all aspects of his game.

“There is always something you can improve on no matter who you are,” he said, “I guess to defeat opponents who have more ring experience than me.”

Cichon agrees and feels his fighter is improving as he goes along.

“He just needs more experience, more fights,” said the trainer. “He gets better each fight. He wasn’t jabbing enough at one point but he’s taken care of that.”

Storylines: Williams was born in the tough East Hartford area of Connecticut. His father was murdered when he was eight days old and the family home burned down when he was only 10 years old.

However instead of succumbing to the ghetto, Williams went to school, stayed out of the hood and graduated.

“Growing up there, you can be easily influenced negatively if you’re a follower,” he explained. “It’s just a rough place. Not many take advantage of opportunities to be successful. Some run with it but they eventually fall to the streets. I’m mentally strong and won’t let people drag me down.”

Williams comes from a strong family who has helped keep him on the straight and narrow.

“People around me,” he added. “My mother, Aunt Addy (Irizarry), who first brought me to the gym, and coach Paul Cichon are the three main people.”

When he was seven years old, his aunt, a professional boxer who fought Cecilia Braekhus in 2008, took him to a boxing show. Shortly afterward Williams asked his mother if he could box. She took him to Cichon, who ran a gym in nearby Manchester. Things moved forward from there.

Naturally Williams has big goals for the future. “Like every boxer, to be world champion but I want to be unified world champ, win all the belts,” he said. “I want to be the best possible fighter I can be. I want to be financially able to take care of my family, especially my mother, who I want to buy a house for outside of where she lives in East Hartford.”

Williams is a full-time boxer who enjoys spending time with his family and friends as well as two pet dogs.