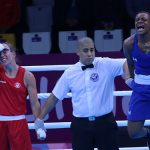 USA Boxing announced the 13 boxers who will compete in the 2020 Olympic boxing qualifiers, plus the 13 alternates, on Wednesday.

The boxers on the qualification team will have their first attempt at making it to the Tokyo Games at the Americas qualifying tournament, which takes place March 26 to April 3 in Buenos Aires, Argentina. The “last chance” world qualifier is set for May 13-24 in Paris.

The boxers and their training partners will return to Colorado Springs on Feb. 5 to begin their next training camp.

Unlike in past years, where the winner of the trials would automatically become the pick for the squad, USA Boxing used a two-step selection process, where the trials winner and runner-up would undergo evaluation at the Olympic Training Center in Colorado Springs, Colo., and then compete against international competition at the 2020 Strandja Tournament in Sofia, Bulgaria before a selection would be made.

Hicks was one of the boxers who was able to make the qualification team, despite going 1-2 in the trials against Martinez, who was named an alternate. Mireles, the super heavyweight alternate, had gone undefeated in winning the trials in Lake Charles, La., in December, but lost out to Torrez, who had beaten the runner-up Jeremiah Milton in a special box-off in Colorado Springs to decide who would go to the Strandja tournament. Mireles ended up losing his first bout in Bulgaria to Djamili Dine Aboudou of France by a 5-0 decision, while Torrez made it to day three before losing via walkover to Danis Latypov of Bahrain.

All three golds won at Strandja, and the two silvers, came from the women’s side, with Fuchs, Jones and Graham winning decisions on Jan. 25, while Medina and Cruz earned silvers. Herrera, the flyweight representative, won the men’s only medal of the tournament, a bronze.

Of the selections, Fuchs of Houston, Tex. is the only returning member from the 2016 squad. The flyweight representative went unbeaten through the trials, defeating alternate Christina Cruz twice, and then once again in the gold medal match at the Strandja Tournament to cement her spot. Fuchs won the 2016 trials as well, but failed to qualify for the Rio de Janeiro Games. She joins Claressa Shields as the only two American women to win consecutive Olympic trials.