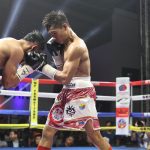 It’s a rare occurrence that a Filipino boxer gets to win a world title in his home country. With Pedro Taduran and Samuel Salva both hailing from the country, it seemed like a natural fit to put their vacant IBF strawweight title fight last September in the country’s capital region of Metro Manila.

That night, Taduran made good in his second shot at a world title, getting off the canvas in round to force the previously unbeaten Samuel Salva to retire on his stool after the fourth.

For his first defense, the 23-year-old from Libon in Albay province is hitting the road, as he defends his belt this Saturday against Daniel Valladares (22-1, 13 KOs) at the Jardin Cerveza Expo in Guadalupe, Mexico.

It won’t be the first time Taduran has fought abroad. In August of 2018, Taduran traveled to Thailand to face Wanheng Menayothin for the WBC 105-pound title. Taduran gave a spirited challenge, landing early with his southpaw power punches before the 50-fight veteran pulled away late to win a unanimous decision.

“He gave me a hard time because he is a more experienced fighter,” said Taduran, who is managed by Art Monis and trained by Tacy Macalos, a former IBF junior flyweight champ. “I gained experience from that fight.” The time difference from the Philippines to Thailand is just one hour; the difference to Guadalupe is 14 hours. While Taduran arrived in Thailand five days prior, he and the team traveled to Mexico seven days early to adjust.

Valladares is fighting for a world title at 105 pounds despite fighting almost exclusively as a junior flyweight and flyweight. He’s rated no. 1 by the IBF at 108 pounds, though that title is being held up by Felix Alvarado, who was scheduled to unify with WBA titleholder Hiroto Kyoguchi on New Year’s Eve before withdrawing due to illness.

Valladares has plenty of experience against Filipino southpaws, having outlasted Christian Araneta, as hard a puncher as there is at 108 pounds, and faded former titleholder Merlito Sabillo, beating both by stoppage in 2019.

“This fight will be a good fight because we have the same style of fighting that is always moving forward,” said Taduran, who joins Manny Pacquiao, John Riel Casimero and Jerwin Ancajas as the country’s current world titleholders.

“The match-up is very good, they have the same style, but I don’t know if Valladares can get the fighting weight,” added Monis, voicing doubt about whether the challenger can cut five pounds from his last bout, when he defeated Gabriel Ramirez by majority decision in November.

Taduran first began boxing at age 9 when his older brother Joseph taught him how to punch. He says he had 100 amateur fights, highlighted by a gold medal at the Bicol regional championships, before turning pro at age 18.

He’s one of ten children (five boys and five girls), born to a father who makes a living as a rice farmer and as a blacksmith who makes axes and bolo knives, and a mother who works with the barangay (neighborhood) police.

With the purse he earned from his world title win, Taduran renovated his parents’ home, fortifying it with concrete so it can stand up to typhoon winds.

He’ll be able to give back more to his family if he can retain his belt in Mexico.

“I want to win here now so I can help my parents and to prove to everyone that I deserve to be a world champion,” said Taduran.

“It is my dream to win again because I’ve always dreamt of this and always worked hard for this.”

The post After winning title at home, Filipino champ Pedro Taduran defends belt in Mexico appeared first on The Ring.