Ilunga Makabu ready to fulfill his destiny in Kinshasa homecoming against Michal Cieslak
mvpboxing |  February 02, 2020, 07:00 AM 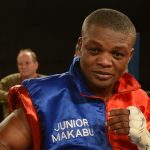 World championship boxing returns to the Democratic Republic of the Congo on Friday night when local hero, Ilunga “Junior” Makabu, takes on unbeaten Polish contender Michal Cieslak in Kinshasa with the vacant WBC cruiserweight title on the line. Kinshasa is, of course, the capital made famous by Muhammad Ali and George Foreman for their legendary “Rumble in the Jungle” back in 1974 when Ali defied the odds to regain his heavyweight title (the country was then known as Zaire).

It is of course impossible to top the iconic status of Ali-Foreman, but Makabu-Cieslak is a highly competitive, world-class matchup where anything can happen.

Makabu, who is based in South Africa and trained by Damien Durandt, is a native of the DRC and will be fighting in front of his home crowd for only the third time in his career. Kinshasa has been good to him in the past with stoppages of Glen Johnson and Taylor Mabika taking place in the capital.

Durandt is upbeat about the location. “They’ve taken very good care of us and I’m sure they have taken good care of the Cieslak team as well, so Kinshasa has actually been great. We are looking forward to having Junior fight in front of his people. I think we are going to have a large amount of people out there coming to support us, which is great. It is nice to finally have a world title fight where you fight at home.”

Makabu, who is rated No. 4 by The Ring at 200 pounds, has fought at the top level of the sport for a long time while compiling his 26-2 record. Since his defeat to Tony Bellew in his first crack at the title back in 2016, where he put Bellew on the floor in the first round only to get stopped himself in the third, he has won seven straight fights, all but one of them by knockout. In 2019 he beat both Dmitry Kudryashov and Aleksei Papin in their native Russia. He stopped Kudryashov in five rounds in a firefight and prevailed by majority decision over the undefeated Papin, hurting the Russian several times and sending him to the floor in the last round of another war. Those two crowd-pleasing encounters showed us everything that is good and bad about Makabu. The southpaw has the heart to battle through adversity and, as his 24 knockouts attest, he can punch. He is explosive and has good offensive variety, using his jab to set up straight lefts. As soon as he gets close, he throws slashing uppercuts and hooks with both hands that have a way of getting around and through the middle of an opponent’s guard. He is decent at cutting off the ring as well. Sooner or later he will force his opponent to stand and fight. He paces himself well and remains dangerous until the last round.

The downside is part of what makes him such a crowd-pleaser – he gets hit. He takes a few to land a few and he has been hurt. Both Kudryashov and Papin had him wobbly in spots during their fights. With the exception of the Bellew fight and his pro debut, he has always recovered well, but taking flush shots the way he does always presents a gamble.

Makabu is one win away from becoming only the second world titleholder from the Congo (Sumbu Kalambay held the Ring Magazine and WBA middleweight titles in the late 1980s) but it won’t be easy.

Michal Cieslak, rated No. 9 by The Ring, will be trying to follow in the footsteps of previous Polish cruiserweight world titleholders like Tomasz Adamek, Krzysztof Wlodarczyk and Krzysztof Glowacki. He is undefeated at 19-0 (13 knockouts) and had his breakout in 2019, making Youri Kalenga retire in his corner after seven rounds and stopping Olunrewaju Durodola in two. The only other recognizable name on his record is two-time world title challenger, Francisco Palacios, whom he stopped in four rounds back in 2016. Cieslak has fast feet and moves well around the ring. He tends to start slow and then crank up the volume as the rounds go by. He has more than decent power, especially with his quick left hook that he whips around his adversary’s guard. When he hurts his man, he goes for it, displaying good killer instinct. He mostly fights in the orthodox stance, but every so often switches southpaw, which makes him rather awkward. He hasn’t been to the dark places that Makabu has, but he can handle adversity, as shown against Kalenga who came at him hard for the first few rounds before fading.

The 30-year-old Cieslak is only two years younger than Makabu, but he has not been in the same kind of wars and can therefore be viewed as the fresher fighter. He will also have a height and reach advantage but Makabu, who is not a big cruiser, should know how to deal with that.

He uses his feet to move out of the way, but he can be hit and bullied to the ropes as Kalenga showed. He does not have great head movement, and although he was able to negate most of the clubbing shots of Kalenga, it remains to be seen how he will keep away from those sharp uppercuts and looping shots that Makabu throws. When he gets nailed, he tends to respond by fighting himself out of trouble, rather than holding on. That has worked so far but it could backfire if he stands in the pocket with Makabu.

I asked Durandt for his assessment of their opponent on Friday night. “Cieslak is a very good boxer,” said the trainer. “He has obviously earned his number two ranking in the WBC. He has got some good elements to him. I do believe he’s got some loopholes and I do think he has got some threatening aspects, so I expect a very good fight.”

Like all good matchups, this encounter poses many questions.

Can Cieslak take Makabu’s power where so few have been able to? Can he stun Makabu with his left hook and take him out of there the way Bellew did? Will all the wars that the Congolese road warrior has been through finally take their toll? Did Cieslak’s wins over Kalenga and Durodola, who have taken some defeats prior to facing the Polish contender, flatter him? Is he perhaps not as good as his hype? How will Cieslak, who has never fought outside his native Poland as a professional, handle fighting in front of a partisan crowd in Kinshasa?

All these questions will be answered on the night. The fight has a “must win” feel about it for the African, as a loss in front of his home crowd, after going through so much to get back in this position, will be absolutely heartbreaking.

Durandt, however, is brimming with confidence: “Makabu will win and he will win in style!”

The post Ilunga Makabu ready to fulfill his destiny in Kinshasa homecoming against Michal Cieslak appeared first on The Ring.