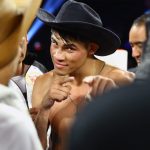 Emanuel Navarrete will defend his WBO junior featherweight title against Jeo Santisima of the Philippines on February 22, it was announced Thursday.

The 12-round bout will take place at the MGM Grand in Las Vegas and will be an undercard attraction on the Deontay Wilder-Tyson Fury pay-per-view telecast (9 p.m. ET/ 6 p.m. PT).

Navarrete, who resides in the Mexico City area, made a successful defense of his title on December 7, scoring a fourth-round knockout over Francisco Horta. That was the 25-year-old’s fourth successive victory in a seven-month span.

Currently rated No. 3 by The Ring at 122 pounds, Navarrete (30-1, 26 knockouts) now makes the fifth defense of his WBO title against Santisima, and he refuses to overlook the unheralded challenger.

“I am motivated to make my fifth defense in less than a year, and especially because I’m proud to be part of a historic card headlined by Wilder versus Fury 2,” said Navarrete, who is co-promoted by Top Rank and Zanfer Boxing. “This is a great opportunity to put on an exhibition for the fans and showcase my talent once again.”

Santisima (19-2, 16 KOs) last fought on December 14, scoring a third-round stoppage over Rene Dacquel. The 23-year-old has won his last 17 bouts after going 2-2 in his first four outings.

“I really appreciate this opportunity as this has been my dream since I was a kid,” said Santisima, who resides in the coastal city of Masbate. “For this fight, I will train and prepare to become the new champion. I don’t feel any pressure. I will just do my best on fight night to show the world who I am. I heard and read the news that this fight is a mismatch, but I will do my best to give a great night.”

In the main supporting bout, former heavyweight titleholder Charles Martin will square off against former challenger Gerald Washington in a world title eliminator.

Martin (27-2-1, 24 KOs) stopped Daniel Martz in his last bout on July 13. The 33-year-old, who lives and trains in the Los Angeles suburb of Carson, has won his last two bouts since losing a close unanimous decision to Adam Kownacki in September 2018.

“It is great to be back on the big stage,” said Martin, who is trained by Manny Robles. “February 22 will get me one step closer to my goal of becoming two-time heavyweight champion. Gerald Washington is standing in my way, so it’s my job to go right through him toward my ultimate goal.”

Washington (20-3-1, 13 KOs) also fought on July 13, knocking out fringe contender Robert Helenius in Round 8. In his previous fight, on January 26 of last year, the former football player at the University of Southern California (USC) was stopped in two by Kownacki.

The 37-year-old Washington challenged WBC titleholder Deontay Wilder in February 2017, losing by knockout in Round 5. That was his first setback as as a pro.