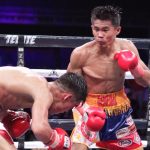 When the scorecards were read, Pedro Taduran felt both a sense of relief, and confusion. The 12-round scheduled bout, a mandatory defense of his recently-won IBF strawweight title against Daniel Valladares, ended at the end of the fourth on a technical decision due to a cut over the challenger’s right eye.

One scorecard read 39-37 in favor of Valladares, the hometown favorite from nearby Monterrey, Mexico, while the other two scored it even at 38-38, resulting in a majority draw. Taduran, who was visiting from the Philippines, felt he had gotten the better of the twelve minutes of boxing action. Had the bout been contested under WBC rules, where the uncut party in an accidental head clash is automatically deducted a point, he would have made the trans-Pacific flight without his belt.

“Why is it like that I almost lost?,” Taduran (14-2-1, 11 knockouts) asked rhetorically. He felt the scorecards should have read three rounds to one, but in his favor.

“I’m still happy because even though that’s what happened, the title is still ours and people say I really won that fight.”

Art Monis, who manages Taduran, initially thought they had won, not just on the scorecards, but by stoppage, saying that he believed the referee was stopping the fight because of the punches Taduran was able to land. The visitors began celebrating after the referee waved his arms over Valladares in his corner, and had to temper their emotions while awaiting the scorecards to be tabulated.

“Valladares [received] many punches and it was seen in his face,” said Monis. Taduran, 23, of Libon, Albay in the Philippines had the power edge, landing his straight left hand regularly, and rocking the iron-chinned Valladares (22-1-1, 13 KOs) on occasion. Valladares, no stranger to hard-hitting Filipinos after standing up to Christian Araneta last year, fired back each time, landing combinations of his own.

Both Sean Gibbons, president of MP Promotions, and Monis are in favor of a rematch to settle the unfinished business, but would prefer it if the second fight did not take place in Mexico.

The bout wasn’t Taduran’s first overseas. In August of 2018, he traveled to Thailand to face the WBC champion Wanheng Menayothin, but lost by unanimous decision. Taduran says the experience was similar, but urged the

Taduran, who is rated no. 8 at 105 pounds by The Ring, says he’d like a rematch with the no. 1 rated Menayothin, just not in Thailand, but wouldn’t commit to saying he’d win the second time.

“I cannot say yet, but I will give my everything in the fight to win,” said Taduran.

What he will commit to is some rest and relaxation when he arrives back in the Philippines.

“Me and my family are still happy, even though that’s what happened in the fight and I’m safe,” said Taduran. “We will still celebrate when I come home.”

The team will fly to Mexico City on Sunday, then to Narita airport in Japan, before catching the connecting flight to Manila.

The post Pedro Taduran feels he beat Daniel Valladares, but happy to retain title belt appeared first on The Ring.