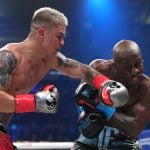 Both Tevin Farmer and challenger Joseph Diaz Jr., had to fight through adversity tonight, but it was Diaz who walked away with the victory, beating Farmer by unanimous decision to claim the IBF junior lightweight title.

“As long as you believe in yourself, you can overcome everything that you’ve been through,” Diaz, a 2012 U.S. Olympian, said with tears in his eyes. “I just want to say that Tevin Farmer is a hell of a fighter. I respect him and I thank him for this opportunity.”

Farmer, who had been one of the most active titleholders in boxing over the last year and a half, drops to 30-5-1 (6 KOs). “Diaz put up a hell of a fight,” he said. “I hurt my hand in the first round, I couldn’t use my jab the way I wanted to, and he took advantage of that.” Joseph Diaz fought with a gruesome gash above his left eye. Photo / @MatchroomBoxing

This battle of southpaws started off rough for both fighters. After the end of the first round, Farmer shook his right hand as if he had injured it. A clash of heads opened up a deep cut on his left eyelid in the second. Blood began dripping into the eye, visibly bothering Diaz. Farmer targeted the injury, touching it over and over with his accurate right jab.

Other than blood occasionally dripping into his eye, Diaz appeared unfazed by the cut. He applied pressure and walked Farmer back, throwing and landing the heavier blows. Cutman Ben Lira did a great job with the cut; the bleeding seemed to be under control by the fifth round.

Diaz, who came up short in a featherweight title challenge against Gary Russel Jr in 2018, found a home for his straight left hand and had Farmer backing up.

Trainer Chino Rivas urged Farmer to pick up the pace in the second half of the bout. The Philadelphia native, who was making the fifth defense of a title he won two years ago against Billy Dib, heeded his corner’s advice and had a much better seventh round. There were heavy exchanges over the next few rounds. Although Farmer stood his ground, Diaz appeared to get the better of it.

Farmer, who normally fights a defensive style on the outside, fought much of this bout at close range, which played right to the strengths of Diaz. The championship rounds were controlled by Diaz, landing hard body shots mixed in with solid work upstairs. Farmer looked sluggish and fatigued down the stretch, as if his legs were not quite under him. He began blinking in the early rounds and continued through the final bell.

There is a rematch clause in the contract which Farmer said he expects to exercise as soon as possible. However, with the nasty gash on Diaz’s eye, the injury to Farmer’s right hand, and a possible eye injury to boot, it could be a while before they return to the ring.

Promoter Lou DiBella expressed concern about Farmer repeatedly blinking his eyes throughout the fight and said he would be taking him to the hospital immediately to get checked out.

The bout was part of a Matchroom Boxing card that was broadcast on sports streaming service DAZN live from the Meridian at Island Gardens in Miami, Florida.