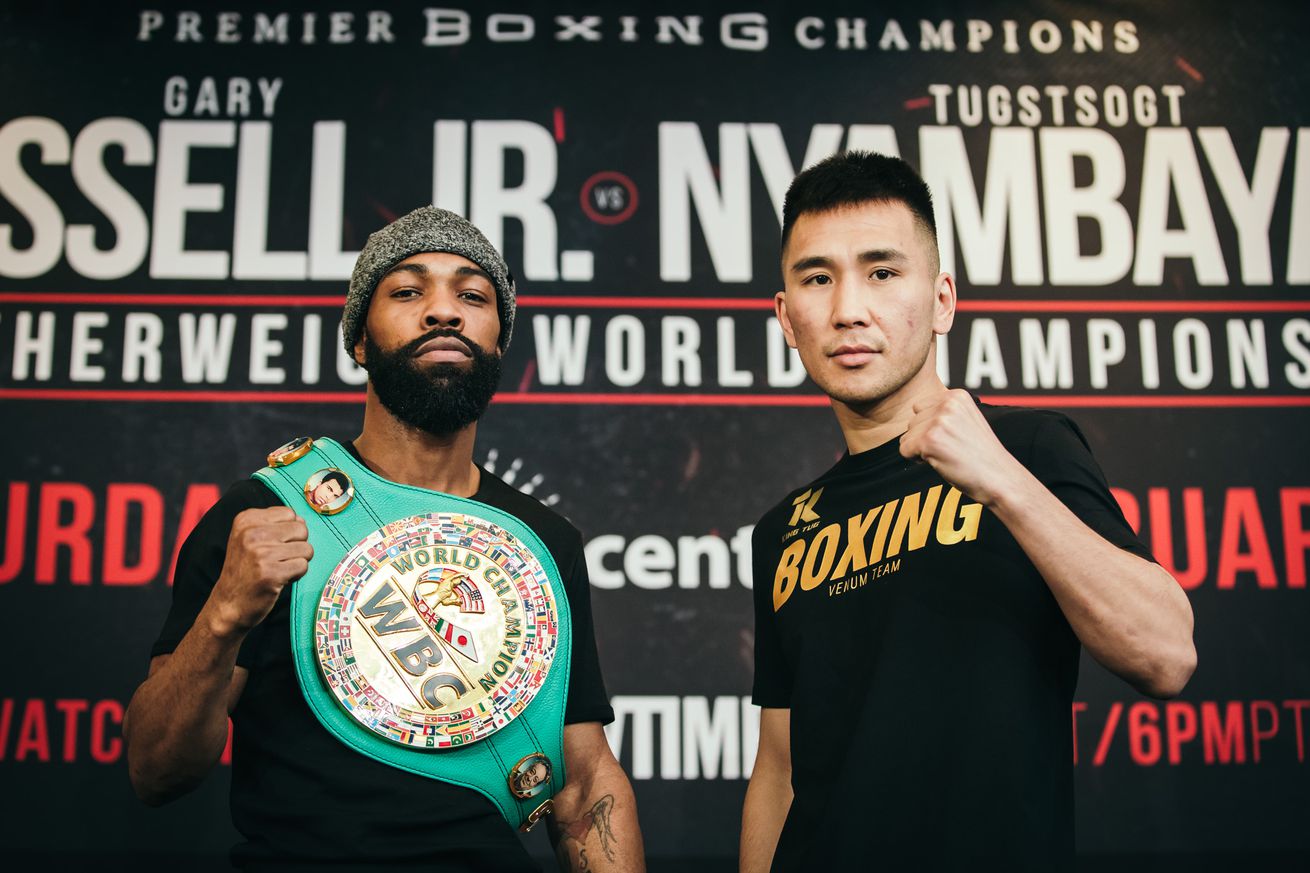 Gary Russell Jr takes on an opponent who looks tough, and Guillermo Rigondeaux returns in the co-feature on Showtime.

This Saturday night on Showtime (9 pm ET), Gary Russell Jr returns for a WBC featherweight title defense against Tugstsogt Nyambayar, and Guillermo Rigondeaux moves down to bantamweight to take on Liborio Solis for a secondary WBA title.

Rigondeaux is past his prime, but that might be fun for the rest of us. That fight last year with Julio Ceja was the first certified hoot of Rigo’s career, a phone booth war where Rigo got hit plenty but was able to do the bigger damage and stop Ceja, who is a tough dude.

Solis is also a tough dude, and he’s fought at a high level, winning a 115-pound title in 2013 and challenging for bantamweight belts on two occasions. If Rigondeaux makes 118 without any serious trouble, though, he should win. Rigondeaux has beaten plenty of guys at this level and still seems to have the ability to do so, even if it comes a little tougher than it would have years back. My suspicion is Rigondeaux’s legs are just not there anymore, not enough to move like he used to, and that we get another entertaining fight here. If I’m wrong and he reverts to type, he’ll cruise to a decision. If I’m right, it should be fun, and I think he stops Solis late on attrition, Gladiator Guillermo style. Rigondeaux TKO-10

I’m still having a hard time of letting go of that weak sauce quit job Rigo turned in against Lomachenko after spending all that time talking himself into that fight. I really think that fight was a psychological fracturing of the Cuban’s self-image. Rigo has since come back quietly to take two wins last year, and will now be dropping down in weight for this bantamweight contest. And while I’d normally be concerned about a fighter of Rigo’s age, 39, dropping down in weight at this point, his opponent Solis is 37 years old himself, so it’s not exactly as if Rigo is facing some young thundercat.

Solis will be fighting in the U.S. for the first time in this outing and has faced a wide array of competition but has come up short against the likes of Jamie McDonnell and Shinsuke Yamanaka. If he couldn’t beat those fighters, who are certainly good but never on the level of Rigo, I don’t see how he’ll be able to cope with the technical aspects of Rigo’s game. I’ll take Rigo to roll in a decision. Rigondeaux UD-12

This is less a fight between Rigondeaux and Solis as it is a fight between Rigondeaux and time. If “El Chacal” is anywhere close to his best, he’ll smoke Solis; the Venezuelan is tough and relentless, but that’s nothing Rigo hasn’t seen before. Solis isn’t much of a puncher, either, so I have a hard time picturing him taking out a guy whom several larger and heavier-handed fighters have dented but never knocked out.

I’m fully aware that this isn’t Rigo at his best, but even the Rigo that threw down with Julio Ceja should get the win. He’s far better defensively and packs enough power to hold his own in the exchanges Solis wants. Expect another entertaining scrap from Rigondeaux, who lands the more telling blows and slips enough of the return fire to get the win. Rigondeaux UD-12

Down at 118 pounds, Rigo should be happier sitting down on his punches adopting his newly found “War Rigo” persona. It was entertaining, yet kind of bizarre seeing “El Chacal” brawl it out with Ceja back in June – sitting in the pocket trading bombs with the Mexican proved fruitful on this occasion, but Rigondeaux is smart enough to know that this gameplan won’t always be a success. Solis is a well-versed veteran around bantamweight, and like Rigondeaux is battling through his late 30s.

For a version of the WBA title at bantamweight, Rigondeaux may well revert to type and get this result over the line. A comfortable win for the Cuban will put him in the conversation for bigger opportunities at 118 pounds without needing to push too hard against a guy who hasn’t been stopped previously. Solis hasn’t had a meaningful fight since 2017 and Saturday night will be as comfortable for Rigondeaux as he wishes to make it. Rigondeaux UD-12

Boy, I really like ol’ “King Tug,” and I think he’s got a shot here, but a few things need to happen for him to get the upset:

I think these things are all possible, but my gut is telling me they won’t all go right for Tug, and that Russell escapes with his belt in a competitive fight but not one with a ton of controversy, maybe a solid 7-5 or 8-4 sort of decision. Nyambayar did have a little trouble with Claudio Marrero, but that’s a weird one to compare, as Marrero doesn’t fight anything like Russell, but at the same time Russell is just better than Marrero. I still think talent-wise Russell might be the best featherweight in the sport by a fair bit, and even if Nyambayar is every bit as good as hoped, he just might not be the right guy to beat Russell. Russell UD-12

I guess it’s time for Gary Russell’s annual fight. The featherweight titleholder has only made one appearance a year for the past five years, and I expect this year to be no different. It’s a shame really, because there are some really good fights that we should be seeing Russell in, but in all honesty he seems plenty comfortable with how things have been going which will always probably leave the ‘what if’ factor for me. There’s still little doubt that Russell is a very good fighter though, obviously more talented than most of his peers.

So considering the light schedule Russell has been keeping combined with his level of talent, he should be extremely fresh for this fight. Nyambayar will sports some obvious physical advantages over Russell with his height and reach, and while that might give Russell some early trouble, I don’t think Nyambayar will have enough craft to deal with the slick style of Russell. Nyambayar is a tough, so I expect him to make it through the final bell, but I’ve got Russell taking a win over the distance. Russell UD-12

Next to Shakur Stevenson and the other champions. Nyambayar has as good a shot as anyone to dethrone Russell. He’s well-schooled, packs some power, has experience against southpaws, and knows how to rip the body. I can’t say “King Tug’s” performance against Claudio Marrero was enough to sway me, though; Russell can’t thump the way Marrero can, but he’s a fair bit faster and crisper. Plus, he actually knows how to jab properly, which is more than I can say for Marrero and his 3.48% connect rate.

I just don’t see Nyambayar being overwhelming enough on the rare occasions that he does get past the jab. Russell’s not an easy man to hurt and his own high-speed flurries figure to put a damper on Nyambayar’s enthusiasm to throw down in the pocket. Nyambayar probably wins a few rounds, but Russell walks away with the win. Russell UD-12

So, GRJ has come out this week claiming he is looking to fight THREE times this year – two more than he’s managed each year since 2014. His frustrations have grown at a “lack of opportunity” under Al Haymon, settling for year-upon-year of mandatory defences, with “King Tug” next in line. Russell Jr. is the longest-reigning WBC champion and has been sat far too comfortably on his featherweight crown without really underlining his credentials – I’m well prepared to fall flat on my face, but to me, the puzzle pieces are aligning for an upset this weekend.

We know what we are to expect from GRJ with his lightning hand speed, southpaw skulduggery and relative power – using precise counters, Russell Jr. is able to throw fire with fire usually landing first. Nyambayar isn’t your classic East Asian brawler. The 9-0 Mongolian is a technician who has added strings to his accomplished bow in recent weeks under the tutelage of Ismael Salas. The game plan is to beat Russell to the punch, use more fluid attacks and capitalise on the counters – “King Tug” looked adept in neutralising the southpaw stance against Marrero in his last victory and has had 12 months to tweak any deficiencies.

I’ve talked myself into this upset and I’m too far down the rabbit hole to retreat. I’ve always had a soft spot for fighters that I have trouble spelling, and Tugstsogt Nyambayar is no different. Tug of War! Nyambayar TKO-9