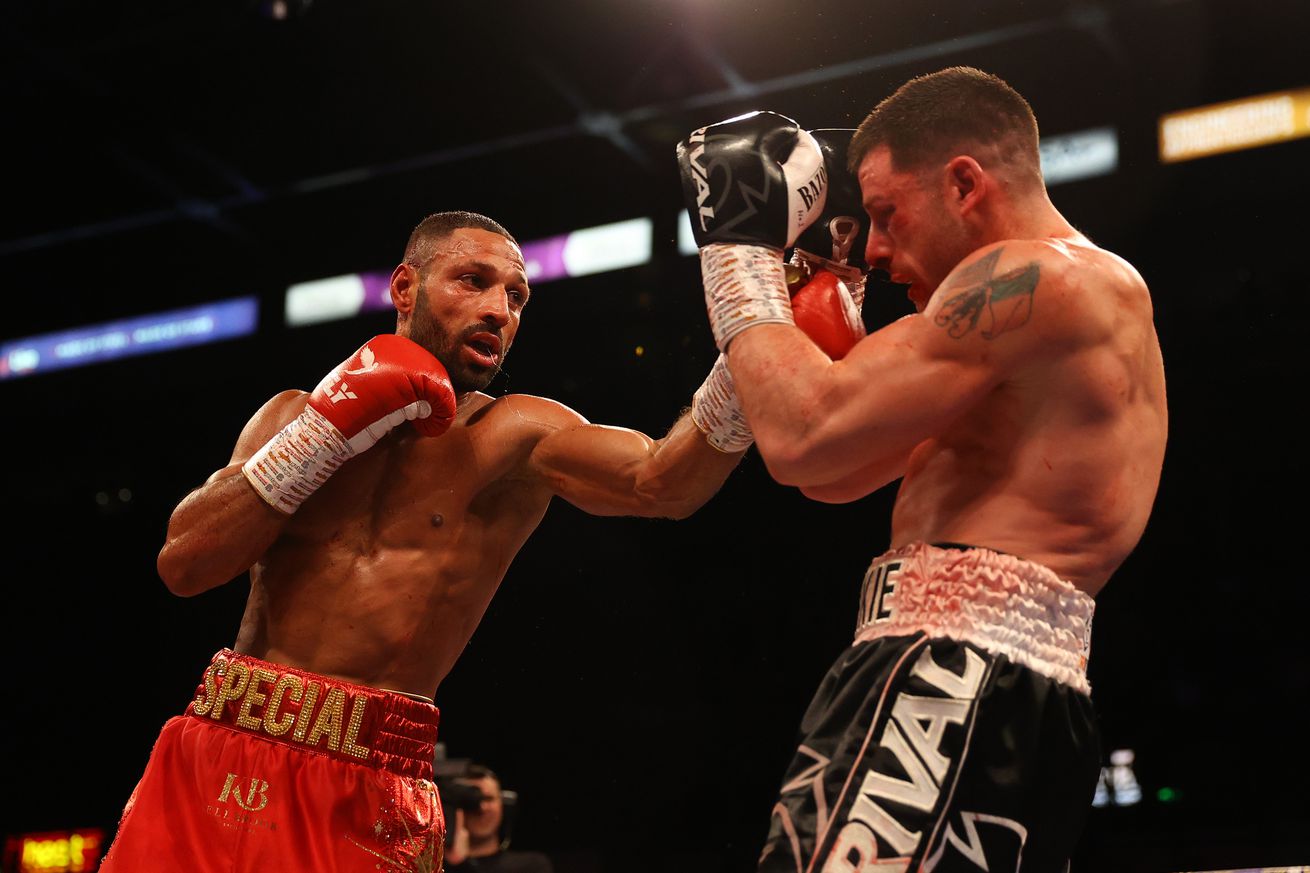 The former welterweight titleholder returned from a long layoff with a win, and now looks toward bigger fights.

Kell Brook returned from a 14-month absence today in his hometown of Sheffield, England, scoring a seventh round knockout over American club fighter Mark DeLuca in a tune-up return.

Brook (39-2, 27 KO) had last been seen in Dec. 2018, winning a clear but not exactly impressive decision over Michael Zerafa at the same venue. After failing to find a big fight in 2019, Brook, at 33, knew he had to come back against someone, and it wound up being DeLuca, a 31-year-old southpaw from Massachusetts, and an opponent nobody expected to provide much of a test.

In all honesty, DeLuca (24-2, 13 KO) didn’t provide much of a test, but he unquestionably gave his best effort while overmatched. As Brook felt things out for the first couple of rounds, there wasn’t much between the two, but DeLuca seemed to get his nose broken in the third, and was also dropped hard.

The Marine didn’t lay back or roll over, though, coming off the canvas throwing meaningful shots at Brook. But the class and levels had shown by then, and Brook was able to dictate the rest of the fight. He put DeLuca down very hard again in the seventh, and while DeLuca again got to his feet at about the count of nine, referee Phil Edwards reached the count of 10 officially, and stopping the fight there either way was probably the right call. DeLuca showed how tough he was, but he was out of his depth.

“The first few rounds were a little bit rusty,” Brook admitted. “‘The Bazooka’ was very tough and durable, he was a very smart fighter. I had to chip away for a clinical finish. I think you’re always questioning yourself, but I believe in what I’ve been doing in the gym.”

Brook may now be lined up to face fellow Brit veteran Liam Smith (29-2-1, 16 KO), the 31-year-old from the Liverpool fighting family, a former titleholder at 154 pounds. Smith spoke mid-fight to give his thoughts on what was going on, and confirmed that’s the fight he wants. After it was over, Brook didn’t commit to anything, but the interest is obviously there all around.

“I don’t shy away from any fighter,” he said. “I’ve got a lot of respect for him. I’ve sparred him. I’ve boxed Golovkin and he’s boxed Canelo. We’ve had very good spars; if those are anything to go by, the fight would be amazing. We’ll sit down and discuss it.”

Brook said he felt comfortable fighting at 154; he’d fought at 150 for the Zerafa bout, in an ill-fated attempt to work his way back to 147 and fight Amir Khan, which never happened. He now seems to have written off any possible return to the welterweight division.

“He’s got the mind, the brain, and the engine,” promoter Eddie Hearn said. “It’s not too late for Kell Brook. I believe he can become a two-weight champion.”

Hearn said that a possible Brook-Smith fight would be a WBO eliminator. The WBO junior middleweight title is currently held by Patrick Teixeira, who will defend against current mandatory challenger Brian Castano.