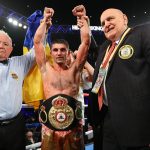 WBA flyweight titleholder Artem Dalakian made another successful defense of his title on Saturday night, defeating Josber Perez by 12-round unanimous decision at the Parkovy Convention Center in Kiev, Ukraine. Scores were 117-111, 117-111 and 118-110 for Dalakian, who improves to 20-0 (14 knockouts).

Perez did find pockets of success during the first half of the fight, but Dalakian countered efectively with two and three-punch combinations to head and body. The 25-year-old Perez was never hurt and Dalakian was content to box on the outside until the final bell sounded.

The victory over Perez was Dalakian’s fourth successful defense of the WBA title he won in February 2018 and snapped a string of three consecutive knockout victories.

The 32-year-old Dalakian, who is originally from Azerbaijan and now resides in Dnipro, Ukraine, is currently rated No. 3 by The Ring at 112 pounds.

The card was promoted by Union Boxing Promotion.