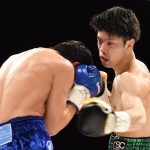 Tanaka, who is rated No. 1 by The Ring at 112 pounds, has held the title since outpointing Sho Kimura in September 2018 and made three successful defences against Ryoichi Taguchi, Jonathan Gonzalez and Wulan Tuolehazi.

The 24-year-old is a three-weight world titleholder, having held the WBO belt at strawweight, junior flyweight and flyweight.

Rumors abound that Tanaka struggles to make flyweight. This decision suggests that he’ll attempt to claim a fourth title at junior bantamweight, perhaps at the expense of countryman and WBO titleholder Kazuto Ioka.

Ioka and Tanaka shared the same card on New Year’s Eve in Tokyo and have long been on a collision course. However, when Tanaka has moved up in weight previously, he has taken time to settle into the division. That looks likely again as both men gear up for an all-Japanese superfight later in 2020.

The top two positions to fill the WBO 112-pound title vacancy are occupied by No. 1 Giemel Magramo and No. 2 Angel Acosta.