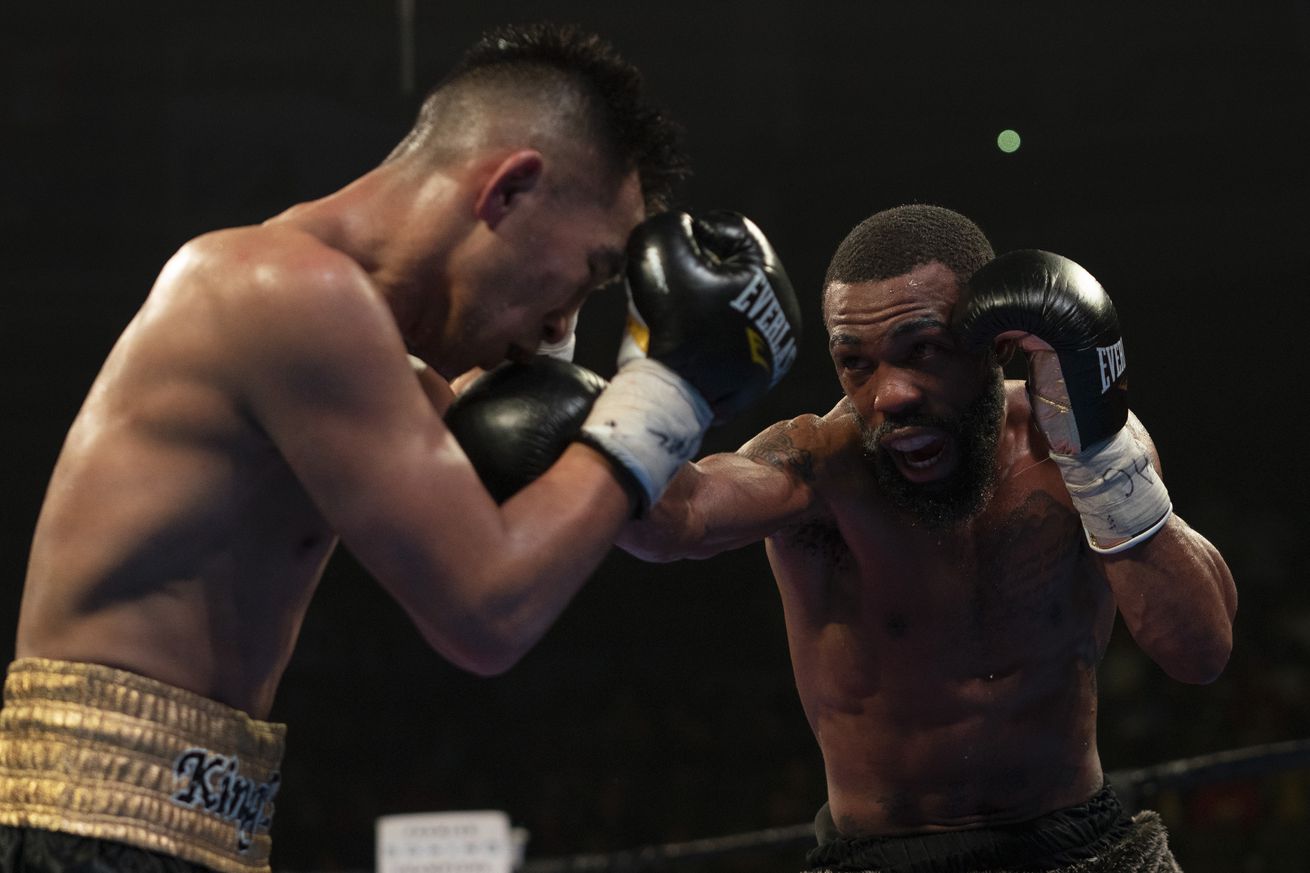 It wasn’t exactly a stacked weekend, but one that posed enough questions going forward.

Much has been made of the talents that Gary Russell Jr, Guillermo Rigondeaux and Kell Brook possess inside the ring. Still, with inactivity plaguing their recent pursuits of greatness, more questions have been posed rather than answers resolved.

All three competed this weekend; all three won this weekend, but what path will each follow as the allure of further honours becomes a risky roll of the dice?

Nyambayar’s tugging on my heartstrings; Russell’s on the hustle

I’ll hold my hands up: I thought “King Tug” would have enough this past weekend.

It’s not that I don’t rate Gary Russell Jr or believe him to be unworthy of the green and gold belt at 126 pounds. I just saw strengths in Nyambayar’s artillery that could solve the smart, elusive puzzle and rapid counter-fire that has become GRJ’s raison d ‘être as champion.

”King Tug” was able to telegraph a lot of smoke that was coming his way, but a reluctance to throw with the champion early in the fight left him chasing the rounds in the second half of the fight, unable to ultimately capitalise on Russell when he took his foot off the accelerator.

Russell found success early with the jab where Nyambayar’s focus on landing a big right hand would stifle his chances of nicking any of the first four or five rounds. Russell hustled his way to a huge lead in the first half of the fight, with Ismael Salas visibly perturbed by the challenger’s lack of efficient output.

“I think I fought a little lazy,” Nyambayar told Fight Hype after the fight. “I just waited for him. I think that affected the fight.” “Lazy” feels a little self-deprecating from the challenger.

David Bilocerkowec’s card of 118-110 (my card read 115-113) was the only one I had a real problem with on announcement that Russell had succeeded in the fifth defence of his WBC crown. There were pockets of rounds towards the back end of the bout where the pair would tee off on each other at will, with Nyambayar capitalising on Russell’s apparent fatigue. Unfortunately for the Mongolian, it was a case of too little too late – granted, some rounds were hard to score, but “King Tug” rallied well enough to be awarded more than two rounds of the twelve contested inside the PPL Center.

“I want Lomachenko again,” Russell said after the fight. “That’s not for the fans, that’s something for me.”

Avenging the solitary loss on GRJ’s resume appears top priority, but staying at featherweight would throw up some intriguing battles if Russell’s hunger burns deep enough.

“Realistically, I think we can get Leo Santa Cruz next. If not, we’ll jump two weight classes, forget 130; we’ll go straight to 135,” Russell confirmed.

If Al Haymon gives the green light, LSC is a fight that would tick a lot of boxes. The other belt-holders at 126 – Warrington and Stevenson – seem to be on each other’s radars, so with a bit of luck and a gullible trust that GRJ wants to fight again in 2020, the feathers could find a rightful ruler as they argue amongst themselves.

Most importantly, to me, Tugstsogt Nyambayar has announced himself as a real player in the division. The Mongolian may rue wasted opportunities early in the fight, but with experience will come further opportunities to stamp his mark on the division.

What’s that coming over the hill, is it a “Monster”?

It turns out “War Rigo” was just a flash in the pan. In outpointing Liborio Solis for the secondary WBA bantamweight strap, Rigondeaux reverted to type in a reasonably dull victory over 36 forgettable minutes in Allentown.

You can’t really blame him. Close to turning 40, with over 400 fights to his name, Rigondeaux’s legs have slowed down considerably, meaning that explosive, entertaining action comes in patches rather than rounds.

The Cuban veteran was understandably reluctant to take risks against the Venezuelan; with a version of the WBA 118-pound world title, Rigo is now looking to the future, with bigger challenges waiting around the corner.

“Before, I was fighting guys bigger than me. Now I’m in my weight, let’s go ‘Monster’ hunting,” Rigondeaux said after his victory. Naoya Inoue holds the full WBA title at 118 pounds, with Rigondeaux looking to challenge the Japanese star before Father Time ticks too loudly to ignore.

I was there inside Madison Square Garden when “El Chacal” quit on his stool against Lomachenko in late 2017. Up at 130 pounds, it was always going to be a huge ask for the Cuban to implement a game plan capable of derailing a pound-for-pound star with Lomachenko’s pedigree after a jump of two weight classes. Leaving the Garden that evening, I wasn’t certain Rigo would be seen inside a ring again.

Rigondeaux is well past his prime and Inoue is entering his now; Inoue is a natural 115-pounder (he turned pro at 108) with Rigodeaux campaigning in and around 122 since turning over.

I can’t say it’s a fight that has penetrated my consciousness much before Saturday night, but the timing feels right for these two to dance. Rigo’s power can often be overlooked, and with reduced movement affecting his defensive capabilities, you can construct arguments for both men.

Hyperbole aside, a) Inoue would still be a huge favourite going into this fight and b) Bob won’t let this fight happen.

Brook bazookas that DeLuca looking comfortable as a 154-pounder

After 14 months out of action, Kell Brook returned to the ring in front of a home crowd in Sheffield, blasting the overmatched Mark DeLuca out in seven rounds.

Campaigning as a junior middleweight, the 33-year-old looked healthy at the weight. Throwing spiteful, fluid, classy combinations from a composed, well-balanced stance, Brook looked as good as he was expected to against the teak-tough former U.S. Marine.

I’ve been to half a dozen Kell Brook fight nights and “Special K” still holds a place in the hearts of many British fight fans. After suffering crushing defeats at the hands of Gennady Golovkin and Errol Spence Jr – between a space of eight months and 13 pounds – Brook has struggled to land the comeback fights worthy of a narrative towards another world title charge.

A win against Sergey Rabchenko was followed by a less than convincing decision over Michael Zerafa, leading to a lengthy layoff before his return on Saturday against DeLuca.

The most promising angle to take from Brook’s last performance is that he’s not shot. He looks happy and healthy at 154 pounds, with flashes of the former welterweight champion being visible in patches against the American challenger. As he grew into the rounds, his timing improved, with the power following in close quarters.

With the junior middleweight division currently up in the air, the state of play is perfect for a fighter like Brook – backed by Matchroom – to fast-track towards a world title shot. Talks of a domestic clash against Liam Smith sound promising, but with Hearn promoting both guys, he’ll look to grab a world title for one of them before pitting them head-to-head.

Smith is ranked No. 2 with the WBO and will be keeping a close eye on the winner of the Brazil–Argentina grudge match between Teixeira and Castano this spring.

A year ago Brook looked like he had fallen out of love with the sport, ready to cash-out in chasing the Amir Khan fight for the last time. Now, in a division where he can still be a player, “Special K” may be on the verge of an Indian Summer.