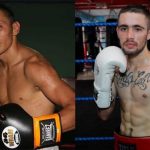 News reached The Ring that Felix Alvarado will defend his IBF junior flyweight title against DeeJay Kriel at the Fantasy Springs Casino in Indio, California on April 25.

Alvarado, who is rated No. 4 by The Ring at 108 pounds, has long been the bogeyman of the junior flyweight division. After losing two world title attempts earlier in his career, “El Gemelo” rebounded to win the IBF belt, scoring a seventh-round stoppage over Randy Petalcorin in October 2018. In his first defense, in May of last year, Alvarado (35-2, 30 KOs) outpointed Reiya Konisha.

The fearsome Nicaraguan had been scheduled to face WBC counterpart Kenshiro Teraji in Japan’s traditional New Year’s show but had to pull out due to a bronchial issue.

Kriel (16-1-1, 8 KOs) won the IBF strawweight title in February 2019 with a come-from-behind 12th-round knockout over Carlos Licona. Due to struggles making 105 pounds, Kriel decided to vacate and step up in weight. The 24-year-old South African is based in Las Vegas where he works alongside well-regarded trainer Kenny Adams.

The post Felix Alvarado-DeeJay Kriel set for April 25 in Indio, IBF 108-pound title at stake appeared first on The Ring.