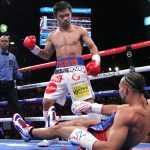 The news was announced Tuesday in a press release, which states that, in addition to Paradigm head Audie Attar, Pacquiao’s career will also be handled by business manager Arnold Vegafria, plus legal counsel Brando Viernesto and Ping Nepomuceno, who is described as a Pacquiao “associate.”

The 41-year-old Pacquiao (62-7-2, 39 knockouts) currently holds the WBA welterweight title, which he won in a split decision thriller last July against the previously unbeaten Keith Thurman. Pacquiao, who is also a sitting senator in the Philippines, had been linked to rumors of a fight against McGregor, a former featherweight and lightweight champion in the Ultimate Fighting Championship.

McGregor is currently 0-1 as a pro, but that fight in 2017 against Floyd Mayweather Jr. was a major blockbuster success, selling a reported 4.3 million pay-per-view buys, which is only second all-time to Pacquiao’s 2015 fight with Mayweather.

With Mayweather retired, and the current crop of welterweights still working its way up in terms of popularity, McGregor could possibly be the biggest fight available from a financial standpoint.

McGregor acknowledged Pacquiao’s new deal, tweeting out “Welcome to the team Emmanuel.” Pacquiao’s account has yet to make mention of the new deal, but was quoted in the release.

“I am proud to partner with Paradigm Sports Management and am excited for the opportunities that Audie Attar and PSM have to offer,” says Pacquiao. “One thing I want everyone to remember is to always think positively. Never think negatively; that is the beginning of your downfall. Everything is possible”.

Sean Gibbons, president of MP Promotions, directed this writer to a previous quote stating that Pacquiao is still with Premier Boxing Champions, which he has fought for since his win last January against Adrien Broner.