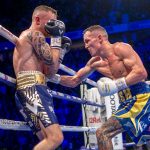 Earlier today it was announced that IBF featherweight titleholder Josh Warrington had parted ways with Frank Warren and Queensberry Promotions.

Perhaps predictably, that news has now been followed by the revelation that Warrington has signed with rival company Matchroom Boxing.

Warrington, who is rated No. 1 by The Ring at 126 pounds, signed a multi-fight promotional deal with Matchroom and will reveal more details at a press conference tomorrow.

The 29-year-old outpointed Lee Selby to claim the title in May 2018 before outpointing Carl Frampton and Kid Galahad in consecutive defenses. In his most recent outing, in October, Warrington scored a routine second-round stoppage of Sofiane Takoucht.

Since then the proud Yorkshireman has openly talked about facing WBO counterpart Shakur Stevenson. Thus far, however, no deal has been consummated and this promotional switch undoubtedly changes the landscape.

“It’s great to be back with Matchroom, Sky and now DAZN and I’m very excited about the future,” Warrington (30-0, 7 knockouts) said. “I have enjoyed my time at BT, but now I’m looking forward to going on to achieve my dreams of both fighting in the USA and unifying the division.”

Promoter Eddie Hearn was understandably excited about the coup.

“I’m ecstatic to welcome Josh Warrington back to Matchroom,” said Hearn. “We had some crazy times helping to build Josh in Leeds and now we re-unite at a time when he is king of the division.

“Josh has some of the most loyal and passionate supporters in sport and we look forward to delivering nights they will never forget. There is so much more for Josh to accomplish and today starts a new chapter in the thrilling Josh Warrington story.”

Quotes courtesy of a press release issued by Matchroom Boxing.

The post Josh Warrington signs with Matchroom Boxing, seeks unification bouts and US debut appeared first on The Ring.