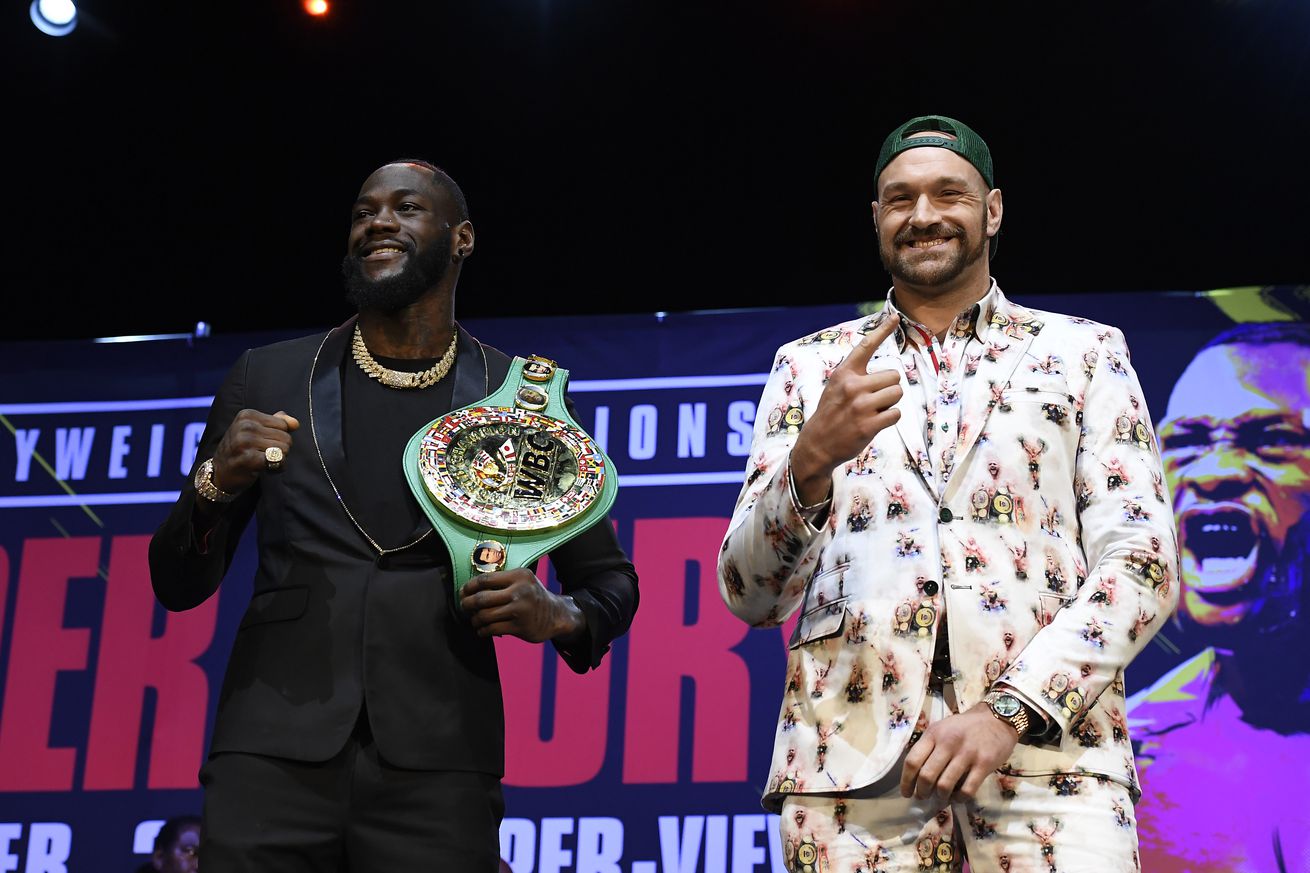 Where will this humongous heavyweight rematch be won and lost?

The countdown is nearly over for one of the marquee fights of 2020. “The Bronze Bomber” and “Gypsy King” go toe-to-toe on February 22 in an attempt to occupy the heavyweight throne.

Deontay Wilder (42-0-1) and Tyson Fury (29-0-1) duked their way to a contested split draw in late 2018, leaving myriad questions looming large over the state of the heavyweight division and their positioning at the top of the ladder.

Four hundred forty-eight days later, and we do it all again.

What has changed in the time that has passed, and who can make the necessary adjustments to reign victorious in Las Vegas?

Here are five questions to be answered inside the MGM Grand:

Can Fury continue to control the distance?

Fury’s control of the distance negated the danger of Wilder’s devastating right hand throughout a majority of the contest. With fidgety feints, upper body movement and the occupancy of Wilder’s right hand, Fury was able to stay out of trouble for all but a couple of exchanges in the fight.

High, frequent jabs to the right guard of the WBC champion disabled Wilder’s right hand. Ben Davison – Fury’s trainer for the opener – has alluded to the attention they placed on keeping Wilder’s right hand close to his right cheek, moving it away from his midriff where he can create the maximum power when it’s cocked and locked.

Wilder respects Fury’s speed and much-maligned power, with a reluctance to leave an open guard on the assumption that he will be able to land first.

This tactic is also highly dependant on Fury’s continued ability to step in and out of range freely, without being pinned down by the champion or forced to retreat to the ropes. The “Gypsy King” is adept at lateral movement, capable of circling the ring for the scheduled 36 minutes – the onus is on Wilder to make the necessary adjustments in cutting off the ring.

Much has been made of Fury’s desire to add weight during this camp, with new trainer “Sugar Hill” Steward attempting to increase the one-punch power of the 31-year-old. An increase in mass may well reduce Fury’s mobility over the championship distance – certainly, if he plans to box off the back foot in the opening rounds – with the “lineal” champion potentially forced to sit in the pocket more during the rematch to negate and smother the right hand of Wilder.

At a distance, or up close, Fury simply needs to avoid sitting in Wilder’s “sweet spot” of range where he can unleash a fight-altering bomb.

Will Wilder’s jab improve, opening the door to the right hand?

With an over-reliance on landing the desired right hand, Wilder needs to be thoughtful in his use of the jab to open up angles and opportunities to land his most devastating weapon.

With an outstretched left arm when defending, Fury poses a problematic obstacle for Wilder to nullify. Fury also keeps his chin tight to his shoulder with an ability to roll; opportunities are few and far between for Wilder to land without forging the opening himself.

This is where a more varied and mobile jab could prove the difference for Wilder in his attacks. The left hand of the Alabama fighter is an underrated tool in his box; one that against poorer opponents can do significant damage. Doubling up on it and going south to the body will open up Fury’s guard to create angles that are hard to create with a continuous straight left down the pipe.

This change in approach will leave Wilder more open and susceptible to counters, but in against an opponent that will continue to win round-after-round without needing to offer too much, rolling the dice is an essential tactic to lure Fury into a trade-off.

After parting ways with trainer Ben Davison, Fury announced his return to the Steward family, with Javan “SugarHill” Steward guiding Fury through training camp for the rematch.

The narrative surrounding this change has focused purely on the addition of power to Fury’s game, with the Kronk Gym famed for producing power-hitters. Fury is claiming a desire to sit down on his punches more convincingly, turning them over stronger in an attempt to land more fire on Wilder than in the first fight.

The genesis of this inclination to add power can be traced back to December 2. 2018. Waking up without the WBC strap next to him, Fury rightly felt aggrieved by the judge’s interpretation of the contest – notably Alejandro Rochin who saw the fight 115-111 for Wilder – with a decision made to attempt to take the fight out of the hands of the three observers.

This could be a huge bluff from Fury. To suggest that he will hunt the KO of Wilder would ask a multitude of questions of his defensive nature – to even contemplate throwing with someone who has Wilder’s power seems a foolish tactic.

If this added power comes more naturally, welded together seamlessly with his typical movements, game plan and elusiveness, then adding a percentage of sting in his attacks will earn further respect from Wilder, possibly reducing his advances.

If a bi-product – intentional or unintentional – of this power is added weight on the Fury frame, then fears will grow regarding his ability to dance for the 36 minutes of combat.

Has either fighter improved since their previous fight?

Since the first fight, both Wilder and Fury have notched up wins against two opponents.

In Knockout of the Year contenders and winners, Wilder dismantled both Dominic Breazeale and Luis Ortiz in the only way he knows how: explosive right hands down the pipe leaving his victim cold on the canvas.

Impressive, but nothing new. Wilder has often been referred to as a “one-trick pony”, but boy, what a trick.

The WBC champion has recently made claims that he suffered a broken hand in preparation for the opener.

”I only had one hand. The right hand was very off,” he claimed to BT Sport. “In camp, I didn’t want to throw it to injure it even more. I felt like if I reserved and threw it in the fight and broke it in the fight, then I’m getting paid.”

Whether this extra alleged 2%, 5%... 10%(?!) will be visible or impactful come fight night is the key to whether Wilder can implement any real improvements to his artillery that haven’t come in more technical areas from another camp with Jay Deas.

Fury’s wins over Tom Schwarz and Otto Wallin played out as contrasting nights at the office for the “Gypsy King”. Blasting out the German inside two rounds did the job on his Top Rank/US debut; a bloodied battle with Wallin over 12 gruelling rounds wasn’t in the script.

Improvements to his last performance against Wilder are expected. Fury was considered by most to be taking the Wilder fight too soon after his comeback, with his conditioning, skin and emotions still swimming upstream following years of inactivity and abuse.

With time to fine-tune his game with the additional mentorship of Javan Steward, the Tyson Fury that enters the ring next Saturday should be better equipped to deal with what Wilder throws his way.

Questions of motive and desire from Fury have also been raised, with his extra-curriculum activities potentially causing a distraction to preparations this time around.

Is Fury’s eye a problem and a target?

”Once it’s open again and the blood is in his face I’m coming in for the kill,” Wilder claimed when asked about the cut Fury suffered against Otto Wallin. “I don’t play around.”

Five-months to heal a deep wound that needed 47 stitches seems a tight turnaround. Fury was able to deal with the drama that accompanied the cut last September; however, limited vision against the speed and power of Wilder may prove a different obstacle all together for the Briton.

There’s a chance it doesn’t open up. Mick Williamson, famous British cutsman, claims the number of stitches applied to the cut can only be a good thing.

”Forty-seven stitches sounds terrible, but it’s really, ‘the more, the merrier’ in that situation. They are not going to hurt you, and the more you put in, the tighter the wound is bound and quicker it will heal.”

”That many stitches mean he has probably had micro-plastic surgery, stitches inside the cut and then on the skin on the outside, and that is the best way.”

It’s a guessing game whether this will impact the fight, but Wilder may choose to be more aggressive in the clinch, with the referee needing to keep a close eye on potential head clashes.

To suggest the right eye will be a specific target for Wilder early in the fight is impractical – the attacks that follow IF the cut opens is where the fight could be won or lost.

But hey, he survived a real pummeling from Braun Strowman in October. Perhaps, these concerns are misplaced.