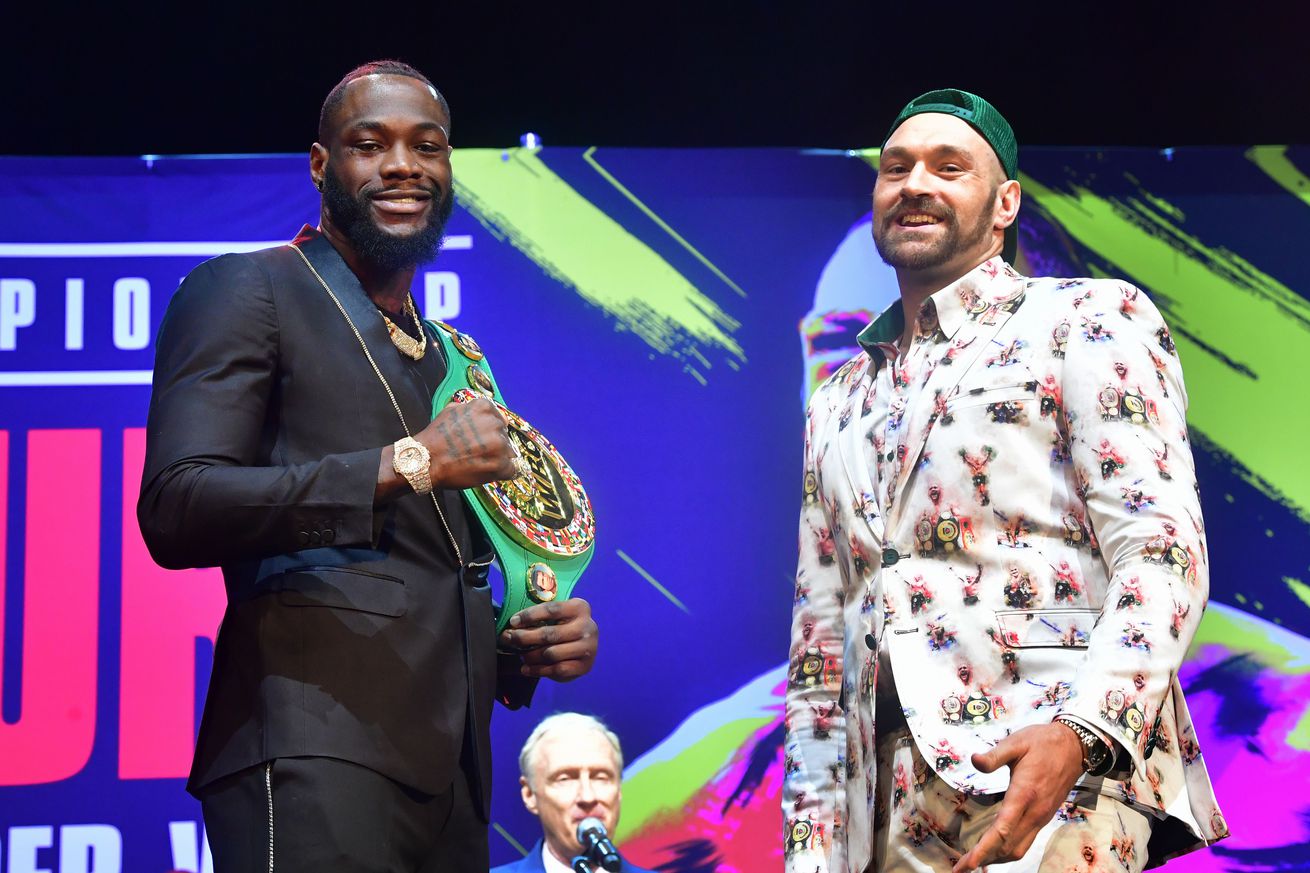 We’ve got an obvious main event this week, as the biggest fight so far in 2020 is upon us.

ESPN2 / FS1, 4:30 pm ET, Wilder vs Fury 2 press conference. The fighters will meet up for the final presser in Las Vegas, and Wilder and Fury both always have plenty to say. Let’s see if they do some SHOVING! to sell the fight further. (Believe it or not it actually does increase interest. We saw a marked spike in interest for Canelo-Jacobs after their little shoving sesh at the weigh-in last May.) BLH will have live coverage.

ESPN+, 2:30 pm ET, Golden Contract tournament. Both the 126- and 140-pound tournaments are lined up here, which means four fights, all set for 10 rounds from London’s York Hall. The matchups haven’t been drawn as of yet, but the featherweight side has Ryan Walsh, Leigh Wood, Tyrone McCullagh, and Jazza Dickens, and the junior welterweight side has Ohara Davies, Tyrone McKenna, Mohamed Mimoune, and Jeff Ofori. BLH will have live coverage.

ESPN2 / FS1, 6:00 pm ET, Wilder vs Fury 2 weigh-in. These fellas will strip down to their under-trousers and get on a scale, which makes sense for the non-heavyweights making weight, but if I’m a heavyweight, why would I bother? It doesn’t matter what the scale says. You could get up there holding an eating an entire stuffed crust pizza. And when the dork in the suit tells you to stand still, you can just be, like, “Why?” BLH will have live coverage.

Telemundo, 11:35 pm ET, Saul Juarez vs Jonathan Gonzalez, Robeisy Ramirez vs Rafeal Morales. Juarez-Gonzalez is your standard Boxeo Telemundo main event, a couple of also-ran veterans, these guys fighting at 108. Ramirez is staying busy on a non-Top Rank card, following his stunning pro debut loss last August, and a November return where he far more quietly picked up a win. Morales is a 3-0 teenager from Laredo, Texas.

ESPN+, 3:00 pm ET, Brad Foster vs Lucien Reid 2. Usually we’d do live coverage for this card, but not this week. Wilder-Fury 2 is a proper big fight week and it’s going to be proper chaotic, and the idea of spending several hours on something that frankly has minimal interest ahead of a card where I’ll be doing long overnight hours just isn’t appealing to me. Not a bad fight though, British 122-pound title on the line in a rematch of a good fight from last September.

ESPNews / FS1, 7:30 pm ET, Wilder vs Fury 2 prelims. Honestly, I’m not completely clear what’s going to air here, because the original word was it would be an extensive prelim show with six (6!) fights shown and a long hard sell for the PPV blasted out on ESPN and FOX networks, but there will obviously not be six fights shown between 7:30 pm ET and 9:00 pm ET. Actually we’re getting a far less extensive prelim show than is now the standard for any ol’ random show. Whatever it is, we’ll be here, and the fights set for the show are listed on our schedule page. BLH will have live coverage.

ESPN, 8:00 pm ET, Wilder vs Fury 2 prelims. It’s the same show but the ESPNews feed will switch to ESPN. The FS1 feed will stay on FS1. We’re covering all bases here. BLH will have live coverage.

ESPN+ PPV / FOX PPV, 9:00 pm ET, Deontay Wilder vs Tyson Fury 2, Charles Martin vs Gerald Washington, Emanuel Navarrete vs Jeo Santisima, Sebastian Fundora vs Daniel Lewis. The undercard ain’t much, another Navarrete mismatch on paper (old school! he fights a lot!), and Martin-Washington is relatively hilarious as a heavyweight eliminator, though it could be an OK fight if they come to throw hands. Fundora-Lewis is interesting. But obviously everyone is here for Wilder-Fury 2, period. It’s without question the biggest fight on the schedule right now and could well wind up the biggest fight in boxing in all of 2020. BLH will have live coverage.

ESPN2, 12:30 am ET, Wilder vs Fury 2 post-fight. ESPN look to get the half-hour jump on FOX in post-fight coverage.

FS1, 1:00 am ET, Wilder vs Fury 2 post-fight. FS1 will also have post-fight coverage, but theirs is being delayed a half-hour compared to ESPN’s due to the Villanova-Xavier basketball game that will be on beforehand.