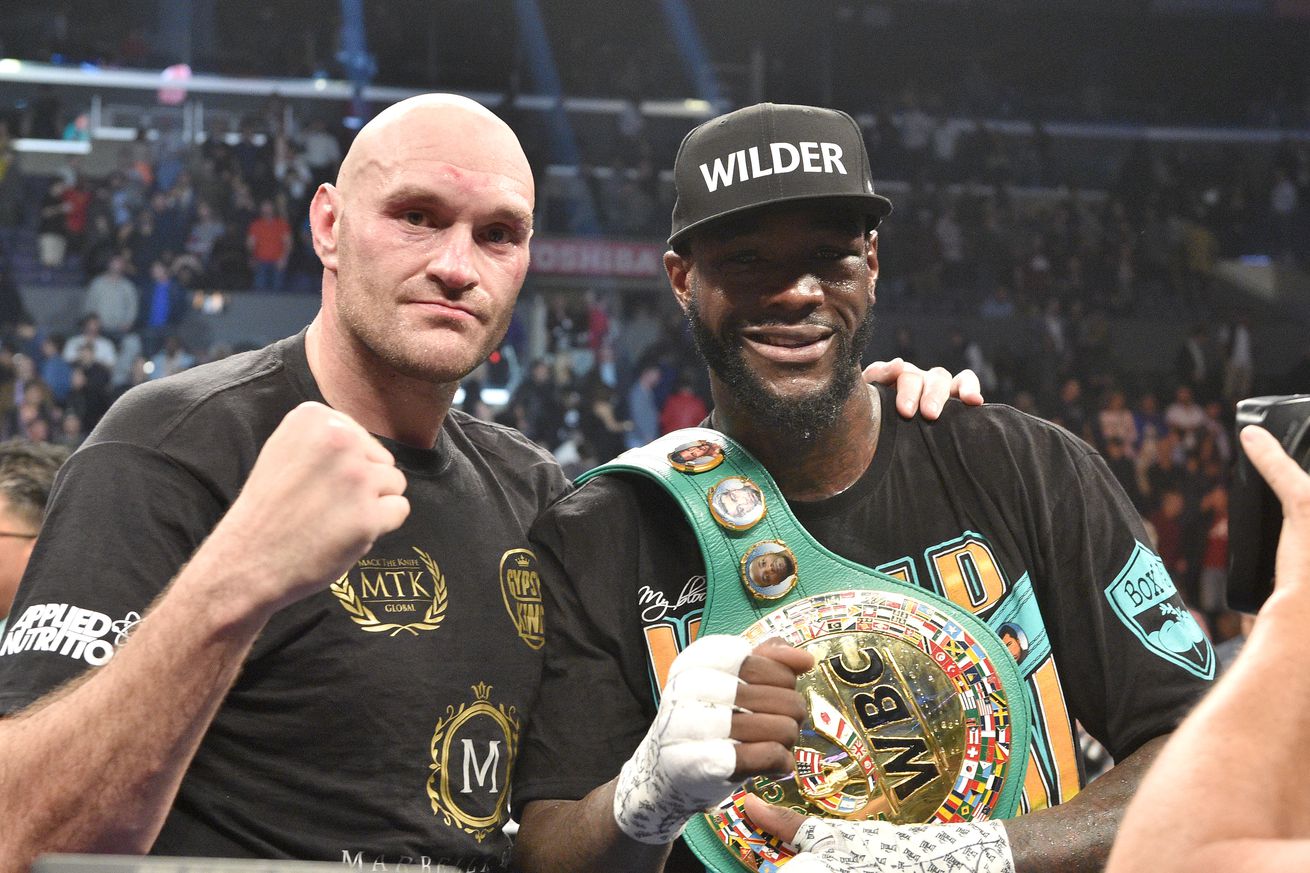 In one of the most controversial and talked-about fights of the post-Mayweather era in boxing, Deontay Wilder and Tyson Fury fought to a dramatic draw in 2018. Watch the full fight below.

When Deontay Wilder and Tyson Fury met in 2018, it was the delivery of a promise from nearly three years prior. The two first met up in the ring in Jan. 2016, right after Wilder had knocked out Artur Szpilka. They had a heated confrontation in a pro wrestling promo style (something both are quite good at), and promised a fight.

At that moment, Wilder was a hot property, the WBC titleholder known for his knockouts, a rising American star in boxing. Fury was as hot as it got at the moment; two months prior, he’d ended Wladimir Klitschko’s long reign of dominance with an upset decision win in Germany.

Fury-Wilder was the fight to make at heavyweight at that moment. But it didn’t happen. Fury went through some personal problems outside of the ring, which led to him canceling a scheduled rematch with Klitschko and eventually giving up all his belts and stepping away from the sport.

We saw Fury now and then between 2016 and 2018, ringside for some fights, doing interviews on occasion, some of them brutal in their honesty about the mental health struggles he was going through in his life, his drug problems, and his distaste for the business of boxing.

He ballooned in weight, and by the time he started training for a comeback in 2018, he was nowhere near ring shape. In reality, he was nowhere near ring shape for his first fight back, where he stopped overmatched Sefer Seferi after four rounds in June 2018 in Manchester, fighting on a Terry Flanagan undercard. In August, he fought in Belfast on a Carl Frampton undercard, having dropped more weight, going 10 full with Francesco Pianeta.

Fury was displaying how serious he was about his comeback by dropping all ego and fighting on undercards. Compare that to, for instance, David Haye, who stepped away from the sport after a 2012 win over Dereck Chisora, then came back in 2016 for a pair of fights where he was the headline attraction on a UK comedy channel called “Dave,” fighting Mark De Mori and Arnold Gjergjaj in ridiculous contests.

There’s nothing necessarily wrong with the way Haye did things, mind you; he was an attraction, and he was back to make some money. Fury, though, seemed more like he’d come back to re-conquer the sport. It wasn’t a whole circus with him. He took his fights and got the rounds he could get.

Meanwhile, Wilder had just kept knocking opponents out between 2016 and 2018. There was a lot of demand for Wilder to fully unify the division with Anthony Joshua, but the two sides had major problems making a deal. Blame who you want there, one side or both, someone else, the Illuminati, whatever, but the fight wasn’t happening.

So in stepped Fury, rekindling that fire with Wilder. Six months after a soft return to boxing, Fury was back in a marquee main event against one of the current top names in the sport. He took the fight Anthony Joshua and Co. wouldn’t. He went to Los Angeles to do it, knowing he wasn’t going to be in totally peak condition.

The event drew solid interest on Showtime pay-per-view, coming in at a reported 325,000 buys, which was quite good given neither of them had been proven as a pay-per-view attraction to that point. And the fight itself became one of the most-discussed, controversial fights in the post-Mayweather era for boxing, leading us to a long-awaited, hugely-hyped rematch this coming Saturday.

If you didn’t see the fight a couple years ago, watch it up top and get ready for these big boys to go again in four days. They’re both promising a knockout this time, with Fury saying he’s going to push his chips into the center of the table and go toe-to-toe with the single most feared puncher we’ve seen in a long time. Whether that’s just talk remains to be seen, but Fury has a habit of backing up his crazy claims and dreams, and we know Wilder can bang.

Will Saturday’s rematch look like the first fight, or totally different?