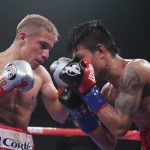 The 22-year-old Soto was making the first defense of the title he won on June 21, stopping hard-hitting Angel ‘Tito’ Acosta in the final round.

The fight also marked the meeting between two junior flyweights ranked in the top-10 by The Ring. Soto entered the fight ranked No. 5, two spots above Heno.

The shorter Soto was the more effective fighter during the first two rounds, utilizing his speed to connect several lead and counter right hands to Heno’s head. Heno was credited with a knockdown of Soto with about 30 seconds left in round three, landing a left hand to the right side of Soto’s head.

The southpaw Heno was utilized his speed and precision-punches to outland Soto during the middle rounds. His best work was when he pinned Soto against the ropes and connected with several combinations. By round nine, Soto looked like he got a second wind, coupled with Heno’s punch output dropping. Soto momentarily stunned Heno with a right hand to the head with about a minute left in round 10, but was unable to follow up with anything to at least knock down Heno.

Although he was game, Heno’s punches had very little effect on Soto during the final two rounds of the fight. Soto looked more energetic as the bell sounded to end the fight.

In the co-feature, former WBO world junior flyweight titleholder ‘Tito’ Acosta stopped Raymond Tabugon of the Philippines in round five.

Thursday’s fight marked Acosta’s first at 112 pounds. It was also his first fight since his controversial knockout loss to Soto on June 21, a fight in which Acosta was up on the scorecards entering the final round, but many at ringside thought the fight was stopped prematurely after he was stunned by Soto early in the round.

Tabugon, who has faced prospects and contenders as a gatekeeper, entered the fight having lost three of his previous five bouts.

Acosta cruised through the first two rounds, outboxing and outlanding Tabugon. With less than a minute in round three, a left hook momentarily stunned Acosta. Tabugon attempted to follow up, but was unable to land anything clean onto Acosta.

The Puerto Rican fighter swung momentum his way in round four, landing thudding punches to the head and body. Acosta’s punches finally took their toll one round later as a left hook to the head dropped Tabugon to the canvas. Tabugon beat the count and bravely fought back, but was dropped by a left hook to the head that dropped him to the canvas, prompting referee Raul Caiz, Jr. to immediately stop the bout at 1:02 of round five.

In junior middleweight action, Raul Curiel battered Jeremy Ramos before stopping him in round seven.

Curiel, who represented Mexico at the 2016 Olympic Games in Rio de Janeiro, improves to 8-0, 6 KOs.

The 23-year-old was the aggressor throughout most of the fight against the game Ramos, mixing his attack to the head and body with one-two punch combinations. Ramos (11-8, 4 KOs), who resides in Colorado Springs, Colorado, had his moments, but his punch output began to drop as Curiel’s punches began to take their toll.

The end came in round seven as a barrage of punches from Curiel, culminating with a right to the jaw dropped Ramos to the canvas. Ramos remained on one knee as referee Jerry Cantu counted him out at 1:15.

Curiel, who is trained by Freddie Roach, is managed by Frank Espinoza.

Junior welterweight Jonathan Navarro of East Los Angeles knocked out Nicaragua’s Lebin Morales (17-6-1, 8 KOs) at 1:49 of the second round. Navarro, who is trained by Robert Garcia, improves to 17-0, 9 KOs.

Lightweight Nicholas Sullivan (2-0, 1 KO) of Norfolk, Virginia, knocked out Gilberto Aguilar, who was making his pro debut, at 1:50 of the opening round.