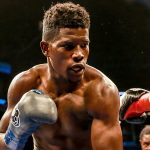 It stayed with him for a while, like skunk spray imbedded in clothes. Erickson “The Hammer” Lubin carried the stain of a first-round 2017 knockout loss to then-WBC super welterweight titlist Jermell Charlo at Barclays Center in Brooklyn, New York.

It’s a day he would like to forget. That fight took place almost exactly two years to when Lubin (21-1, 16 knockouts) takes on Nathaniel Gallimore (21-3-1, 17 KOs) this Saturday in a scheduled 12-round super welterweight bout on a Premier Boxing Champions card on Showtime (9 p.m. ET/6 p.m. PT) from the Santander Arena in Reading, Pa.

Since then, the 5-foot-9½ southpaw has changed trainers, opting to work now with Kevin Cunningham.

He’s changed his attitude and perspective with it, too.

“I feel like I’ve grown a lot from that night (against Charlo),” Lubin said. “I went from one of the hottest young fighters in the game, and then become overlooked and underrated. I feel like I made a decision to move to Kevin Cunningham, I feel I’ve pushed my team to another level.

The Charlo loss, Lubin admits, never goes away. But the pain of it has eased through time. The Hammer he can’t go back in time, and he deals with the frustration that it wasn’t completely him that night.

“I’m a winner,” Lubin said. “Losing is something I can’t accept. It happened that night. I plan on dominating everyone in front of me, making a huge statement every time out. I promise I’ll get Charlo real soon, and the outcome will be different.

“I’ve matured. I’m definitely more patient. Kevin Cunningham has dealt with southpaws his whole life, so he can grow my game. I prepare for fights differently. I don’t have short camps like I did before.”

“I didn’t have a solid game plan, I tried to knock Charlo out and I was trying to make a statement in my first title shot and I got careless,” Lubin said. “Charlo is good. He’s very good, athletic and strong. But Charlo isn’t great.

“I should have had a longer training camp and let my hand completely heal.”

Lubin, 24, has won three-straight fights within the distance since the Charlo loss. He stopped tough veteran Ishe Smith for the first time, and scored a pair of four-round stoppages over journeymen Silverio Ortiz and Zakaria Attou.

As for Gallimore, a replacement for former U.S. Olympian Terrell Gausha, who suffered a hand injury during training camp, Lubin wants to continue the statement-making pace.

“You learn a lesson in losing, which is something I don’t plan on doing again,” Lubin said. “I lot of people turned their backs on me. I’m not saying family and friends, but people who you thought were fans completely put me out.

“I’m going to show a little of everything against Gallimore. I want to show my boxing ability and show I can go toe-to-toe. Gallimore is tougher than Ishe Smith. He presents the perfect style for me to face.”

Lubin is fighting in a venue that is about a 70-minute drive from Philadelphia, where a particular Philly fighter happens to reside and who may be there ringside, IBF/WBA super welterweight beltholder Julian “J-Rock” Williams.

Williams has a scheduled title defense for January 18 in Philadelphia.

Could Lubin be showcasing for that shot?

“That’s not too much of a reach,” Lubin said. “I have to take care of Gallimore first, but after that, I know the world will be watching. I know J-Rock may be there. I’m only 24. I have my whole career ahead of me.

“J-Rock had a tough fight against (Jarrett) Hurd. Smith was a tough fight for J-Rock, too. If J-Rock can’t unify, I want to be included in the mix. I wouldn’t mind a fight with J-Rock, Charlo again or (WBC super welterweight titlist) Tony Harrison.

The post Erickson Lubin looks for his next step at redemption this Saturday appeared first on The Ring.