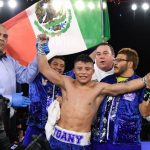 PHILADELPHIA, PA — Thomas Mattice was not playing along. It didn’t matter to Mexican lightweight Isaac Cruz. Head down, chin on chest and willing to play the chasing game, he bulled forward, missing with looping, wild swings sometimes, and connecting with rib shots when he was able to burrow into Mattice’s grill.

Cruz was not about to let Mattice end his winning streak.

Cruz won a majority decision on Showtime’s ShoBox: The New Generation Friday night from the 2300 Arena in Philadelphia, winning on the scorecards of judges Steve Weisfeld (96-94) and Adam Friscia (96-94), while judge David Braslow had it 95-95. Friscia and Braslow gave Cruz (19-1-1, 14 knockouts) three of the last five rounds, and Weisfeld gave him four of the last five. “We were going for the knockout, but it didn’t come up so we’ll take the decision,” Cruz said. “I thought I won all 10 rounds. I don’t know what fight the judges were watching. Round one to 10 I dominated and I was never hurt.

“I’m very happy and have to thank Manny Pacquiao Promotions and Sean Gibbons for giving me this opportunity and having the confidence in me to get this fight.”

It was a stunning loss for Mattice (15-2-1, 11 KOs). He was hoping to build momentum off his huge victory last September over promising lightweight prospect Michael Dutchover—in Dutchover’s hometown.

Cruz, however, won for the eighth-straight time. The 21-year-old fireplug has not lost since February 2016.

He put constant pressure on Mattice throughout the fight, hurting Mattice with a left hook to the chin with :50 left in the seventh, and a right to the head in the last :10 of the round.

In the final :20 of the ninth, Cruz plowed Mattice with a left hook once again to the face.

At the outset of the 10th, Cruz pounded Mattice again with a left hook. Mattice took it, and before long, it was Mattice bouncing shots off of the courageous Cruz.

“I came up short,” Mattice said. “He was the better man. He could hit a little bit. I started out a little slow, trying to see what he had. He jumped out to an early lead; I was just trying to get familiar with his power.

“I have no excuses. He was the better man tonight.”

In a scheduled eight-round junior featherweight fight featuring a pair of 29-year-olds, Raeese “The Beast” Aleem (16-0, 10 KOs) won by fourth-round stoppage when the corner of Adam Lopez (19-4-2, 9 KOs) ended it.

The official time came at 1:31 of the fourth, after Lopez was bleeding from his nose and a cut on his hairline.

“I put in a lot of hard work,” Aleem said. “I didn’t see any film on the guy but knew he was a tough Mexican fighter. Once we got in there, I could see the speed difference. I could see his punches coming. I did rush some punches and made some mistakes. But it was good and I kept my hands up and my speed and movements were good. And I’m glad I stopped him. I didn’t want to go the distance.

“I can’t wait to be back on ShoBox. This is a long time coming and I feel like I should have been here, but I’m here now.

Aleem opened up in the second with a barrage of punches that Lopez absorbed well. But through two, it was Aleem who was setting the pace. Something else also appeared: A cut on the left hairline of Lopez.

Two rounds later, Lopez had blood pouring from his nose. That’s when his corner saw enough and wisely waved it over.

“I give my performance a C-plus,” Love said. “I could have been more active in there. I didn’t get hit a lot, I felt good. I hurt him a few times but I let him off the hook.

“I was getting off good shots, and the thing I’m mad about is that the fight should not have gone the distance. I’m ready for whatever’s next. My team is trying to get me to 135 pounds.”

In the first round, Love, 25, nailed Walton with a right hook. Love connected a few times to the body, while Walton appeared tentative and had no answers in the first three minutes.

With 1:58 left in the second, Love stung Walton with a right hook to the chin. Walton reeled backwards, but regained his balance.

In the third, Walton appeared to wake up. After losing the first two rounds, Walton climbed back into the fight with a strong third, connecting with a couple of left hooks.

Walton connected with a right in the fourth that seemed to rock Love, who stumbled back. It was the most effective punch of the round, and it looked like the fight was even after four.

Walton went back to his mauling, crowding tactics in the fifth. He chopped Love in the body, and forced “Too Pretty” to fight in his phone booth. It was not “pretty,” but it was effective.

Love started the sixth staying outside and using distance. Love landed a looping right to Walton head with :45 left in the round.

After six, it was possible to see the fight at 3-3.

A Love right hook to Walton’s chin appeared to change the course of the fight. Walton backpedaled, and looked like he was in trouble. Love saw this and jumped on his dazed opponent. Walton valiantly tried defending himself later in the round. But Love would not let up. He put constant pressure on Walton, who was fortunate to survive the round.

Walton had a good eighth, though apparently it was too little too late.

“I’m very disappointed but I’m not going to stop. They’re going to see me again. This is only going to push me harder.”

In the first TV fight, Joseph “Action” Jackson (16-0, 12 KOs) pulled off a mild upset by winning a unanimous eight-round junior middleweight decision over Derrick Coleman Jr. The setback was Colemon’s first as a pro.

“We just dug deep and got the job done,” Jackson said. “I’d give my performance an eight out of 10. I know I can show better. I had about 40 people come out from Greensboro, N.C., and support me.

“I’ll fight whoever they put out in front of me next. It’s SHOWTIME and my first televised fight and outside of North Carolina so it was important to put on a show.”

Colemon, 20, was the stalker early on. He clipped Jackson with a couple of left hooks and worked okay behind his jab.

Then, his work rate dropped off toward the middle rounds and it was Jackson on the attack.

The 31-year-old from Greensboro, North Carolina, was backing Colemon (11-1, 9 KOs) up from the fifth through the eighth round. Jackson even stunned with Colemon with a pair of straight lefts in the seventh. Jackson again pressed Colemon in the eighth, and what appeared to be an easy fight early on for the 20-year-old from Detroit, Michigan, began turning into something serious.

By then, it was too late.

The judges and everyone at the 2300 Arena had no problem with the final verdict.

The post Isaac Cruz outlasts Thomas Mattice on ShoBox from Philly appeared first on The Ring.