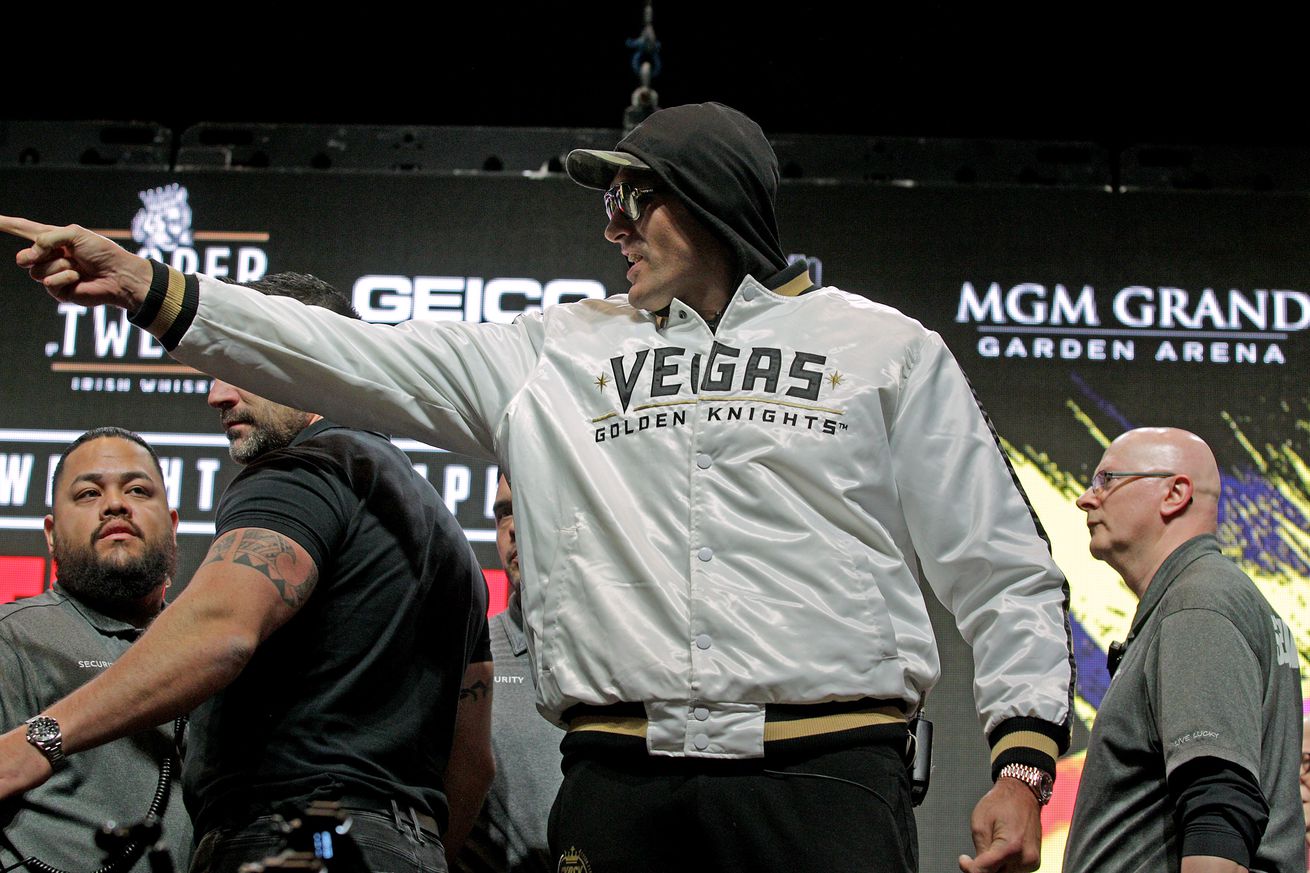 Tyson Fury’s pre-fight behavior and statements have some thinking he might not be where he should be mentally.

Were you like me as you watched the Deontay Wilder vs Tyson Fury 2 press conference today, looking at Fury and wondering if he was playing us all, totally, somewhat, or not really?

First off, he strides to the stage, as emcee Joe Tessitore looks on, and he’s dressed like the Unabomber. Bulky sports wind-breaker over a black hooded sweatshirt, Unabomber-style sun glasses. Hmmm. Maybe it means nothing, maybe he was just wanting to be comfortable. Or was he bulking up so we can’t see his physique, and get an assessment on what he might weigh? And why those glasses? Why not let us check out those windows into the soul?

As you know, Fury has said he will be in the 270s at the weigh-in and fight night, up from the 256½ he weighed the day before his first clash with Deontay Wilder in 2018. Who among you thinks that will help him?

Fury’s ability to move — yes, his feet, but just as much his head and torso — that’s so much of his arsenal. Will that be as good if he weighs 20 pounds more than he did in that first clash with Wilder? Maybe. Maybe not. Hey, let’s note that 20 pounds on the 6’9” Fury isn’t the same as 20 pounds on 6’2” Andy Ruiz. In other words, it might not be that big a deal. But we’re talking about it. And that is promotion, and that will put dollars in Fury’s pocket.

Fury is still sticking by his contention that he’s gunning for a KO-2, and that’s why he dumped Ben Davison for Javan “SugarHill” Steward, to get more grounded in an offensive mindset.

“Wanting to go head-to-head with him is a bold move, but we fight fire with fire,” Fury said during the presser, which featured a back-and-forth shove, and also Wilder getting the nod for the intensity and focus of his trash talk.

“When I went at him in the first fight, though, he could not contain me,” Fury said. “If I start doing that in round one, then he will be gassed by round five and hanging on for dear life, if he even gets that far.

“It’s been no secret that I’m looking for a knockout. That’s why I hired ‘SugarHill’ and went back to Kronk. He gets you to sit down on that big right hand, and that’s the game plan.”

Or is it? I talked to Steward Tuesday, and he was basically saying, “Woods, you gotta wait and see.”

This is Tyson Fury, he said on TALKBOX; Fury might say something and change his mind 11 seconds later. He didn’t say, but it’s safe to say, Fury will say fantastical things to stir the pot, get people talking, shock people, amuse himself. Will Fury truly try a different strategy, and not be the tricky evader so much in this outing? We will have to tune in to find out, won’t we?

Another element that had me scratching my head was Wilder referring to how Fury was coming off a bad run, in which he admitted to using coke, prior to their first tango. Wilder busted on that some in the lead-in to the first fight, and really, it didn’t seem to get under Fury’s skin.

Yeah, Tyson’s a curious one. I haven’t figured him out. You saw his E:60 segment with Jeremy Schaap? He delved into his slide into depression, said that he was bullied as a youth, and was down in the dumps right after he beat Wladimir Klitschko in 2015. He climbed the mountain, stuck his flag in the turf, and then asked himself, “What else is there?”

I’d be not the least bit surprised if I heard that Fury backslid, had a slip, and started palling around with those old friends that are actually bitter enemies in disguise. Even if I hadn’t heard Wilder making the coke references, and also talking about how Fury has been hiding things.

Or that could be reading too much into it all.

I don’t know, I do think that maybe when Wilder makes mention of Fury being “strung out on cocaine, big as a house, and contemplating killing yourself,” that could serve to sap the Traveller a bit, no? That doesn’t get to him a bit, make him feel like that kid on the schoolyard, getting bullied, feeling like an outsider?

One deep insider, who has been around Fury a good bit, said that they thought something feels off with Fury. That person senses that the big lad is at times too loosey-goosey, and wonders if his head is screwed on straight and tight for this mega fight.

Check out this highlights package, get a sense for yourself:

I’ll say this: if Fury wins Saturday, and he adheres to his KO-2 type of game-plan, then I will tip all my caps to the man, and salute him for doing a superb job stirring the pot, keeping me fixated on this fight. If he loses, I will be curious to hear the post-fight comments, because I do suspect that we will be hearing some admissions from the “Gypsy King,” about how there were things going on behind the scenes in the last few months or weeks, leading into the sequel.