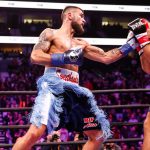 Super middleweight world titleholder Caleb Plant put an end to gossip that he is a potential candidate to face superstar Canelo Alvarez in May.

Following an impressive 10th-round stoppage of Vincent Feigenbutz at Bridgestone Arena in Nashville, Tennessee, Plant (20-0, 12 KOs) who defended his IBF belt for the second time, killed the rumor right in its tracks.

“That means taking half a month off after a three-and-a-half month camp and then go right back to work, right? Just so they can try and get me when I’m overworked.

“You control the narrative, you control the media. (Golden Boy) will make an offer knowing that I just fought so when we say no, then it seems like I’m ducking him. Don’t let them fool you.”

Alvarez (53-1-2, 36 KOs), 29, of Mexico, boxing’s biggest star, is struggling to find an opponent for May. Negotiations with secondary beltholder Ryota Murata fell through and it was reported in recent days that Ring/WBA 168-pound champ Callum Smith and WBO super middleweight titleholder Billy Joe Saunders turned down fights with Alvarez. Sources tell The Ring that the dispute was over money. However, we were also informed that Golden Boy could revisit negotiating with Murata for a bout in Las Vegas. Initial discussions had a potential Canelo-Murata fight taking place in Japan on May 24.

Plant went on to say that a bout with Alvarez will eventually go down.

“I’m a world champion; I’m a world-class fighter — I’m on my time,” he continued. “Don’t be fooled. We’re gonna get to him; (he has) fights left on his contract. Why doesn’t he go beat Billy Joe and Callum and become unified and then I’ll whoop on (WBC titlist) David (Benavidez) and I’ll become unified, then we can fight for all the marbles.”

“That sounds a little better to me,” Plant reiterated.

The post Caleb Plant: I’m not fighting Canelo Alvarez in May appeared first on The Ring.