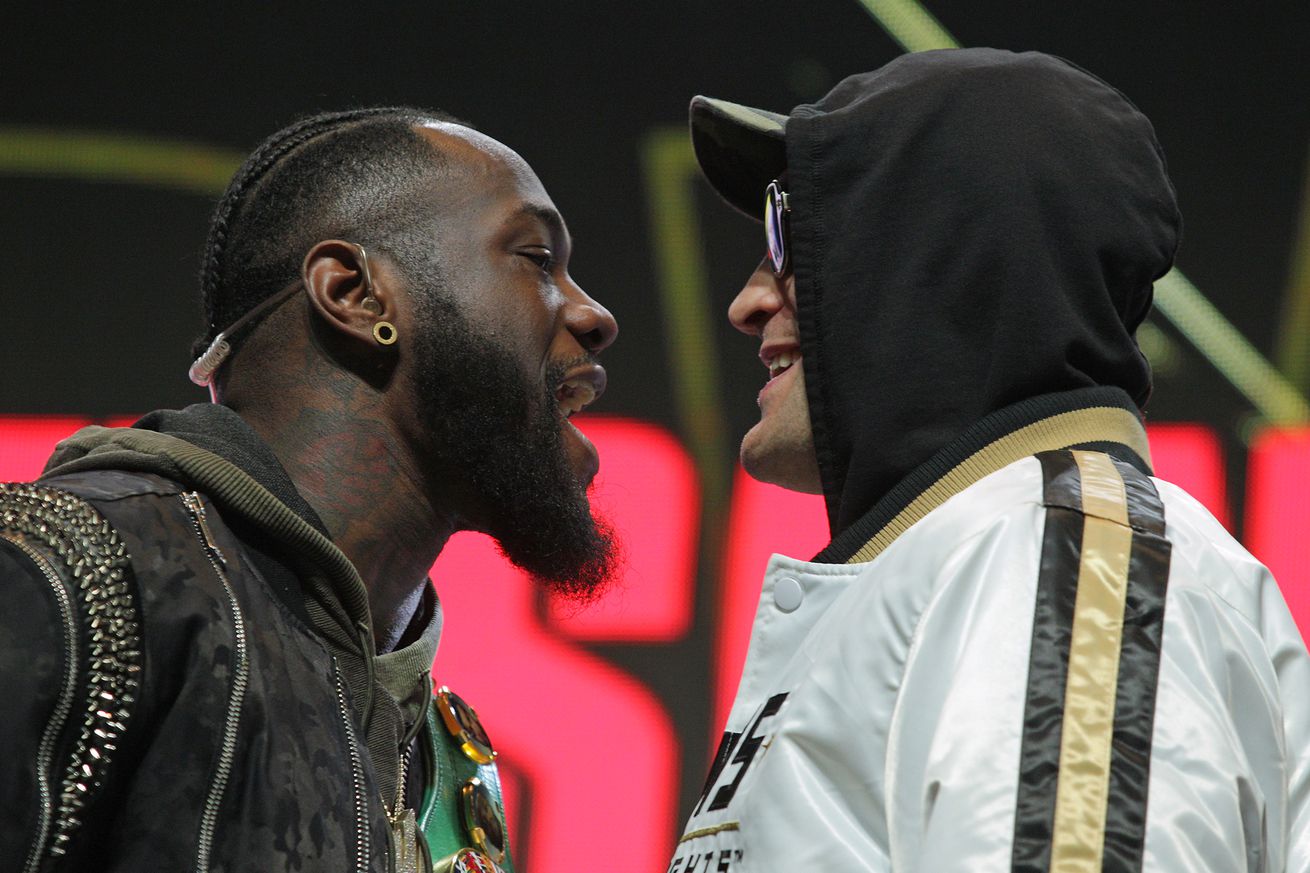 Everyone is pretty much expecting the same “boxer vs puncher” fight, so will we see any surprises tomorrow night?

Deontay Wilder and Tyson Fury are just one day away from their hugely-anticipated rematch in Las Vegas, live on ESPN+ and FOX Sports pay-per-view, and it’s now time for our staffers to lay it on the line.

Who wins tomorrow night? (Also, if you haven’t voted yet, we’ve got a poll open until Saturday morning for you to throw down a pick, and so far the results have been very close.)

Fury hasn’t made a whole lot of noteworthy in-ring mistakes in his career, but he’s certainly made some. Wilder, obviously, dropped him twice the first time they met. Steve Cunningham caught him with a monster right hand in their 2013 fight and put the much bigger Fury on the canvas. He punched himself in the face that one time.

Fury’s a better boxer than Wilder, but it barely mattered enough the first time. I thought Tyson deserved the win on the cards, too, but he really, seriously almost didn’t make it out of that fight on his feet. That he did felt half a miracle the way he went down in the 12th. I don’t think he avoids it for another full 12 with Wilder, and I don’t think we see quite the same Wilder we saw in November against Ortiz. Yes, if Wilder fully does almost nothing and just waits for the opening, he may not get it against a dialed-in Fury. But I don’t think Wilder respects Fury’s return fire the way he did Ortiz’, either, so I can see Deontay taking some more risks trying to lead the dance here.

Fury is good at negating opponents; we saw that against Wladimir Klitschko, which was a masterclass in its way, but not exactly the sweetest example of the science, and we saw it against Wilder. But I think Wilder and his team are well aware of what not to let Fury do if they can help it this time around. I also tend to think Wilder is a smarter and better-prepared fighter than he’s often given credit for being. And I believe that “Alabama Slamma” of a right hand will find its mark and get the job done this time. But the bottom line is you can’t ask for a lot more than this as a boxing fan. For once, we have the sort of fight everyone wants to see, and it’s the sort of fight that too often just does not get made. Wilder KO-9

Don’t believe the hype. I don’t care what Tyson Fury has been saying about changing his approach and looking for an early knockout against Wilder this time around - that’s just some bullshit to sell the fight. Believe a fighter by their actions more than their words, and I think Fury has already tipped his hand. Obviously most everybody thought Fury outpointed Wilder in their first meeting, easily outboxing him over the distance save for those two knockdowns. Well, in the rematch you can bet Fury will try to do more of the same, but this time without the knockdowns. And if anything, I think his change in trainer to ‘Sugar’ Hill demonstrates that.

The Kronk gym is obviously legendary in the sport, but I believe their fundamental teaching philosophy is much more adhered to sharp boxing than teaching fighters to be knockout artists. You can really see that in their fighters’ styles. And before any of you get all up in arms, referencing the likes of Tommy Hearns or Wladimir Klitschko, note that those two were naturally gifted punchers who learned sound technique at Kronk in order to land their power rather than the other way around. Fury is not a naturally gifted puncher, and he’s not going to become one under Hill. In this rematch I think Occam’s razor applies. If Fury knows he can fairly easily outbox Wilder, why expect him to rumble when that plays into Wilder’s hands? I certainly don’t, and think Fury will end up with the result he probably deserved the first time around. But knowing how this sport can be, I’ll say it’s closer on the cards than it will be in the fight. Fury MD-12

Comparing boxing to chess is a fairly bog-standard analogy, which holds up decently well. Correctly predicting a rematch, then, would require going through each man’s moves, examining how they adapted to one another, and determining the likelier of the two to find an avenue of victory upon resetting the board

Except Wilder-Fury I wasn’t a chess match. It was a guy trying to solve a Rubik’s Cube rigged to explode if turned the wrong way. There’s no adaptation to be done by Wilder; his fights are Boolean functions.

The circumstances have not changed: Fury will control every minute of the fight in which both men are conscious, while Wilder will wait patiently until he can unload that cheat code of a right cross and undo all of “The Gypsy King’s” hard work. Seeing as Fury survived that right hand twice and is exponentially more likely to have made the necessary adjustments for a decisive win, I find myself leaning his way. He comfortably outboxes Wilder from the outside, though I expect a judge to give it to Wilder anyway so as to drum up interest for their pre-booked threematch. Fury SD-12

In repeats over Stiverne and Ortiz, Wilder has shown his ability in rematches to draw an emphatic line under a previous victory. On the face of it, Wilder’s reputation has grown over the past year, but fundamentally his modus operandi has remained pretty consistent: why consider a plan B when plan A has always worked? These improvements in rematches were primarily in the result rather than an overall tactical approach – against a fighter as unique and awkward as Fury, Wilder may need more than one tool from his limited toolbox.

Fury’s change in trainer does concern me. Despite a lack of experience swimming in boxing’s deepest waters, Ben Davison helped Fury battle his biggest demons. A happy fighter is a healthy fighter; a change in dynamic and an absence of genuine trust may discolour the perfect cocktail that Fury and Davison created at a specific point in the “Gypsy King’s” career. An increase in discipline from Sugar Hill may see Fury’s reliable and superior boxing instincts restricted.

I’m not sure I am buying this desire from Fury to get the KO. He survived 12 rounds against Wilder when he was still clambering to his feet – physically and metaphorically – and he knows that a fully-fit, fully-concentrated self can ride the storm for another 12 rounds this Saturday without needing to take unnecessary risks.

You know what you’re going to get from Wilder. Fury, less so. His improvements are what this rematch hinges on. Unfortunately, I think we are in for a bit of a stinker. Wilder may get through the guard in the championship rounds, but Fury’s fight management will be a lot tighter and sensible this time around. 117-111 Fury, if you want specifics. Fury UD-12