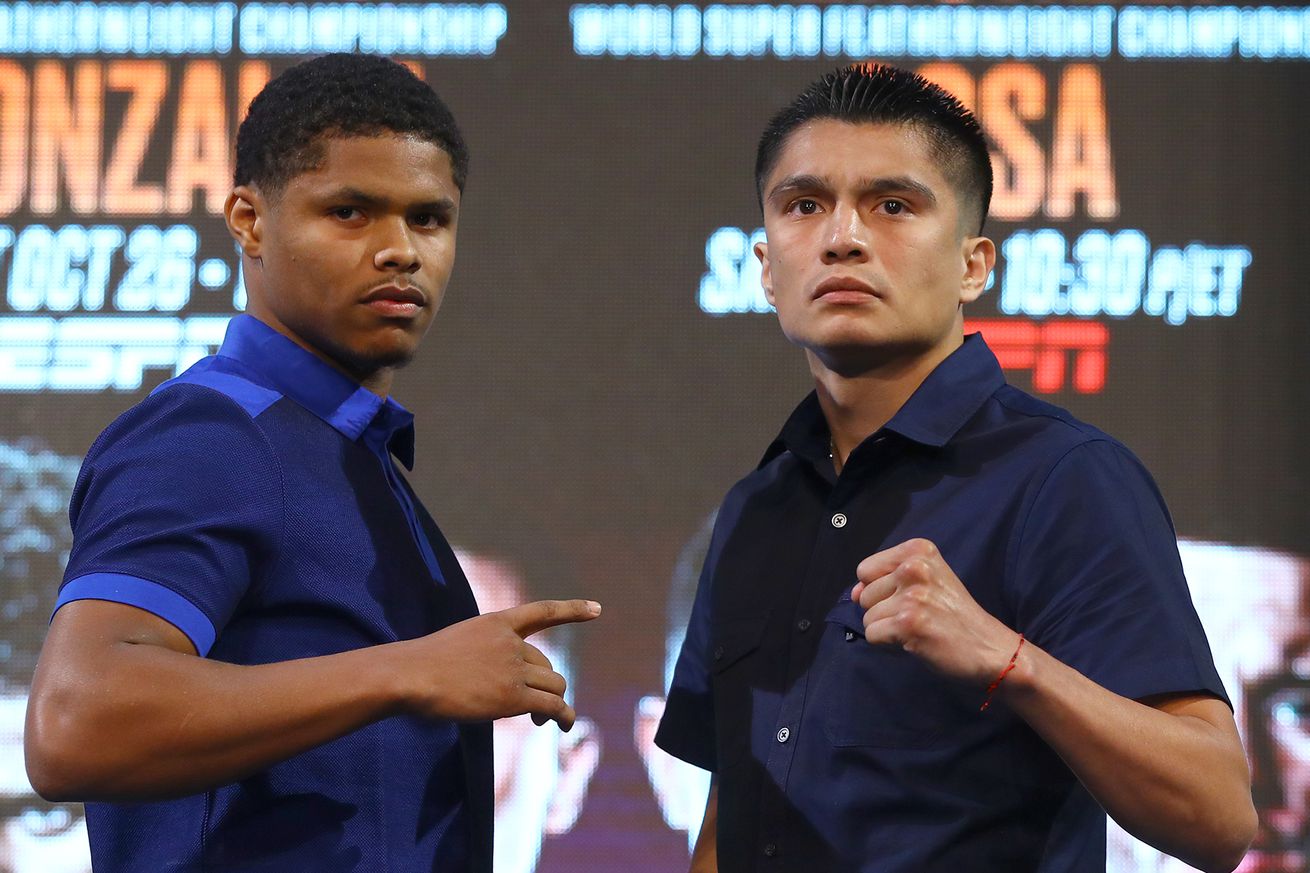 Tomorrow night streaming live on ESPN+, Shakur Stevenson headlines against Joet Gonzalez, a meeting of unbeaten featherweight prospects for the vacant WBO title, given up by Oscar Valdez, who is going up to 130.

As I mentioned in the preview on Thursday, the two actually have fairly similar pro records in terms of what you might call “quality wins” at this stage of their careers, but Stevenson is inarguably the more highly-touted prospect, thought to be levels more promising than Joet Gonzalez, a Golden Boy fighter coming to Top Rank ground for his first crack at a world title.

Stevenson against Oscar Valdez would’ve been really interesting, but based on his recent results, I would’ve picked against Valdez there — he’s been trying to box more, and I don’t think he can box with Shakur Stevenson. If he’d fought like the blood-and-guts Valdez of old, he might have taken Stevenson to places he didn’t want to go. Gonzalez is a solid pressure fighter, but I don’t know that he’s so good at it that he can make Stevenson fight the sort of fight that will give Gonzalez a decent chance at the upset. I am still not convinced that Shakur is the next Floyd Mayweather or Andre Ward, but I think he’s good enough to win this fight and the WBO featherweight belt. Stevenson UD-12

I love the fact that we have two young undefeated prospects ready to bang it out to see who moves forward. Quite frankly, I’d like to see more of the young guns face each other rather that artificially inflating their records against no-hopers before finally taking a step up. Shakur Stevenson was obviously a very highly touted prospect coming off his Olympic run, where he manged to grab a silver medal. Since turning professional Stevenson has shown obvious signs of improvement, and I look forward to watching him take the next step.

Gonzalez, conversely, has never had anywhere near the profile of Stevenson, but has racked up 23 straight wins as he’s taken incremental steps up in class. If Gonzalez wants to get over the hump and really make a name for himself, this is clearly the fight to show up and show out. Unfortunately Stevenson is looking to do the exact same thing, and I think he’s just a more dynamic fighter than Gonzalez. I don’t think either fighter is a tremendous puncher so I expect this to be something of a technical battle, one where Stevenson uses his speed to outscore Gonzalez over the distance. Stevenson UD-12

Gonzalez definitely has the tools to push Stevenson; he pressures well and has more pop than his knockout percentage would suggest. If he can consistently force Stevenson into close-quarters exchanges, the upset isn’t out of the question. Thing is, he has to get Stevenson into those close-quarters exchanges, and I’m not convinced he has the tools to do that. His strategy seems to be to press forward behind a high guard and use persistence in place of top-notch ring cutting.

That’s just not going to work against someone who moves as well as Stevenson, especially since he has the precision to rack up serious damage around a stationary guard. Gonzalez can’t just tank his way through until he finds an opportunity like he did in his last fight; Stevenson will be punishing him from bell to bell. The puncher’s chance is there for Gonzalez, but Stevenson’s combinations and body attack should get him the stoppage in the middle rounds. Stevenson TKO-7

Genuine beef in a world title fight always adds to the occasion. Potential future brother-in-laws put their unbeaten record on the line for the vacant WBO featherweight strap in a fight that should engage the purists. Both are young prospects with amateur pedigree and with styles that are easy on the eye I can imagine this fight well gel quite nicely.

Stevenson has the edge in speed which could dismantle the solid jab that Gonzalez possesses and with a tight defence, Gonzalez may struggle finding the necessary angles to hurt Shakur throughout the fight. Gonzalez has good boxing fundamentals coupled with experience in the pros, but Stevenson looks pretty special. Stevenson doesn’t waste many punches. I can see this fight being stopped with Gonzalez pinned to the ropes with his high guard up, and Stevenson throwing to perfection. Stevenson TKO-9