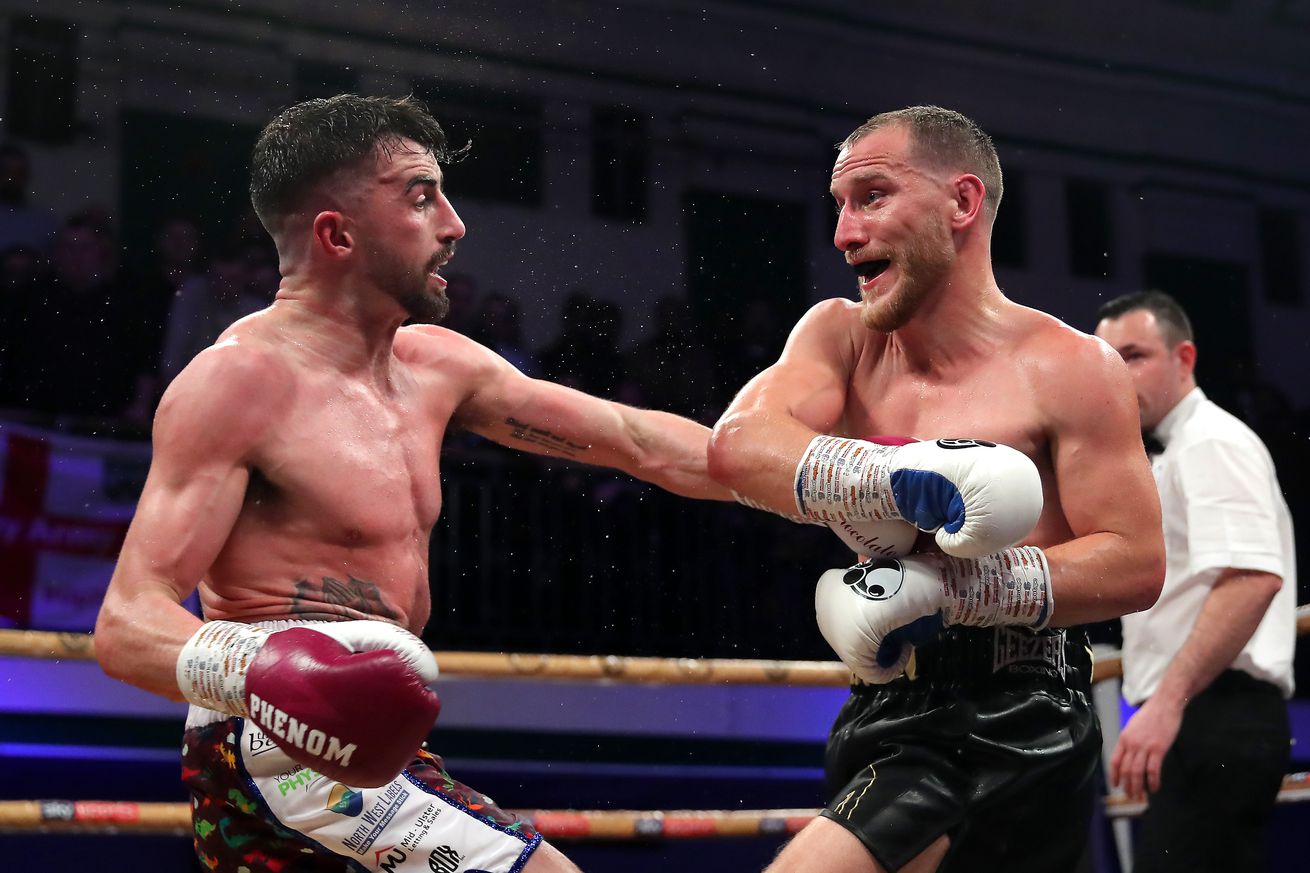 We had a bit of controversy today, but mostly good action from York Hall.

The featherweight and junior welterweight tournament finals in the MTK Golden Contract fields are now set, following mostly good action today in London, though a fair bit of controversy in one of the results.

Here’s a rundown of what we saw.

Dickens had battered Wood around badly in the ninth round, which may have been a 10-8 on one card, making this a majority decision win for Dickens instead of a majority draw, which would have put the result in the hands of the referee as a tiebreaker in this tournament format. (Well, the official result would’ve been the draw, but the referee would pick who goes on to the tournament final.)

But Dickens did enough here, earned the win, and moves on. It’s a tough setback for Wood, who came in on a strong run with terrific performances in his last three fights.

McCullagh (14-1, 6 KO) got started fast here, building an early lead in the first three rounds, but Walsh (26-2-2, 12 KO) found him out from there. Starting in the fourth, Walsh started getting closer to the constantly-moving McCullagh, and that did the previously-unbeaten southpaw in.

Walsh really found McCullagh in the sixth, dropping him after a hard right hand, and he put McCullagh down again in the ninth. Once Walsh got the range and the plan of attack, McCullagh just didn’t have the answers, and Walsh, 33, keeps a strong run going in the featherweight division.

This was a lousy decision. McKenna won on scores of 96-94, 96-94, and 97-93. Bad Left Hook had it 97-93 for Mimoune, and Sky’s Matthew Macklin saw it about the same, both of us feeling Mimoune (22-4, 3 KO) did the clearly better work down the stretch and pulled away in the second half of the fight. At the midway point, I had this 48-47 McKenna, but Mimoune swept rounds six through 10 for me. He was more aggressive, more effective, landing the better blows. It seemed clear, at least to me.

But McKenna (21-1-1, 6 KO) had a rowdy batch of fans that may have helped sway the judges, and he did throw a lot, even off the back foot. Much of his work dinged off the gloves of Mimoune, but it was something to look at, and the crowd responded to it consistently.

As always, I’m not mad at the fighter; McKenna just went out there and fought to the best of his ability, and it was a good, enjoyable fight, too. But Mimoune won this fight, and he got jobbed. That kind of ruins the rest.

This was a really fun fight. Davies (21-2, 16 KO) was the big favorite, but he struggled to make weight, failing on his first attempt on the scales on Thursday. Ofori (10-2-1, 3 KO) was a late substitute for the tournament and got through to the second round on a referee’s tiebreaker decision after a draw with Kieran Gething, but he was really game here, and he fought the way he should have, as the underdog, no pressure, and fearless.

But Davies’ power turned out to be too much. He clubbed Ofori down with a right hand at the very end of the third round, and Ofori’s legs were still bad in the fourth. But he got through that round, and put some pressure back on Davies in the second half of the fifth frame, putting the favored fighter on the back foot. Davies turned it back up at the start of the sixth, and after a series of clean right hands had Ofori out on his feet near the ropes, the referee stepped in.

“I was overlooking him and I was severely underestimating him,” Davies said. “He doesn’t have the experience I do, but I was shocked. I think he’ll go far.”

Davies also said that he hurt his right hand in the second round, and joked (?) that his plan for now is to eat lots of burgers and chips (in America we call them “fries”) before the final round fight in a few months, and let the hand heal itself.