Fury avoiding controversy by not courting discussions of race for Wilder rematch
mvpboxing |  February 22, 2020, 01:00 AM 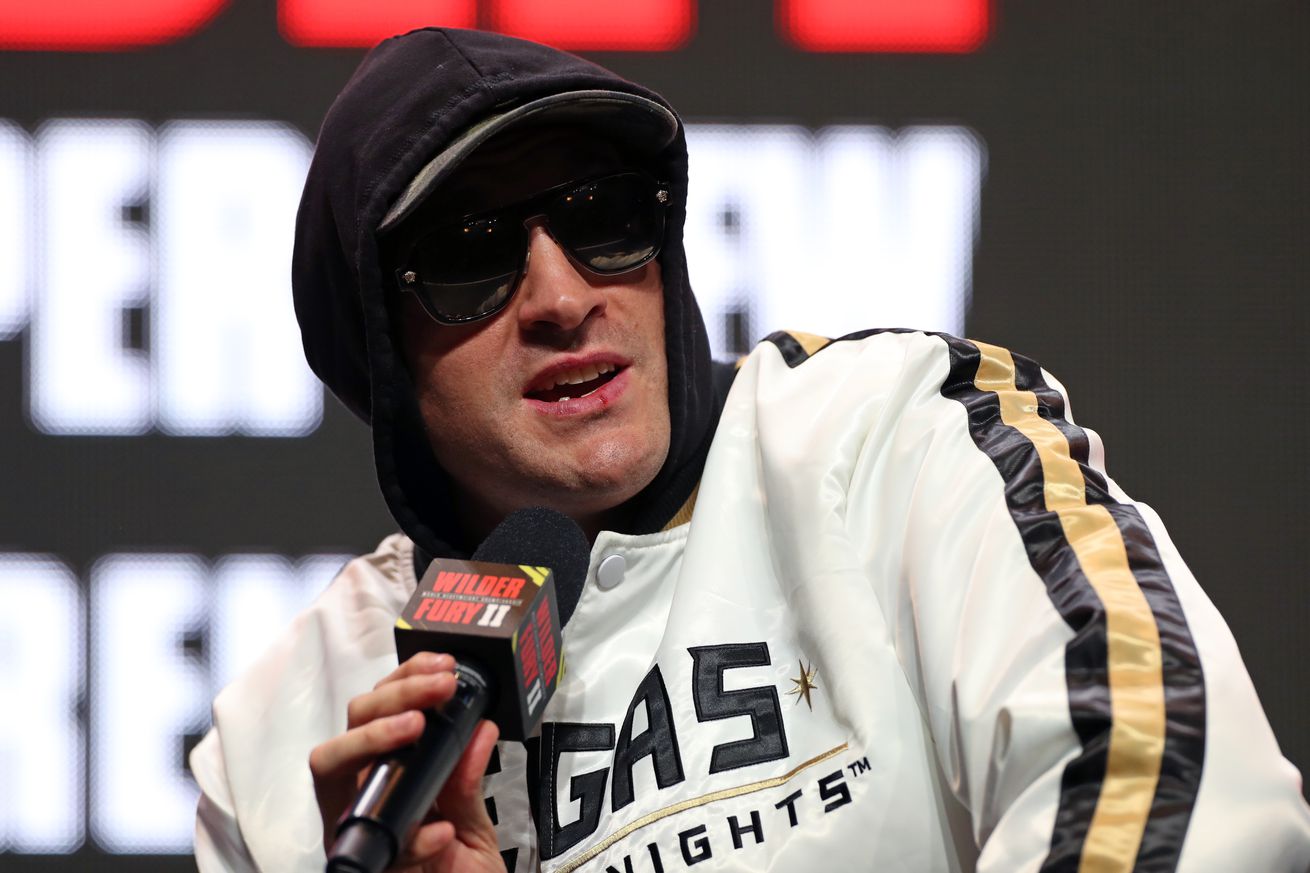 Some have tried to lead racial discussion in the lead-up to Wilder-Fury 2, but so far Tyson Fury has avoided digging in on the topic.

We in America ŌĆö and especially, I think, in this age ŌĆö donŌĆÖt do a good job at focusing on positives.

It makes sense. Brains are wired to ponder negatives. Evolutionarily it makes sense to be on the lookout for danger signs, it helps keep us out of the mouths of the woolly mammoth.

The media also does better when they report on bad stuff; consumers lap it up. It is exciting, sensational and also allows for surges of schadenfreude buzz, or maybe a ŌĆ£There but for the grace of God go IŌĆØ exhale.

In that vein, may I offer that IŌĆÖve been impressed by this element of the Wilder vs Fury 2 promotion: no one has played the racial angle.

Oh yes, it is a most effective way to get attention, playing the race card, putting forth a construct which tens of millions of people would respond to, and would find quite easy to process.

The black guy versus the white dude. Playing up that dynamic would be good for an easy uptick in attention and PPV buys. But when given the ŌĆ£oppurtunityŌĆØ to run with that, the fighters, and especially Tyson Fury, said ŌĆ£No thanks, not gonna play that brand of ball.ŌĆØ

ŌĆ£Deontay, the first fight, you went viral, you had the ŌĆśTo this day,ŌĆÖ you had the knockdowns,ŌĆØ Hale began. ŌĆ£This is Black History Month, are you looking to make a big moment in Black History come February 22nd?ŌĆØ

ŌĆØOh, my God. They picked the wrong day, they picked the wrong month for this to happen,ŌĆØ Wilder answered. ŌĆ£IŌĆÖve said that many times, and when I knock the ŌĆśGypsy QueenŌĆÖ out, weŌĆÖre gonna have a black history trivia question, and itŌĆÖs gonna be spread all over the world, and they gonna be able to write it any type of way they want it.ŌĆØ

Hale followed up with Fury.

ŌĆ£Tyson, question for you. Do you think thereŌĆÖs any chance that Deontay can win a decision against you in this fight, or is the only path to victory a knockout?ŌĆØ

You have to ask Hale if there was any implication inserted in that query ŌĆö like, are the judges pre-disposed against Wilder for some reason or reasons, maybe?

ŌĆ£You know, IŌĆÖm not sure,ŌĆØ Fury said. ŌĆ£But IŌĆÖm not really into this racial thing, with a black man versus a white man, and black history month, and I will refuse to go into any sort of thing about it. We are two human beings, two heavyweights at the top of our game. This is not a racial war, this is two heavyweight boxers going toe-to-toe, for all the jewels in heavyweight boxing. Nothing more, nothing less. IŌĆÖd just like to clear that up nicely.ŌĆØ

Now, letŌĆÖs take a look at this angle, from another angle. (And keep in mind IŌĆÖm a white male, so this take will be filtered through my decades of experiencing the world, a world thatŌĆÖs miles away from someone who, perhaps, has dark skin, and thus has been stopped and frisked, or pulled over by a cop for the infraction of being black.)

Maybe it isnŌĆÖt good that race isnŌĆÖt much discussed as we take a look at this sequel. Maybe it should be on the table. No, not by being sensationalized, or to be used merely as a marketing scheme. But yeah, the three judges on Saturday will be light skinned. Maybe judge sets should be more varied, racially, ethnically, gender-wise. And maybe we do steer away from hard conversations about race too much, and maybe thatŌĆÖs why right now, one of the most important advisors to the President has a long history of espousing white supremacist ideals. Maybe because we have been too polite about it, because too much of the nation had believed the hype about us being an ŌĆ£exceptional nationŌĆØ in ways that, in fact, we are not.

It comes out now and again, interestingly, quite often, in the sports and entertainment realm. It popped up when we heard about the Kobe Bryant tragedy. Bryant was and is an icon in the eyes of many, and many of his fans were beyond annoyed when they heard media pointing out that heŌĆÖd been accused of rape. Mostly white press but no matter who brought it up, that person got slammed. Gayle King was driven to tears as she heard it from the pro-Kobe crew, who wondered why press had to disrespect his memory like that.

Yes, media can and will ŌĆ£go thereŌĆØ because they recognize ŌĆ£if it bleeds, it leads.ŌĆØ That Kobe case provides oodles of drama, enough to serve up more helpings, re-heated 17 years later. And Jason Whitlock at FOX, who does a talking head show with Marcellus Wiley, is more than happy to dig in and offer spin on race matters. HeŌĆÖs provoked debate when heŌĆÖs said LeBron James is too rich and famous to experience racism, and heŌĆÖs raised eyebrows by accusing Colin Kaepernick of being a civil rights activist just because heŌĆÖs an ŌĆ£attention whore.ŌĆØ

On Wednesday, Whitlock tried to go the race route when he and Wiley had Fury on their show. The first fight had some racial elements present in the pre-fight build, he started to say. Fury broke in and said, ŌĆ£WeŌĆÖre all human beings, it doesnŌĆÖt matter if youŌĆÖre black, white, pink or green. We share the same blood, we are humans!ŌĆØ The live audience whooped and hollered their agreement. ŌĆ£This fight isnŌĆÖt a racial war between blacks and whites.ŌĆØ

Good for Fury, for not taking any bait. I, too, applaud his ŌĆ£weŌĆÖre all human beingsŌĆØ stance. But also, itŌĆÖs not for me to say or even imply that this one or that shouldnŌĆÖt bring up the issue of race. I have to recognize the filters I see through, and the advantage I have felt being Caucasian. Stories about how Michael Bloomberg has to properly answer his push to ramp up ŌĆ£stop and friskŌĆØ donŌĆÖt hit me the same way as those who have been stopped and frisked because their skin tone is darker than mine.

Fury is right, we all are human beings, but too many people in power donŌĆÖt stop and think and summon from their empathy reservoir the indignities that black and brown, and others deemed ŌĆ£differentŌĆØ or ŌĆ£less thanŌĆØ by large blocks of society deal with. IsnŌĆÖt it maybe for Fury, with his white skin, to offer a ŌĆ£we are all the sameŌĆØ stance because he can drive a nice car around, and not get pulled over because a white cop thinks the car might be stolen?

ItŌĆÖs clear, this nation has far to go before all the people see race through the Fury lens ŌĆö and more, much more, discussion will have to take place for us to advance meaningfully as a society that is really, truly color blind.