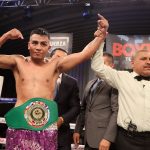 Mauricio Pintor wants to make a name for himself despite living in the shadow of his famous uncle.

The fight will also mark the finale of the 2019 “Boxeo Telemundo” series.

Pintor will attempt to build on a second-round knockout victory over Miguel Angel Martinez in his last bout on July 26. He has won five of his last six bouts, with his only loss coming by split decision to Patricio Lopez Moreno in March 2017.

Nephew of former two-weight world titleholder and hall-of-famer Lupe Pintor, Mauricio was inactive between August 2013 and October 2016 due to a prison term for armed robbery. He was later exonerated when evidence proved he was not involved in the crime.

Promoter Tuto Zabala believes tonight’s fight between Pintor and Sosa will be a reflection of the ongoing success of the popular ‘Boxeo Telemundo’ series, which is in its 30th season.

“Friday should be a great fight between Mexico and Puerto Rico because of their aggressive styles,” Zabala told The Ring late Wednesday night. “Sosa trained in Mexico City to acclimate to the altitude. We have had a very good year and cannot wait to work on a successful 2020 campaign.”

Sosa stopped Argentina’s Miguel Angel Suarez in the opening round of his last bout on May 18. That victory snapped a three-bout losing streak.

In the co-feature, Jorge Anhuar Batalla (4-2, 2 KOs) will face Pedro Bernal (4-1, 2 KOs) in an eight-round clash between Mexico City lightweights.

Junior bantamweight Omar Bernal (4-3) will square off against Daniel Garcia (3-3, 1 KO) in a six-round bout.

Francisco A. Salazar can be reached by email at santio89@yahoo.com or on Twitter FSalazarBoxing