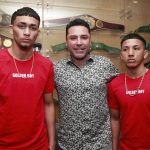 Stevens, 19, is a southpaw and the cousin of UFC fighter Max Halloway, but he’s also done plenty to build his own name in the ring. He won the 2018 Youth World Championships in Hungary, and won the 2019 National Golden Gloves. He’ll compete as a bantamweight as a pro.

“This is beginning to feel real now,” said Stevens in a press release. “The thought of turning pro and becoming a world champion was secondary to becoming an Olympian. But now I understand the amateurs were just a part of my journey and that those dreams are over with. Now, I am ready to turn the page to this new chapter of my life and showcase my talent as a professional. Waianae, Hawaii, we are on the map now. The world is watching, and I won’t let us down!”

Kaleiopu, 21, will box as a lightweight, and, like Stevens, hails from the town of Waianae. He was rated no. 5 by USA Boxing in his division at the time he left the amateurs.

“I thank God for allowing me to be in this position and to have Golden Boy promote me,” said Dalis Kaleiopu in the release. “This is a big compliment to my family and team for all the hard work we do together in and outside of the ring. Oscar [de la Hoya] was a great fighter, and he has developed champions all over the world. So, to be a Hawaiian from a small island in the middle of the Pacific Ocean makes me feel truly blessed to be in your stable amongst your great champions. Mahalo Nui Loa, Mr. De La Hoya and Team Golden Boy.”

Both are trained by Carlo “Nito” Tangaro and managed by Split-T Management. Kaleiopu could turn pro as soon as the Vergil Ortiz Jr.-Samuel Vargas card on March 28 in Los Angeles, while Stevens will “likely” make his debut in April, says manager Tim VanNewhouse.

“Dalis Kaleiopu is a huge kid for 135 pounds, so we look forward to seeing him grow in what is a very stacked division for us at Golden Boy. On the other hand, Asa Stevens is a slick, intelligent southpaw who without a doubt will enter the upper echelon of the division in just a few years,” added Golden Boy CEO Oscar de la Hoya.