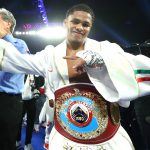 The grudge match between Shakur Stevenson and Joet Gonzalez did not live up to the hype. Instead, it turned out to be a one-sided victory for Stevenson.

In a clash of unbeaten featherweights, Stevenson defeated Gonzalez by unanimous decision Saturday night at the Reno-Sparks Convention Center in Reno, Nevada.

All three judges scored the bout 119-109 for Stevenson (13-0, 7 knockouts), who won the vacant WBO world featherweight title with the victory.

The fight became a grudge match between the two fighters over the last several weeks with regards to Gonzalez’s younger sister, Jajaira, who met Stevenson at the Olympic Training Center in Colorado when both were attempting to qualify for the 2016 Olympic Games.

The relationship between Stevenson also put a strain between Jajaira and Joet, along with father and trainer Jose Gonzalez. Both Stevenson and Gonzalez traded insults at one another through social media and even at a press conference last month to officially announce the fight.

Gonzalez (23-1, 14 KOs), who resides in the Los Angeles suburb of Glendora, was considered a significant step-up in opposition for Stevenson, but the 22-year-old from Newark, New Jersey made it look relatively easy. Stevenson effectively countered Gonzalez from the opening bell, connecting behind a jab and left crosses or right hooks to the head. Gonzalez’s game-plan of throwing one-two combinations had little effect as many of the punches missed or landed on Stevenson’s arms. Gonzalez also had to deal with Stevenson’s superior ring generalship and footwork, allowing him to keep his distance away from Gonzalez.

“It was a tough fight,” said Gonzalez after the fight. “I tried to close the gap, but he fought well from distance. I thought I was cutting off the ring, but my punches weren’t landing.”

Gonzalez did his best work in round seven, as he closed the distance and landed to the head and body of Stevenson. The rally was short-lived as Stevenson swung momentum back his way by keeping his distance, countering with uppercuts and crosses behind a steady jab.

The 26-year-old Gonzalez continued to walk Stevenson down during the championship rounds, but to no avail as Stevenson was effective in outboxing the Mexican-American fighter.

With the WBO title, Stevenson is now the second youngest world titleholder in boxing today. Lightweight Devin Haney, at age 20, was elevated by the WBC earlier this week to full titleholder status.

Even with the bad blood between the two fighters, Stevenson is willing to reconcile and move on.

“I came near to his hometown here in Reno,” said Stevenson, who is co-managed by James Prince, Josh Dubin, and Andre Ward. “I have nothing by respect for him. He’s a heck of a fighter. At the end of the day, this is a business. I didn’t want to fight to him. If he wants to be cool, we can be cool.”

“I want to ask (the Gonzalez family) a favor. Could you please talk to your daughter? Talk to your sister.”

Ask about who he wants to fight next, Stevenson called out IBF titleholder Josh Warrington.

“I want to fight Josh Warrington. Let’s get it. I want to become a unified world champion in 14 fights.”

Gonzalez, who is promoted by Golden Boy Promotions, did not appear to accept Stevenson’s statement of moving on. He sparred Stevenson before Stevenson turned pro in April of 2017.

“I’m down. I lost in my first world title,” Gonzalez said. “It was personal because he said a lot of bad things. We always made up with her (Jajaira). I don’t know why he is saying that. He was disrespecting my family. It doesn’t go away like that. He was a different fighter (than when I first sparred him) back then.”

Greer, who is ranked No. 9 by The Ring, defeated Nikolai Potapov by majority decision in his his last bout on July 13. He entered Saturday’s fight having won his previous 18 bouts in a span of almost four years.

Nieves, who is a banker in his hometown of Cleveland, had won his previous two fights after losing back-to-back fights to Potapov and then-WBO junior bantamweight titleholder Naoya Inoue. Greer was the aggressor throughout much of the first half of the fight. Nieves closed the distance at the midway point of the fight, making some of the middle rounds difficult to score.

Nieves scored a knockdown in round 10, as a right hand glanced off the top of the head of Greer. Despite the knockdown, Greer had accumulated enough points to grind out the decision victory.

“I found a way to win,” said Greer after the fight. “I know how to win. I walked home a winner tonight and he’s walking home a loser.”

Junior lightweight contender Mikayla Mayer stopped Argentina’s Alejandra Zamora after the sixth round of a scheduled 10-round bout.

Mayer, who resides in the Los Angeles suburb of Woodland Hills, improves to 12-0, 5 KOs.

The 29-year-old Mayer landed at will from the opening round, throwing and landing several combinations to Zamora’s head. A combination dropped Zamora (7-4, 1 KO) in round one, but she was able to beat the count and fight back.

Zamora was game, fighting back valiantly, but was outgunned, receiving several punches to the head as the bout progressed. As Mayer increased her aggression, walking Zamora down and forcing her to fight off the ropes.

After Zamora received a beating during round six, her father-trainer told referee Russell Mora to stop the fight to save his daughter from receiving further punishment.