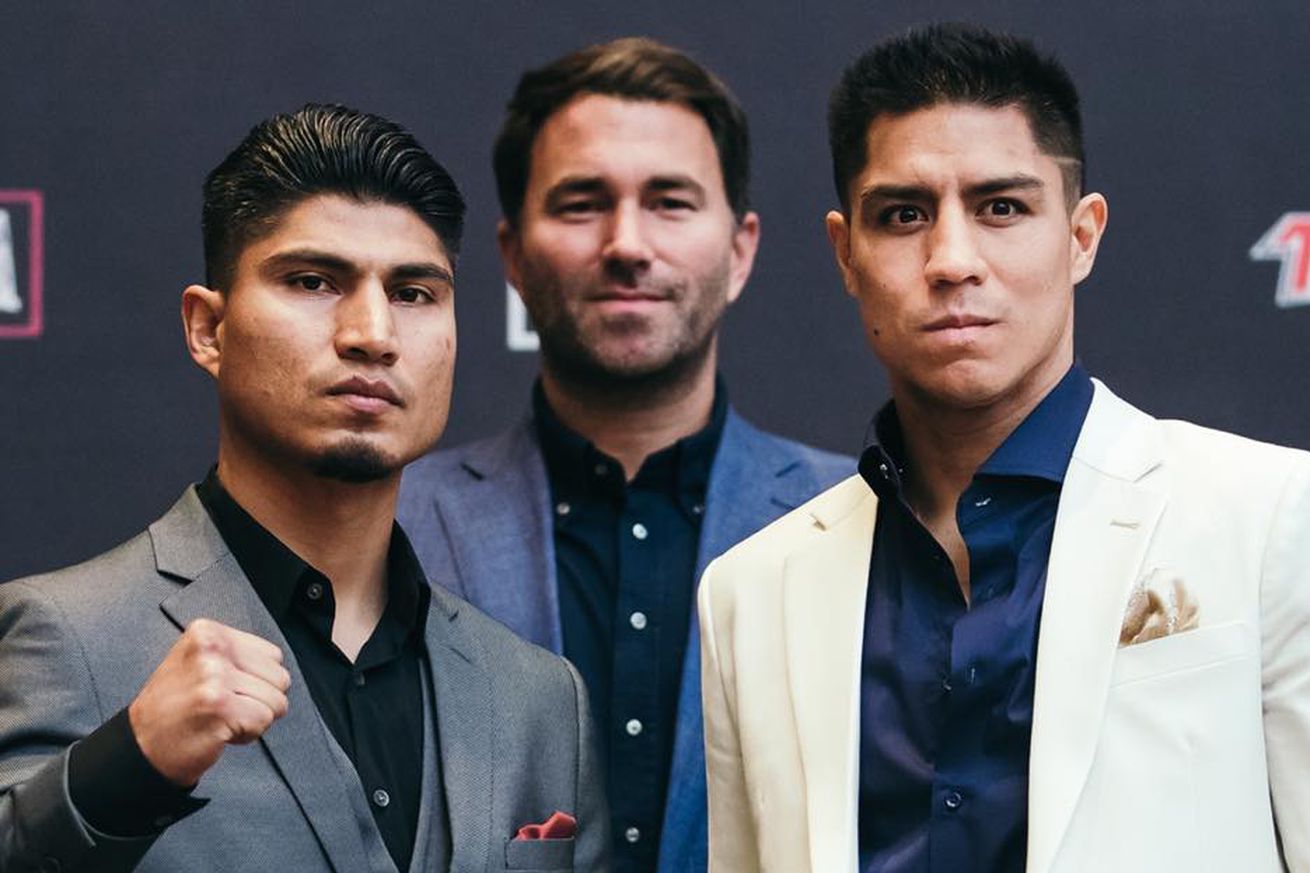 Who has the edge on Saturday? We make our picks for the top three fights on DAZN.

This Saturday night streaming live on DAZN, we’ve got two world title fights at 112 and 115 pounds, plus a welterweight main event with two veteran names looking to prove they still belong in the discussion.

I like Jay Harris and respect him taking this leap into a world title fight against a dangerous titleholder. It’s a big step up from the guys he’s been facing, but he’s also 29 and the shot is here for him to take. He took it. Good for him. He’s a good fighter who has some sand. But I think he’ll be outgunned here, just as Selby and Edwards and Rosales have been during Martinez’ breakthrough. JCM is the type who might get “exposed” a bit against a fellow top-tier fighter, but then again maybe not, at least for a while. It might take someone truly special to beat him at this point, because he’s really put it together as an offensive fighter. Martinez TKO-8

Didn’t we just see a Julio Cesar Martinez fight?! Boy, they’re keeping this little dynamo active. Martinez has fought four times in each of the last two years, and is obviously looking to keep up that pace with a two-month turnaround. Martinez is absolutely tiny but fights in an aggressively unorthodox style that’s really fun to watch. Martinez wings power shots from every angle with both hands and doesn’t look to do too much ‘boxing’ per se. That makes for entertaining fights and I expect this to be no different really. Martinez is going to come into this fight looking to dominate Harris, who has been fighting too much low level opposition for me to really feel confident that he’s ready to step it up in this outing. I see Martinez coming in and doing what he does best, overwhelming his opponent en-route to a first half stoppage. Martinez TKO-6

Cristofer Rosales had a reach advantage, plenty of experience in dogfights, and some serious power on his side. Martinez still battered him into submission. My hopes aren’t high for Harris, who has maybe one of those things.

Harris is plenty skilled and gritty, don’t get me wrong, but “willing to mix it up on the inside” is not a great descriptor to have against Mexico’s answer to the Tasmanian Devil. Harris is a guy who slugged it out point-blank with Paddy Barnes, absorbing some full-blown bombs from the smaller man before battering him into the ground. While the charitable among you could chalk that up to Harris simply disregarding the well-worn Barnes’ (lack of) power, all signs point to a close-range war that Harris simply doesn’t have the munitions to win. Martinez beats him down in a slugfest. Martinez TKO-7

With victories over Andrew Selby and Cristofer Rosales, coupled with a three-round beat-down of Charlie Edwards, you’d struggle to name many fighters who had a better 2019 than Martinez. “El Rey” looks big, strong and powerful at the weight and with a gung-ho approach looks favourite to drown any fighter than comes to trade.

Harris isn’t exactly a massive puncher and I can see Martinez gambling early with aggression in an attempt to walk through the Welshman. I think Martinez is going to win a lot of fans over the next couple of years. Martinez TKO-4

The second loss to Srisaket Sor Rungvisai in 2017 was ugly, but I think indicated that Srisaket was simply all wrong for Roman Gonzalez. Chocolatito is a pretty small guy at 115, Srisaket is huge at the weight and he’s a bruiser, too. Yafai is a good fighter, but he’s not a big puncher, he’s never faced a real top opponent — I don’t put the blame on him here, he’s been dying to step up the competition for a while now.

Yafai could certainly win this, but I think the pick you make depends on whether or not you think Chocolatito is washed. I’m not trying to put TOO much stock into his wins over Moises Fuentes and Diomel Diocos, but he looked sharp in both, didn’t show bad signs in those fights. Yafai is certainly a much tougher proposition, but I think we see the “old” guy pull another one out here. Gonzalez UD-12

This fight is really about how much Chocolatito has left, in my estimation. If both fighters were at their peaks I don’t think there’s much of a doubt that Gonzalez is clearly the better overall fighter, but Gonzalez is 32-years-old now which is getting up there for a super flyweight, and we’ve all seen the punishment he’s taken from consecutive fights with Srisaket Sor Sungvisai. Gonzalez did take some time off after those losses and has since bounced back against lesser opposition, but this fight should be telling as to where he’s really at.

For Yafai, he’ll be fighting the most experienced and celebrated fighter he’s ever seen before and he’s clearly hoping to add a win over Gonzalez to his resume. And to his benefit Gonzalez is much easier to hit these days than he has been in the past and I’m not exactly sure his power is translating up the scales. In fact, the more I think about it the more concerned I am that Gonzalez just might be a little too old, a little too small, and a little too worn at this point. I’m going to give the edge to Yafai to take the win on points. Yafai UD-12

What, in Kal Yafai’s three years as champion, has prepared him for Roman Gonzalez? A weight-drained, worn-down Luis Concepcion? Israel Gonzalez, who despite a one-sided loss to Jerwin Ancajas pushed Yafai to the brink? What can Kal Yafai lean on in the face of the one of the most potent offensive forces in modern boxing history?

Beats the hell out of me.

Yafai’s ideal fight, predicated on his stiff jab and some potent infighting, puts him squarely in Gonzalez’s wheelhouse, where the Nicaraguan’s power and fluidity reign supreme. Yafai’s bigger, sure, but he’s nothing like the monstrous physicality of Srisaket Sor Rungvisai. He can’t stand and trade with Gonzalez and the latter’s suffocating pressure means he doesn’t really have any choice but to do so. So long as there’s even a faction of “Chocolatito” left after two meetings with Srisaket, he outguns Yafai in a firefight. Gonzalez UD-12

I love this fight. Kal is one of the nicest, most modest world champions you’ll meet and his chance to rubber-stamp his position as a super-fly titlist comes against one of the modern-day greats of the sport.

”Chocolatito’s” ability to cut the ring off with ease and throw powerful combinations is a joy to watch. There’s no doubt he’s on the slide following that vicious KO to Sor Rungvisai, but in comeback wins since he’s shown his power still holds at the weight. Father Time creeps up on the little guys at a rapid pace and with 50 fights and 32 years under his belt, Gonzalez may well be primed for picking against a slick Yafai. Gonzalez has looked fleshy at 115-pounds, with his best work suited to flyweight.

We don’t really know how good Kal is. He’s been unable to pin down a career-defining win during his three-and-a-bit years as champion. If he can negate Gonzalez’s power and box to instruction off the back foot then I can see him edging out a tight decision over the distance. Saying that I’d love to see Gonzalez back to his best. Yafai SD-12

On the other hand Jessie Vargas simply is not an elite fighter and never has been, despite winning world titles at 140 and 147. Vargas is fully capable, but his best wins are nothing for the HOF resume, his losses are to the clear two best fighters he’s faced (Pacquiao and Bradley), and his 2018 draws with Adrien Broner and Thomas Dulorme were the sort of outcomes that show Vargas’ exact level. It’s not a bad level, but it’s not elite.

I’ve had trouble picking this one. I think Garcia is the more skilled boxer, but last time out we saw Vargas face a blown up lightweight (at best) in the veteran Humberto Soto. They fought at 151, and Vargas was able to bully and overpower the naturally smaller man. I think he’ll probably try that again here, but Garcia is younger, fresher than Soto, and frankly won’t be as likely to try trading with Vargas for no good reason. I’m taking Mikey to eke this on points. I think it’s going to be competitive, and I think Mikey’s going to really want to consider moving down to 140. Garcia MD-12

Mikey Garcia seems to be pretty determined to prove he can actually compete at welterweight following his one-sided loss to Errol Spence a year ago. And luckily for Mikey, he’s taking a considerable step down in competition to do it. That’s not to say Jessie Vargas isn’t a good fighter or anything - he’s technically sound and capable - but he has struggled once he started facing a certain level of opposition. In his last seven fights Vargas has dropped decisions to Manny Pacquiao and Timothy Bradley while also turning in back-to-back draws against Adrien Broner and Thomas Dulorme. So at age 30 with enough of a sample size, I think we’ve seen Vargas hit his peak.

The one thing Vargas has going for him in this outing is the fact that he’s much more comfortable fighting in this he welterweight division. I think that’ll be enough to give Garcia, who doesn’t look like a solid welter, some competitive rounds, but I just think Garcia is a better technical fighter than Vargas and that will see him through the fight. I’ll take Mikey Garcia to win a decision over the distance. Garcia UD-12

I’ve had a longer internal debate over this fight than I thought I would. Vargas is a hell of a lot better than his 3-2-2 skid would suggest, a skilled technician whose paltry knockout percentage doesn’t reflect his mean streak. Whenever I think to pick him, though, a little piece of my brain chimes in with “you remember how good Mikey is, don’t you?”

Garcia’s not a welterweight; hell, he’s barely a super lightweight, but Vargas is nobody’s idea of a power puncher and, though he has a reach advantage, Garcia has overcome a more significant one against Robert Easter Jr. Without access to the firepower or freakish pace that Errol Spence used to bury Garcia, Vargas is stuck in a technical clash with a top-notch technician. While Vargas may be too big for Garcia to put a dent in, Garcia lands the more meaningful shots to take a decision. Garcia UD-12

I can’t really envisage a big future for Mikey as a 147-pounder, so doubling down on his decision to jump into welterweight waters is more intriguing than it is exciting. Mikey dropped every round against Spence who used every bit of his weight and strength to break the heart of Garcia over 36 long minutes. Garcia looked sluggish towards the end of the fight struggling to hold the extra mass.

Vargas won’t hit as hard as Spence so Garcia won’t have to show the same respect as he did last March. Garcia’s boxing IQ and fundamentals are far superior to Vargas’ and he’ll probably rack up a healthy lead until the ninth or tenth round where body attacks from Vargas may prove to have the desired effect on Garcia’s tank. A late onslaught from the natural welterweight, Vargas, could make this watchable until the final bell, but in all honesty, it looks set up for a wide Garcia win despite a late Vargas flourish. Garcia UD-12