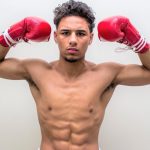 Best night of pro career and why: Ortiz is most happy with his win over fellow prospect Ricardo Quiroz at the Twin River Casino in Lincoln, RI in February 2019. Ortiz took Quiroz unbeaten record by besting him over eight rounds, winning six rounds to two, on all three scorecards.

“As of right now it has to be winning the WBC youth lightweight title,” Ortiz told The Ring. “It’s the first of what I hope will be many titles that I win.”

Worst night of pro career and why: The 23-year-old is happy with all his performances so far.

Next Fight: Ortiz kicks of his 2020 campaign against Luis Ronaldo Castillo at the Palladium in Worchester, MA. on Friday.

“I’m excited to be fighting at home in Worcester for the first time as a pro,” he said. “I know he’s taller than me, but I don’t know his fighting style because I’ve only seen a 30-second clip of him.”

Castillo won his first 15 bouts, all in Mexico, before tasting defeat for the first time. He has had five fights outside of Mexico, losing all inside the distance. The 21-year-old was stopped early last year by Abraham Nova (KO 1) and Gary Antuanne Russell (KO 1). He has since rebounded with two lower-level victories. Ortiz will be strongly favored but the manner of victory will be interesting.

Why he’s a prospect: Ortiz won two New England championships and was a 2015 National Golden Gloves silver medallist. He reached the semi-finals of the Olympic trials in 2016.

“I defeated Abraham Nova in my last amateur match,” he said. “I also won fights with Richardson Hitchins and Luis Feliciano.

“I lost to Teofimo Lopez in the championship final of the 2015 National Golden Gloves Championships. I lost to Gary Antuanne Russell, in the semifinals of the 2016 U.S. Olympic Trials, and Jaron Ennis.”

When asked to highlight his strengths, he pointed out two: “My ring IQ and ability to adapt to any situation.”

Ortiz’ adviser Richard Shappy feels his young charge has the potential to go all the way.

“For years, I kept telling Jimmy (Burchfield) that I was interested in getting involved with a boxer but that it had to be the right one,” said Shappy. “One day, Jimmy called to say this (Ortiz) is the one. I jumped on board.

Why he’s a suspect: It is still early in Ortiz’s career and he has to show he can fight above national level as a pro, something he didn’t do as an amateur.

However, he is clearly talented and is showing signs of improving. Ortiz is in a very deep division, so he would be well-served to learn his craft and wait for his opportunity. He is someone who could feature on ShoBox and could possibly target an NABF 140-pound shot later this year.

Ortiz is a decent hitter, he has a 50 percent knockout ratio, but he often has to go the distance.

“I’m always working to improve my overall game,” he said.

Storylines: Ortiz, who is of Puerto Rican and Dominican descent, was born and raised in Worcester, MA and is one of seven children. He father passed away when he was 15.

At an early age Ortiz visited a local boxing gym, which helped him learn a level of discipline.

“I got in some fights as a kid, nothing serious, but my life changed at seven when I first went to the Worcester Boys & Girls Club,” he said. “That’s where I learned how to box, and I’ve been going there ever since.

“I know kids there look up to me, so we talk a lot to each other. I show them some stuff and they show me what they’ve learned. I’d do anything for them because I remember what it was like when the older boxers spent time there with me.”

Ortiz hopes to follow in the footsteps of Worcester great Lou Brouillard; who made the central Massachusetts city his home after moving from Canada and went on to become a two-weight world champion and Leo Sawicki; a 1928 Olympic bronze medallist. In recent times, Ortiz has been inspired by vintage four-time national amateur champion Bobby Harris, Sean Fitzgerald, Edwin Rodriguez and three-time, two-division world titleholder Jose Antonio Rivera.

While his immediate future is boxing, he attended college at Wentworth Institute and later Worcester State University for two years and medical school could be in his future.

Like many other boxers his hero is Muhammad Ali.

“Not only because of what he did in the ring, but what he stood for as a human,” he explained. “I’ll always remember him for what he did outside the ring.”

Away from boxing he has a three-year-old daughter and works a day job as a full-time union carpenter. He likes to play basketball and to learn new things and is currently reading about the cardiovascular system. He also enjoys spending time with his family.