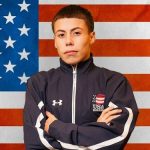 Amateur standout Marc Castro has signed a promotional deal with Eddie Hearn and Matchroom Boxing USA, it was announced on Wednesday afternoon.

The announcement comes less than a week after Castro signed a managerial deal with Keith Connolly.

No word yet on when Castro will make his professional debut but the signing of the 19-year-old was huge for Hearn as Castro was purused by several promoters.

“What can I say? We won the race to sign ‘The One,’ said Hearn. “Marc Castro is widely regarded as an absolute stud in the amateur game, an unbelievable fighter with superstar potential in the pro game. This young man is going to capture the hearts of American and Mexican fight fans and go all the way to the very top!”

Castro, who resides in Fresno, California, was a decorated star in the amateur ranks, which includes winning the National Silver Gloves three times and becoming a two-time National Junior Olympics champion.

Castro leaves the amateur ranks with 177 victories and only seven defeats.

“I am excited for this next chapter in my career,” said Castro. “I achieved so much in the amateurs and I look to continue that success in the pros with the right team behind me.

“I am always in the gym perfecting my craft and have made countless sacrifices to be in this position and I am not stopping now. My pro debut should be announced soon. I’m ready to get to work.”

Connolly, who won the 2019 Boxing Writers Association of America (BWAA) Manager of the Year Award, is also ecstatic to work with Castro.

“Marc has all the attributes to become a superstar, both in and out of the ring. We will manage his introduction into the pro ranks to make sure he maximizes his potential. He will be a huge hit with fans and pundits alike and we are looking forward to working with Eddie, Matchroom Boxing and DAZN to introduce this future star to the world.”

Francisco A. Salazar has written for The Ring since October of 2013 and has covered boxing in Southern California and abroad since 2000. Francisco also covers boxing for the Ventura County (California) Star newspaper, BoxingScene.com and FightNights.com. He can be reached by email at santio89@yahoo.com or on Twitter @FSalazarBoxing.