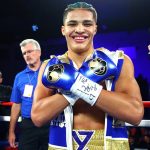 Welterweight prospect Xander Zayas was successful in his much anticipated pro debut, knocking out Genesis Wynn in the opening round Saturday night at the Reno-Sparks Convention Center in Reno, Nevada.

There was no feeling-out process for the 17-year-old Zayas as he came out throwing punches from the opening bell. Zayas dropped Wynn about a minute into the round and, even though Wynn beat the count, it did not look the four round fight would go the distance.

Moments later, Zayas landed an overhand right to the head, followed by another overhand right, dropping Wynn to the canvas. Referee Jay Nady immediately waved the fight over at 1:24.

Zayas, who is managed by Peter Kahn, made headlines back in March when he signed with Top Rank at the age of 16, becoming the youngest fighter to sign a promotional deal in the United States.

After growing up in San Juan, Puerto Rico, Zayas moved to Sunrise, Florida to live and train. He is also a senior at a local high school.

Bell scored the most-important win of his young career in his previous fight on June 15, defeating previous-unbeaten Andy Vences by unanimous decision.

The 26-year-old Bell was content to outbox De Alba, moving in and out and connecting with lead and counter right hands to the head. The shorter and southpaw De Alba did little to fight back, hoping to land a counter or one-two punch combination, which was rare.

As the fight reached the midway point and carried into the second half, the crowd booed the lack of action. Bell continued to outbox De Alba until the final bell sounded.

Junior lightweight Andy Vences of San Jose bounced back from his defeat from Bell to defeat Mark Bernaldez (19-3, 13 KOs) of the Philippines by unanimous decision over eight rounds.

Jason Sanchez (15-1, 8 KOs) of Albuquerque dropped Brazil’s Adeilson Dos Santos (19-7, 15 KOs) twice in round four, the final time for good at 2:59. Sanchez was coming off a decision loss to then-WBO featherweight titleholder Oscar Valdez on June 8.

Heavyweight Jared Anderson was successful in his pro debut, knocking out Daniel Infante (1-3) at 54 seconds of the opening round.