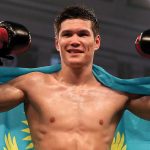 Daniyar Yelussinov, the 2016 Olympic gold medalist from Kazakhstan, will get his first significant step-up in competition when he faces former unified junior welterweight titleholder Julius Indongo on April 17.

The ten-round welterweight fight will be part of the Regis Prograis vs. Maurice Hooker card, which takes place at the MGM National Harbor in Oxon Hill, Md.

The news was first reported by Mike Coppinger and confirmed to The Ring by Yeleussinov’s manager Ziya Aliyev.

The 28-year-old southpaw Yeleussinov (9-0, 5 knockouts) has been based out of Boynton Beach, Fla. for the past seven months, and trains in Delray Beach with his father Murat Yeleussinov and assistant trainer Gary Clark.

That duo was the team he brought into the ring for his last fight, a fifth round TKO of Alan Sanchez on the Jacobs-Chavez Jr. card in December.

Yeleussinov hasn’t faced anyone in the pros as experienced as Indongo (23-2, 12 KOs). The 37-year-old from Namibia knocked out Eduard Troyanovsky in 2016 in the first round to win the IBF 140-pound title, and defeated Ricky Burns in 2017 to annex the WBA title.

His rise in the boxing world was halted later that year, when Terence Crawford knocked him out in three rounds to create an undisputed champion at 140 pounds, and a second round stoppage to Prograis in his next fight set him back even further.

Indongo is coming off a second round stoppage win over Carltavius Jones Johnson last August in Alabama.

“For me it will be a very good test, good step up, and it is very important to me to show myself,” said Yeleussinov, who turned pro in April of 2018. “I am gonna show a great fight and all my skills.”

Aliyev says he hopes to add a minor title from one of the sanctioning bodies to earn the winner a world ranking at 147 pounds. With a strong performance, he believes Yeleussinov could be ready for a world title shot after one more fight.

“Sometimes it’s hard to get the fighters that we want, because there were a lot of names that we tried to get but there’s always some issues. They’re going back down on the weight, some of them trying to recover off a loss. When the matchmaker of Matchroom Boxing, Eric Bottjer, offered us Julius Indongo, we say yeah, let’s go,” said Aliyev.

“It’s time for Daniyar to show that he’s not just an Olympic gold medalist, but he’s real professional boxer.”