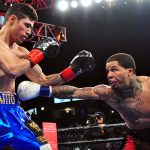 Two-time world junior lightweight titleholder Gervonta Davis will move up in weight to face Yuriorkis Gamboa on Dec. 28, it was officially announced Saturday night. At stake will be the WBA ‘Regular’ world title belt.

The 12-round bout will take place at the State Farm Arena in Atlanta, Georgia. The fight will follow the light heavyweight bout between Jean Pascal and Badou Jack.

Davis (22-0, 21 knockouts), who was at Saturday’s night Showtime telecast in Reading, Pennsylvania to promote the fight, has made quick work in his two fights in 2019, both in defense of his WBA junior lightweight world title belt. In his last bout on July 27 in his hometown of Baltimore, Davis stopped mandatory challenger Ricardo Nuñez of Panama in the second round.

In his previous fight on Feb. 9, the 24-year-old stopped late-sub Hugo Ruiz of Mexico in the opening round in Carson, California.

Mayweather Promotions, which promotes Davis, has looked into promoting a major fight card in Atlanta, where Davis spends much of his time in besides Baltimore.

“This event is a great way to top off the holiday season and 2019,” said Leonard Ellerbe, CEO of Mayweather Promotions. “We’re looking forward to lighting up the city of Atlanta with a spectacle headlined by the most exciting fighter in boxing, Gervonta Davis, taking on a seasoned and fearless warrior in Yuriorkis Gamboa. Gervonta spends a lot of time in Atlanta and he wanted to bring his talents to his second home where he plans to put on yet another electrifying performance.”

Davis, who made his pro debut at the age of 18, believes he can achieve as much success as a lightweight as he did at 130 pounds.

“I’m excited to head south for the holiday season and put on a great show for the city of Atlanta on Dec. 28,” said Davis, who is trained by Calvin Ford. “It’s been a long time since a boxing fight of this magnitude has come to the city and I’m proud to be able to give lots of excitement to a city where I’ve spent a lot of my time.”

“Some of the greatest boxers in the Hall of Fame have won title in multiples weight divisions and I’m no different. I expect as much success at 135 pounds as I had at 130 pounds. Yuriorkis Gamboa is a respected name in boxing and has achieved high levels of success in both the Olympics and as a professional. I expect him to bring out the best in me and I will be ready for it.”

Gamboa (30-2, 18 KOs), who is originally from Cuba and now resides in Miami, Florida, knocked out Roman Martinez in the second round of his last bout, which occurred on the undercard of the Davis-Nunez fight in Baltimore. He has won his last four bouts since losing by knockout to Robinson Castellanos in May of 2017.

The 37-year-old is best remembered for his all-out war against Terence Crawford in June of 2014 before losing by knockout in round nine. His best days are behind him, but Gamboa believes he has the experience and fortitude to defeat Davis.

“I am blessed to have this amazing opportunity to become world champion once again,” said Gamboa, who has won world title belts at 126 and 130 pounds. “I have been hoping that this opportunity would be against Gervonta Davis as well. I love and embrace the role of underdog that I have in this match because it will be the ultimate motivator. For the first time in my career, I will be involved in a high-profile bout in which I am not coming in at a disadvantage.

“Gervonta is an excellent fighter, but he has yet to face anyone like me. All the sacrifices I have made in my career and my life – leaving Cuba and coming to this country to find a better life for my family – will finally pay off on Dec. 28.”

Because of their styles, the 36-year-old believes his fight against Jack will steal the show.

“After the Browne fight, I asked my team to get me back in the ring before the end of the year and they delivered,” said Pascal. “Everybody knows I come to fight, I’m a warrior and it’s the same thing for Badou. We both have proven to be boxers that want to fight the best in the world. Now we’re fighting each other, so you know it’s going to be fireworks.”

Jack (22-2-3, 13 KOs), who is originally from Sweden and now resides in Las Vegas, has not fought since Jan. 19, when he lost by decision to Browne. During the fight, he suffered a nasty cut on his forehead that required him to take off to let the wound heal.

Despite having won once in his last four bouts, the 35-year-old believes he can still contend in a very competitive division.

“Expect to see me stronger, smarter and more experienced on December 28. I’m looking forward to getting my belts back and becoming a three-time world champion. I respect Pascal and consider him a friend, but business is business.”